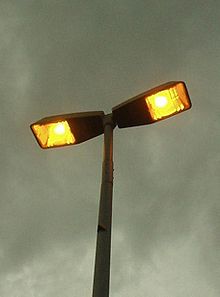 A sodium vapor lamp is a gas discharge lamp . During the gas discharge of the vapor of the element sodium , there is an emission of practically monochromatic light .

Spectral distribution of a low-pressure sodium vapor lamp at a wavelength of approx. 590 nm

The sodium vapor lamp belongs to the category of metal halide lamps. Unlike fluorescent lamps , sodium vapor lamps do not require a fluorescent fluorescent material. With these lamps, the gas discharge itself generates visible light and it does not have to be converted into this first. This significantly increases the efficiency , especially since the human eye is particularly sensitive in this color range.

Cold sodium vapor almost exclusively emits light with wavelengths of 589.00 nm and 589.59 nm ( sodium D lines , sodium double lines), so it is almost monochrome. Photons of that frequency will be at the transition of electrons from or in the state sent the sodium atom. The level is split into two sub-levels through spin-orbit coupling .

During a cold start, sodium vapor lamps shine reddish due to the dominance of the neon starter gas . In this state, its light dominates, as sodium only has a vapor pressure of 10 −8 Pa at 20 ° C. Only when the neon gas is discharged does the lamp steadily heat up to over 300 ° C with a vapor pressure of then over 3 Pa, so that the light color is only dominated by the sodium after a few minutes .

The mercury vapor lamp and the xenon gas discharge lamp have similar principles .

The high pressure sodium vapor lamp (also called HS lamp) has a light output between 60 and 150  lm / W ( lumens per watt ) and is available in outputs from 35 watts to 1000 watts. For street lighting , outputs of 50 to 150 watts are common, with the latter having a light output of around 120 lm / W. These lamps use sodium amalgam internally . By adding certain noble gases (mostly xenon ), a certain amount of blue can be achieved with this type of lamp, thus improving the color rendering.

High pressure sodium vapor lamps consist of a discharge vessel (burner) filled with sodium and a noble gas. This is located for thermal insulation in an evacuated glass flask in the shape of a tube or ellipsoid . The gas filling is under high pressure when the lamp is in operation. Because of the high operating temperature (approx. 1000 ° C), the burner is made of highly pure, transparent aluminum oxide ceramic. The electrode connections are made of niobium . The burner is fixed in the glass bulb by strong metal wires, which also serve to supply power. The contact between the lamp and the lamp base is usually made via an Edison thread in the sizes E27, E33 or E40. The protective glass bulb reaches temperatures of over 300 ° C during operation. A voltage of up to 5 kV is required for ignition.

After ignition, the high pressure sodium lamps initially only glow weakly. After four minutes, enough sodium is in the gas phase so that full brightness is achieved. After being switched off, the lamps usually have to cool down until the internal pressure has dropped before they can be switched on again with standard ignition devices. There are ignitor variants in the form of instant igniters or hot igniters that are able to ignite high pressure sodium lamps that have been switched off shortly before. The hot igniter has ignition voltages of over 30 kV, which also ionize the discharge path of a hot high-pressure sodium vapor lamp. This procedure is only possible with double-ended lamps in order to avoid flashover .

The end of the useful life of high-pressure sodium vapor lamps is indicated by periodic extinguishing and re-ignition. This process is called "blinking" or "cycling". After the lamp has ignited, its operating voltage increases slowly and, due to the aged gas filling, reaches a value that exceeds the mains voltage supply. The lamp goes out. After cooling down, the lamp ignites again and the process starts again. The cycle time is typically in the range of 10 to 15 minutes. In order to suppress the resulting flashing light operation, special ignition devices have automatic cycling detection. The automatic switch-off kicks in and prevents further attempts to ignite if the lamp has gone out three times within two hours as the operating voltage increases.

Low-pressure sodium lamps (also known as LS, NA or SOX lamps) are among the most efficient electrical light sources currently available. With up to 206 lm / W they enable efficient and energy-saving lighting, which due to their monochromatic character (color temperature 1800 K) can only be used where color fidelity is not important (streets, intersections, industrial plants).

In contrast to high pressure lamps, the operating temperature is significantly lower, and their light also appears reddish with a color temperature of 1800 K compared to high pressure lamps with 2000 K or more. For ignition, voltages in the range of 1 kV are sufficient; depending on the version, the available mains voltage is sufficient. After a cooling time of two minutes, it can be ignited again. Low-pressure sodium lamps have a significantly larger discharge vessel than high-pressure sodium lamps and therefore need significantly longer until they are fully bright. They are usually designed as a U-shaped tube, which is located in the protective cover of a glass bulb. This envelope bulb is often provided with an infrared-reflecting coating that keeps the operating temperature high, especially outside. Their operating current of around 330 mA is set by appropriate ballasts .

The distinctive yellow sodium low-pressure lamps are found wherever there is no great demand for color perception, for example to illuminate streets, large squares, courtyards, prison walls or to highlight special areas in color - such as pedestrian crossings or tunnel breakdown bays - in order to attract increased attention .

The SOX-type sodium vapor low-pressure lamps commonly used today are only available with a BY22d bayonet base common in Great Britain and not with the Edison socket (screw thread) common in Germany .

The bayonet connection ensures the correct position of the lamp in the luminaire. Low-pressure sodium vapor lamps up to 55 W may be operated vertically (± 15 °) with the socket facing up and horizontally (± 20 °); With more powerful lamps, only horizontal operation (± 20 °) is possible. The correct operating position prevents condensation of the sodium on the electrodes.

The power range of commercially available SOX lamps starts at 18 W (1800 lm) and ends at 180 W (32,500 lm). In the 1980s, SOX-E lamps came onto the market, the main feature of which is that their energy efficiency is further increased due to less heat loss. The mean service life (50% probability of failure) is given as 18,000 hours.

In the 1960s, the Disney studios developed a process for film assembly that exploited the insensitivity of film emulsions (also for the color film of the time) and was called “yellow screen” or “sodium vapor process”. For example, actors could act in a studio shot in front of a screen illuminated with sodium vapor lamps and a special camera exposed two films at the same time through a semi-transparent deflecting mirror . One film recorded the scene itself in the entire spectrum that color film at the time could reproduce. The second film was sensitive only to the narrow spectral band of the sodium vapor lamp and thus created a so-called “Traveling Matte”, an animated mask that allows a background image to be played in precisely.

Compared to rear projections , this method had the advantage that the scene can be better illuminated without weakening the contrast of the background scenery. The blue screen technology , which was also known at the time, produced annoying blue color fringes on the contours between scene and background that did not occur with the yellow screen process. With the improvement of the blue screen technology, this procedure lost its importance due to the greater expense. Well-known films in which the sodium vapor lamp process was used are Mary Poppins and Alfred Hitchcock's The Birds .

Due to their emission maximum, sodium high-pressure vapor lamps are well suited as additional lighting ( assimilation light ) in the cultivation of ornamental plants under glass. In addition to a broadening of the Na emission lines in the yellow area, these lamps also have a line in the red area. Since photosynthesis (depending on the type) mainly takes place at 670 nm, this light component in the longer-wave (red) range is important for use. Because of the more pleasant light color, it can be used for terrariums near living rooms. In contrast, low-pressure sodium lamps, which emit exclusively and in a narrow band at 590 nm, are insufficient in terms of color matching.

Use in the theater

The sodium vapor lamp is often used as an effect light in the theater. The almost complete disappearance of all colors when illuminated exclusively with sodium vapor lamps is an intended stylistic device. The slow glow from the dark with its color gradient can also occasionally be used as a mood. Since the sodium vapor light cannot be dimmed or can only be dimmed with difficulty, depending on the ballast, there are various attachments for the luminaires that use slats to enable a fade-in and fade-out effect.