The color-based image exemption (Engl. Chroma keying ) is a method in the film and television technology, which allows to place objects or people afterwards before a background that either a real movie recording (such as landscape) or a computer graphics (eg background in news broadcasts) may contain. 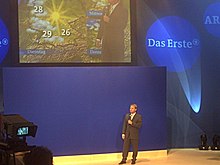 Use of blue screen technology for the backdrop at IFA 2005 in Berlin. The TV weather report ( ARD ) and presenter visible in the upper area of the screen is a rear or front projection of the finished TV image for visitors to the exhibition hall.

For this purpose, a person or an object is first recorded in front of a well-lit background surface of the selected key color. The two background colors blue and green were chosen because they usually do not occur on the human body and because they stand out well against skin tones. In order to avoid apparent projections of the background on the object to be exposed and thus avoid keying errors, clothing, for example, should consist of materials that are as little reflective as possible and not have the background color.

The next step is to crop the captured object, i.e. H. to cut this out of the recording. For this purpose, a cut-out mask is used that indicates the visible and invisible image area. The invisible area is defined by the fact that it appears in the key color in the image. In other words: everything that was recorded in the key color is removed from the image.

The process of clipping is also known as matting or keying . Finally, the new background film and the cut out foreground film are combined. This process is known as punching in technical jargon .

An early form of blue screen technique was first used in the 1933 film King Kong . For black and white films, the background is kept black or masked out in black. In the negative copy , the black appears colorless. In the motion picture film , which contains the planned background, the area in which the actors act is masked. In the next copying step, both films are placed on top of one another and both are recorded together. With black masking (when shooting or in the copy studio), the film is not exposed in these areas, opaque in the negative, only black in the following positive and opaque in the next negative. This frequent “copying” on an optical bench inevitably led to a loss of quality (mostly in the background). The (old) complex blue screen technology could be avoided by background projection (for example studio recordings “in the car” with a landscape passing by in the background).

The first movie that worked with a real blue screen was The Thief of Baghdad (1940); the film technician Lawrence W. Butler , who created the optical special effects in this film, received an Academy Award for it that same year . Due to the immensely time-consuming process at the time, it took a few years for this to happen. a. thanks to films like The Old Man and the Sea (1958) and Ben Hur (1959) had his final breakthrough. In Germany, the blue screen technology was introduced in the 1960s; Several scenes of the television series Raumpatrouille were shot with it.

When television similar methods (be blue box ) were used. These became known in Germany primarily through the dialogues between the show master Wim Thoelke and the cartoon character Wum created by Loriot in the ZDF shows Drei Mal Neun and Der Große Preis . It was also used in the lavish production of the series Die Menschen vom Domplatz .

In analog broadcasts of local television stations, the procedure was reversed for the insertion of station logos ( corner logos ). The black background of a station logo has been replaced by the actual content of the film. This technology was replaced by the inclusion of transparent logos ( alpha channel ) with the help of font generators, the fill and key signals of which are punched by the transmitter mixer into the transmitter output, or by appropriate logo inserters .

Green screen during outdoor shots for the film Madame Nobel (2014)

In recent years, the use of green as a key color has emerged as an alternative (“green screen”). There are different opinions on the question of whether green or blue achieve better results, so that both colors are used in the film industry. For green it is noted as positive that green backdrop color more easily produces a light, luminous color impression, which then differs from other color nuances in the film material. It is also stated that in modern video cameras each pixel is made up of one red, one blue and two green pixels (→ Bayer sensor ). Green screen recording is therefore better suited for video in particular, since there is twice as much image information for the color green as for blue.

Another reason for using green is that this tone is almost non-existent in a person's skin color. This consists largely of red tones and a small proportion of blue tones. In this way, the software can define the background more precisely.

A virtual studio is a television or film studio that is set up using blue screen or green screen technology. It is often used in news studios, e.g. B. at ZDF or RTL , where 3D graphics are used to give the viewer the impression of a real backdrop.

A big problem with using green screen is lighting. The background and the person or object in the foreground should be lit separately so that as few shadows as possible fall on the green screen. For this purpose, soft boxes or matte boxes are used, which cast a soft light and create soft shadows that can be removed by the software more easily and with less effort. Hard shadows that are not removed can then be used again in the image. However, it is easier, cheaper and takes less time if the shadow is created and inserted afterwards.

If the person wears white clothing or is too close to the background or if it is illuminated too strongly, so-called spill occurs: The green of the background is reflected on the white garment and cannot be completely removed later. Spill also occurs on the skin or e.g. B. as a reflection in glasses. The skin can either be helped with matt make-up or a so-called edge is set with lighting from behind, which prevents spillage. In the case of glasses, this can either be masked off and subsequently reinserted as animation using a computer, or it is treated with a spray that makes the glasses anti-reflective.

Problems can also arise with close-up shots of eyes that match the color of the background. The eyes have to be cut out and tracked to protect them from being removed from the background.

To prevent spill, the unneeded green screen with z. B. covered with a black molton and only the area behind the person left free.

Green screen in the TV studio

In modern digital processing of film and television, any color can be used to define the template. In general, one then speaks of the chroma key procedure (English chroma key , colored key key ).

In March 2018, Google introduced a YouTube app with artificial intelligence that can exchange the background in the video in real time. The complex green screen technology was previously required for this technology. With the current technology, the background doesn't matter. The AI ​​recognizes the people or objects in the foreground and simply cuts them out of the video.

During the production of The Mandalorian in 2018 came during the filming in the studio instead of green screens and CGI from LEDs existing video walls used on which the environment or the background (the scene image was) to play or display. For example, the surroundings of the actual locations were recorded with actors before the shooting and these recordings were then built up into a virtual space (as in computer games) using the Unreal Engine 4 developed by Epic Games . This Stagecraft technology, christened by ILM, made it possible to display a recording tailored to the respective viewing angle on the video walls. A useful side effect is that it helps actors empathize with scenes. In addition, the effort and logistics costs that would have arisen if the shoot had not taken place in the studios are reduced.