A negative film is a photographic film that, after its development, has gray values or colors in the opposite ( complementary ) tone values. The tonal value inversion requires and enables a positive image or any number of positives in a second photographic process. 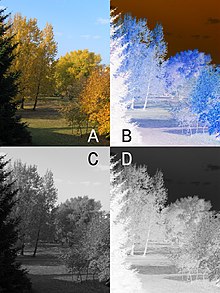 In addition, there is the so-called reversal film (slide film, reverse motion picture film), which, after more complex development, shows an image of the subject with the same brightness and color.

Almost all silver films used in amateur photography today are negative materials. Individual black and white slide films, namely Fomapan R and Agfa-Scala, are developed into positives in the laboratory with a special processing.

Today, color negative films are built up as multi-layer films that are processed using a chromogenic process and have an orange-colored masking.

In professional film technology, too, one works with negative motion picture film and positive copies ( film editing ), which are created on special " positive film " (a high-quality negative film). Reversal film, on the other hand, was used in the amateur field and for television reports, where no screening copies had to be made and speed was required.

For special applications or effects, negative film can be developed using the E-6 process, which is actually intended for reversal films. The result is a low-contrast, pastel-colored positive with an orange cast. The process is called cross development .

The optimal setting of the apparatus and the chemical processes is done with the help of setting negatives .