In analog photography, development is the chemical amplification ( photographic chemistry , photochemistry ) of the image, which is invisible after exposure, on plate , film or photo paper and other photographic materials to form a visible negative or positive . The chemical reactions take place in an aqueous solution of suitable chemicals.

Although the actual development process is only the first part of the entire photochemical processing process, the term is generally equated by end users with the entire processing chain: starting with film development, continuing with fixing and film cutting to the production of enlarged positive images from the negatives . The subsequent digitization of the negatives, photos and slides recorded with analog technology and the storage of the digital data obtained on data carriers are also part of the development with this approach.

For photographers and cameramen , “development” only means the photochemical development and the fixing of the recording material (negative or reversal film). The development is only part of the optical-photographic or digital post-processing.

The process was invented by Maddox (1871) and Bennet (1878) about 130 years ago and has now been largely superseded by digital cameras.

During the exposure of a film, only relatively few of the silver ions (Ag + ) present in the silver salt crystals of the photo emulsion layer are reduced to metallic silver atoms by the action of light . These silver nuclei form the “latent image”, which is invisible due to the small amount and size of the silver nuclei. The developer autocatalytically enlarges the small silver crystals (Ag) present at the exposed areas . The silver ions (Ag + ) of the silver salt that are in the immediate vicinity of germs are also reduced to silver. The finely distributed metallic silver acts in transmitted light z. B. black in an enlarger . The picture is now visible. When developing orthochromatic and unsensitized materials, this process can be observed in subdued, red light with eyes that are sufficiently dark-adapted.

Development of a black and white film

Film spiral and other parts of a daylight developing can

The process steps during development are shown here using the simple example of developing a black and white film , picture or photo plate using the resources of the photo home laboratory: 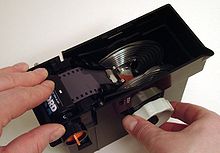 Winding a 35mm film into the film winding spiral

Since the exposed film has to be developed in complete darkness, a light-tight developing container is generally used in the home photo laboratory. First, the film is wound into the spiral-shaped spool of the developing box in the darkroom or in a light-tight changing bag. The film spiral provides the necessary space between the film windings and thus ensures that the photo baths have an even effect. Depending on the model, one or more of these coils fit into the light-tight development tank. After closing the container lid, which is equipped with a filling / pouring device for liquids, the following steps take place under normal lighting. As a special feature, the daylight box shown in the example photos (Agfa-Rondinax, patent in GB 1935, D unknown) enables film to be developed entirely without a darkroom, as the built-in winding device enables film to be wound in with the lid closed.

The film is processed with a developer bath, usually at 18 ° C to 20 ° C, according to the manufacturer's time and temperature specifications. The developer solution is mostly basic (pH value 8 to 9). By varying the development time, both the film and the paper image can partially correct the density and contrast.

The movement during development is necessary to prevent local differences in the concentration of the developer substances in the solution. In the case of the daylight box shown, the film spiral is rotated with the rotary control on the side , with the development boxes common today by regularly tilting the box, which is closed with an additional watertight lid.

The development itself already gives a visible image, which is not stable under the influence of daylight: the silver bromide (AgBr) still present in the unexposed areas would over time, solely through the action of light, become more and more silver (Ag) and bromine (Br 2 ) converted, so become black. With conventional black and white materials, the visible image consists of metallic silver.

The fixer serves the purpose of making the developed image permanently lightfast. The fixing bath ( sodium or ammonium thiosulphate solution ) converts the sparingly water-soluble silver salts into an easily soluble form. Since the metallic silver is also attacked at the same time, the fixing takes place according to the manufacturer's instructions and depending on the exhaustion of the reusable fixing bath. Two to three times the so-called clearing time can be used as sufficient fixing time for films and plates. The clearing time is the time after which the initially cloudy image layer has become clear. With freshly prepared express fixing baths based on ammonium thiosulphate, the clearing time for 100 ASA films is around 30 seconds; for more sensitive films it can be up to 3 minutes. The fixer is considered exhausted when the clearing time has doubled for a certain type of film. 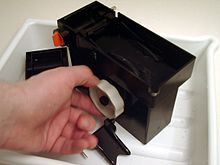 The photo chemicals are washed out during the final wash.

In the last step, the washing, with multiple or continuous water exchange, the complex compounds and the remnants of the fixer are washed out of the emulsion. Since the substances are removed from the emulsion by diffusion , the final washing must be long enough to achieve lasting stability of the film or the image.

Finally, the surface tension of the water can be reduced by adding a wetting agent . This allows the water to flow off the film better and prevents the formation of drops on the film surface, which would otherwise lead to limescale stains when the film is then dried. The wetting agent basically works like the dishwashing detergent, but does not contain any coloring or fragrance additives. Wetting agent concentrates for the photo laboratory are often additionally provided with film hardening and preservation aids.

After successful development, the film is ready for drying

In the home laboratory, drying takes place by hanging the wet film upright with film clips in a room that is as dust-free as possible or (ideally) in a drying cabinet. In order to speed up the process, the film strip can be treated beforehand in a drying bath (usually methanol) or the coarse liquid residues can be removed from it with stripping pliers.

The dry film is cut into practical sections of 4 to 6 negatives per film strip (for 35mm film). These can then be archived, for example, in A4 sheets made of glassine and / or acetate film in an office folder.

Black and white films, photographs, and photographic plates are some of the most durable media known. The recording of documents on microfiches is therefore still used for permanent archiving.