Autocatalysis ( gr. Αυτοκατάλυση, aftokatálissi : "the self-disintegration") refers to a special type of catalytic chemical reaction in which a final product as a catalyst is effective for the reaction. The continuous formation of this catalyst accelerates the reaction as long as there are still enough starting materials available. It is a positive feedback . 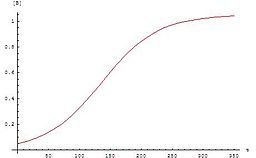 Sigmoid variation of the product concentration in autocatalytic reactions

This differential equation (DGL) is solved by deriving an expression for from the conservation of mass and expressing it as a variable :

This then gives the DGL:

Which solves as follows:

The following results analogously for :

The presence of one or more autocatalytic steps can lead to chemical oscillation .