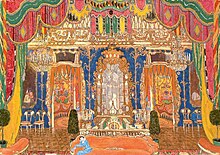 Stage design refers to either the visual design of a scenic space or its material, i.e. all furnishings, paintings and backdrops as well as the stage machinery that make up stage sets. They are used for drama and opera performances, musicals , choreographies , performances and films .

Depending on the requirements and the form of the performance, they have different functions: from illustrative decoration, which often depicts texts, to subjective architecture, which promotes and influences scenic processes, to room installations that enable a scenic arrangement. A stage design can define the scenic action spatially (room, town square, landscape, etc.) and temporally (historical, contemporary, etc.).

Stage designs are designed by stage designers and the execution is supervised. At larger venues they are made by the in-house workshops, for small theaters without their own workshops or for special performances such as installations in public spaces, specially assembled teams of craftsmen work.

Job description of a set designer

Draft of a stage set (around 1696) by Johann Oswald Harms for the opera Enrico Leone .

The set designer initially works closely with the director . He is commissioned by the theater management to stage a play, which he then works with the dramaturge in terms of content.

After analyzing the text and doing research , the set designer creates the first drafts . These images are often converted into true-to-scale models in which the spatial effect and the technical and scenic processes can be reliably simulated. In further cooperation with the director and dramaturge, a concept develops that visually supports the intended effect of the staging. This preparation phase can sometimes begin longer than a year before the premiere.

Scenery painting room of the Weimar Court Theater, newly built in 1907, around 1911

For the implementation, the set designer meets with the technical staff of the theater and presents his drawings and models.

In order to discuss the original dimensions , the impression and the modifications during the performance on site, a construction rehearsal is carried out mainly in German-speaking countries : the basic dimensions of the design are improvised on the stage with old decorative parts, fabrics, slats and standard components. Proportions, colors, lighting, etc. can be checked in original size and technical details can be clarified.

After the final changes to the design, the set designer, his assistant and the technical staff (technical manager or design office) create technical drawings that workshops can use to produce the decorative parts.

The workshops usually include a carpentry and locksmith's shop, responsible for supporting substructures; stage painters and stage sculptors also work there , who produce images, surfaces and plastic objects, as well as upholsterers or decorators who do fabric and upholstery work.

The set designer, together with his assistant, the stage master , the technical management and the workshop manager responsible for coordination, oversees the implementation process that is now beginning. At the same time, he must - in cooperation with the prop master - choose furniture and props or have them designed and manufactured.

At the beginning of the rehearsal work, the set designer and the other members of the directing team present the performance concept to the ensemble, usually using the model.

When the decoration parts are ready, they are put together in the technical facility on the stage. In this first setup, details are adjusted and the set designer sees the complete decoration on the stage for the first time. After the setup, changes can be made in exceptional cases. Here the timing, the financial means, the workshop capacity of the theater as well as the quality of the planning and the imagination of the set designer play an essential role. Assembly, conversion and dismantling as well as functionality are checked together with the stage technicians .

The stage has previously (sometimes together with a consultation with the Director lighting designer ), a lighting concept designed. This is done with the help of the model or increasingly with three-dimensional computer programs that precisely simulate the lighting. It often takes several days for all of the lighting moods to illuminate.

The set designer needs very good knowledge of lighting technology and color light mixing , because the visual impression is strongly influenced and the psychological effect of a set on the audience is determined by the lighting.

This is followed by the stage rehearsals in the original decoration, at which the set designer often has to be present, as fine adjustments are now necessary: ​​The actors who have previously worked in a rehearsal decoration with partially deviating dimensions have to "conquer" the "new" room, with life fill and learn how he defines the way you play. The first rehearsals with orchestra are now taking place in the music theater, in which the acoustic effect of the room is assessed.

As part of these rehearsals, the stage technicians familiarize themselves with the construction and conversion work and have the first opportunity to practice the sometimes complex processes that are invisible to the audience.

The creation of a theatrical performance is a constantly moving creative process of many artists whose direction can never be finally planned by the director. The phase of bringing together all the scenic elements can therefore be a beautiful or painful process for everyone involved.

For the mostly two main rehearsals, all decorations, props and costumes as well as the lighting should be completed. Now everything is set up to ensure that the evening runs smoothly, with the first main rehearsal taking place in the music theater with the piano and usually being devoted to the final stage direction and technical processes, while the second with orchestra is used for musical polish. During these rehearsals, detailed changes are made to the stage design, costume and lighting, and in the drama even to the text. It is customary to avoid further changes after the dress rehearsal that follows, which runs exactly like a performance.

The stage manager , who has already been present at many rehearsals, is now the invisible coordinator of the production. All technical and scenic processes run according to his signals and the actors step up and down. A sure instinct is required here in order to combine the concept of the equipment and the staging into a coherent form and to ensure that the performance runs smoothly.

Only the evening of the premiere shows, through the reaction of the audience and critics, to what extent the artistic energy of the work, ensemble and direction has actually found an effective place in the set.

Most stage designers have studied stage design at an art college for three to five years after internships and internships at theaters. But there are also autodidacts and career changers (e.g. architects). In 1917, for example, the painter Pablo Picasso designed the stage, including the curtain and costumes for the ballet parade .

Some courses in Germany, Austria and Switzerland that train to become a stage designer: