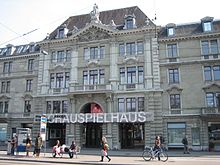 The Schauspielhaus Zurich is the largest theater in the city of Zurich . The large house is part of the peacock complex and has 750 seats. In the basement of the building there is the studio stage chamber for a maximum of 70 spectators.

The building at Pfauen was built in 1892 as the Volkstheater am Pfauen with a Bavarian beer garden and bowling alley and was initially used as a variety theater . In 1901 it was rented by the director of the opera house Alfred Reucker and opened as a theater with Goethe's The Accomplices . From 1903 to 1926 the theater was run by the private cooperative for peacocks .

In 1926 Ferdinand Rieser , Zurich wine wholesaler and director of the Schauspielhaus, acquired the building and had it converted. In 1938 the theater was taken over by Neue Schauspiel AG , which was founded by the city and to which Ferdinand Rieser leased the building. The then mayor Emil Klöti and the publisher Emil Oprecht managed to free the theater from its financial difficulties. When the lease with Ferdinand Rieser's widow expired in 1952, the citizens of Zurich refused to consent to the acquisition of the building by the city of Zurich for a purchase price of three million francs. The Swiss Bank Corporation was ready to step in as the buyer and sign a new lease agreement with Neue Schauspiel AG .

The efforts to establish a sophisticated theater in Zurich were initially unsuccessful; until 1933 the theater received little international attention. From 1933 onwards, many German actors and directors emigrated to Zurich and were accepted into the ensemble of the Schauspielhaus by Ferdinand Rieser. Therese Giehse , Albert Bassermann , Ernst Ginsberg , Kurt Horwitz , Leopold Lindtberg , Grete Heger and many others played on the peacock stage, some for many years. Walter Felsenstein also worked here during these years .

It was through these actors that the theater reached its climax as an emigrant theater during the Second World War . During this time, there were many anti-fascist plays on the program, including several pieces by Bertolt Brecht and by Swiss authors. At that time, the Zürcher Schauspielhaus was the only free stage in the German-speaking area, as only plays that were against the regime were allowed to be performed in Germany and Austria. The “Pfauensaal” is considered to be the most important artistic monument from the time of the spiritual national defense . He is a cultural-historical and architectural contemporary witness of national and international importance.

From 1938 on, numerous pieces by Bertolt Brecht were premiered here under the direction of Oskar Wältin . Most of the pieces by Max Frisch and Friedrich Dürrenmatt were also premiered at the Pfauen.

In 2002 and 2003 the theater experienced a new artistic boom under the artistic director and director Christoph Marthaler and was voted Theater of the Year twice in a row by the critics of the magazine Theater heute . Under Marthaler, however, the theater also experienced a decline in the number of subscribers, which, in addition to further disputes, led to an early departure of its theater team. He was followed by Andreas Spillmann and Matthias Hartmann by 2009 .

From 2009 the theater with its 260 permanent employees and an ensemble of around 30 actors was directed by the director Barbara Frey . When she took office, she named “balance and diversity” as the “central theme” for her program. Young and seasoned directors, great classics that work as ensemble pieces and a fragrance brand with new and dramatized materials. " In June 2017 it was announced that from the 2019/2020 season the director Nicolas Stemann and the dramaturge Benjamin von Blomberg will jointly take on the management.

The Pfauenbühne is a peep box stage . For the architect and playwright Max Frisch , it meant a timelessly valid form of theater: the peep box as a meaningful, elementary architectural element would remove things from their everyday surroundings, place them outside of time and give them the meaning of symbols.

In 2002, 2004 and 2007 Die Schöne Müllerin , Elementarteilchen and Der Gott des Gemetzels were awarded the Nestroy Theater Prize for the best German-language performance . In 2001 the theater was nominated for a Nestroy.