This article is ambiguous. For the former Schiller Theater on Alexanderplatz in Berlin, see Königsstädtisches Theater . 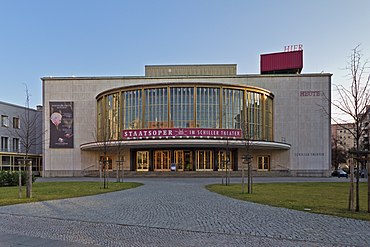 The Schiller Theater (now the Schiller Theater ) is a Berlin theater building and has long been a playhouse . It is located in the district of Charlottenburg in the Charlottenburg-Wilmersdorf district near Ernst-Reuter-Platz in Bismarckstrasse  110 (formerly no. 117-120). During the 1920s and 1930s it served the Prussian State Theater Berlin , and from 1951 to 1993 the State Drama Theaters Berlin . In 1993 the State Drama Theaters were closed by a decision of the Berlin Senate due to the poor financial situation of the city after a long struggle for preservation.

The building is temporarily rented out as a venue and event location; From autumn 2010 to summer 2017 it served as a replacement venue for the Unter den Linden State Opera .

Since summer 2018, theater and comedy on Kurfürstendamm have been using the building as a temporary venue. 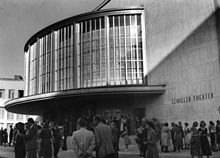 From June 1921 to July 1, 1932, the house was the second venue of the Prussian State Theater Berlin , which had its main venue in the theater on Gendarmenmarkt . In May 1933 it was subordinated to Prime Minister Hermann Göring as the Prussian Theater of Youth within the Prussian State Theaters , but on December 2, 1933, with a ceremony and a performance of Schiller's Wilhelm Tell, it became the property of the City of Berlin.

From 1937 to 1938 Paul Baumgarten's house was extensively rebuilt for the city of Berlin. Baumgarten simplified the facade and the auditorium considerably and thus changed the face of the theater with reference to the New Objectivity of the 1920s, but also in line with the prevailing monumental architectural taste of National Socialism . A “government box” was built in. The sculptors Paul Scheurich and Karl Nocke as well as the painter Albert Birkle were involved in the renovation . From the reopening with Schiller's Kabale und Liebe in 1938, the house was operated as the Schiller Theater of the Reich capital Berlin . The director was the actor Heinrich George under the pseudonym Heinrich Schmitz . According to Berta Drews , his wife, the theater was firebombed in September 1943 , with the stage roof falling into the auditorium. The building was finally destroyed in an air raid on November 23 of the same year.

Between 1950 and 1951 the theater was rebuilt for the city of Berlin according to plans by Heinz Völker and Rolf Grosse . Some parts of the ruins of the old theater were reused for the new building. The ground glass wall of the main foyer (25 m × 5.20 m) was created by the painter Ludwig Peter Kowalski , the relief wall of the entrance (hard stucco, length 28 m) was made by the sculptor Bernhard Heiliger . At the opening on September 6, 1951, Schiller's Wilhelm Tell was shown. The Schiller Theater was with 1,067 seats as Big House , the main venue of the State Drama Theaters Berlin the next, the Schlossparktheater in Steglitz as a small house used. Other venues were the Schiller Theater workshop in the Schiller Theater building (today: the subsidiary of the GRIPS Theater ) and the Ballhaus Rixdorf .

In 1993 the Schillertheater was closed by a decision of the Berlin Senate due to the financial hardship of Berlin and all permanently committed employees and artists (including Bernhard Minetti , Erich Schellow and Sabine Sinjen ) were dismissed. The last performance of the state theaters there was the premiere of the play Weißalles und Dickedumm by Coline Serreau with Katharina Thalbach .

The closure of the largest German speaking theater sparked protests and bitterness and earned Ulrich Roloff-Momin, then Senator for Culture, the reputation of "Schiller killer". After that it was used as a musical and guest theater. From January to October 2000, the Maxim-Gorki-Theater used the stage of the Schiller Theater .

Replacement venue for the State Opera

After the performance in the Berlin State Opera Unter den Linden ended on May 31, 2010, the ensemble and the State Orchestra were housed in the Schiller Theater for the duration of the renovation work until 2017. The first opera premiere in the temporary venue took place on October 3, 2010.

After seven years of renovation, the State Opera ended its time at the Schiller Theater at the end of the 2016/17 season.

Replacement venue for theater and comedy on Kurfürstendamm

Since summer 2018, theater and comedy on Kurfürstendamm have been using the Schillertheater as a transitional venue for the renovation work on the Ku'damm-Karree high-rise, which is expected to take three years . The transitional venue is called "Komödie am Kurfürstendamm im Schillertheater" and was opened on September 23, 2018 with the premiere of Willkommen bei den Hartmanns .

Selection of actors who appeared in leading roles at the Schillertheater: