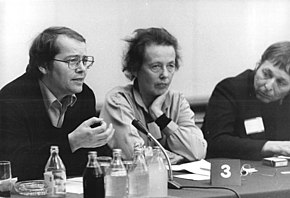 Volker Braun (born May 7, 1939 in Dresden ) is a German writer . Along with Peter Hacks and Heiner Müller, he was one of the most important playwrights in the GDR . In addition to theater texts, his work includes poems, novels, short stories and radio plays.

Volker Braun grew up alongside four other brothers as the son of the auditor , representative and art lover Erich Braun and his wife Irmgard in Dresden- Rochwitz . In 1957 he graduated from high school and initially worked for a year in the Dresden print shop of the Sächsische Zeitung. After he had initially unsuccessfully applied to study, he went to the Black Pump gas combine , where he a. a. worked as civil engineering worker and concrete pipelayer. The experiences of this time were reflected in his early literary works, including his debut drama Kipper Paul Bauch (later published under the title Die Kipper ). In 1960 he began studying philosophy at the University of Leipzig . During this time the first literary works were created. Braun was first known primarily as a poet. Since 1960 he was a member of the SED . Nonetheless, he was considered critical of the state in the GDR and often only succeeded in publishing his prose or poems with the use of tactical skills. From the start he saw himself as a decidedly political author in the critical successor to Bertolt Brecht . The focal point of his work were the contradictions between the socialist utopia on the one hand and the reality of state socialism on the other. Like Brecht and Heiner Müller , he understood them as part of a contradiction in epochs, the effects of which he did not simplify ideologically, but described as the “open ends of history”. The title The simple truth is not enough , which a volume of notation published in 1975 bears, is programmatic for Braun's attitude. The turn to historical material as the basis of his dramatic production, which he carried out in the 1970s, testifies to the intention to repeatedly place the contradictions of the GDR in a larger historical context.

At first he described the construction of socialism with a critical and enthusiastic attitude. From 1965 to 1967 he worked as a dramaturge at the Berliner Ensemble at the invitation of Helene Weigel . After the events of the Prague Spring , he became increasingly critical of life under socialism and the possibilities of reform. He was then increasingly monitored by the Stasi. Braun worked at the Deutsches Theater Berlin since 1972, and in 1976 he was one of the signatories of the protest resolution against Biermann's expatriation . From 1979 he returned to the Berliner Ensemble, and in 1981 he received the Lessing Prize of the GDR .

In the eighties, Braun's works increasingly portrayed a depressing life in the GDR. The actors in his pieces move resignedly in an immobile environment. His Hinze Kunze novel , based on Diderot's Jacques the Fatalist and his Lord , received permission to print in 1985, but after its publication it was sharply attacked by the influential critic Anneliese Löffler as "absurd" and "anarchist", and Klaus Höpcke , then deputy Minister of Culture, received disciplinary action for giving permission to print.

On the other hand, Braun received the GDR National Prize in 1988 . During the peaceful revolution in 1989 he was one of the advocates of an independent “third way” for the GDR and was one of the first invited to sign the appeal “ For our country ”. After reunification, he dealt critically with the reasons for the failure of the GDR. In this context there is also his collaboration with the western-Marxist magazine " Das Argument " published by Wolfgang Fritz Haug .

Volker Braun received many awards both in the East and in the West. Even before reunification, he had the status of an all-German author. In 2000 he received the renowned Georg Büchner Prize .

From 2006 to 2010, Volker Braun headed the literature section at the Academy of Arts (Berlin) . He is a member of the PEN Center Germany .

For the position during and after the turn

A famous poem from 1990 describes her:

The property
Here I am: my land goes to the west.
WAR THE HUTS PEACE THE PALACES.
I gave him the kick myself.
It throws itself away and its skinny goat.
The winter follows the summer of desire.
And I can stay where the pepper grows.
And all of my text becomes incomprehensible.
What I never owned is torn from me.
What I did not live, I will miss forever.
Hope was in the way like a trap.
My property, now you have it on your claw.
When do I say mine and mine all again.

These verses “get to the point: the contradiction between design and life, possibility and reality, theory and practice, program and experience in the GDR socialism, which in the end is difficult to live with ... Each verse in the poem is a short, complete sentence with a period at the end . Each sentence is a laconic statement of sad finality. [...] The hope that was a trap on the way to the lack of illusions must now give way. A great elegy. "

Braun sometimes had the habit of crossing out the name printed in the book when signing his books and then putting his name over it. Lately he has only signed his books in pencil, writing the signature date vertically from top to bottom.