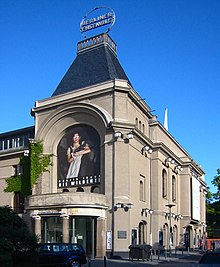 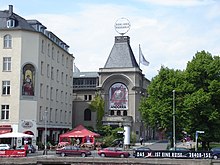 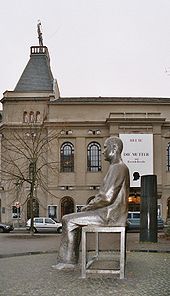 The Berliner Ensemble (abbreviated: BE) is one of the most famous theaters in the German capital. It became famous for performances of the works of its founder Bertolt Brecht and is considered one of the leading German-speaking theaters. The Theater am Schiffbauerdamm in Friedrich-Wilhelm-Stadt in the Mitte district ( Mitte district ) has been the venue for the Berliner Ensemble since 1954 .

The founding of the Berliner Ensemble in November 1949 a few weeks after the founding of the GDR is directly related to Brecht's search for a new job in Germany for himself and his wife Helene Weigel and in the efforts of politicians and cultural authorities and personalities in the Soviet Union Zone of occupation and later GDR to see the development of an internationally recognized cultural scene in the capital. After bitter experiences in the USA (October 30, 1947: interrogation before the Committee for Un-American Activities ) and strict personal surveillance in Switzerland , Brecht implemented his decision to settle in eastern Germany and Berlin. There he was received with open arms. His and Helene Weigel's plan to found an ensemble was supported by Wilhelm Pieck and Otto Grotewohl . It was the Politburo of the SED that decided to found the theater with an annual budget of 1.5 million marks. The venue should be on Schiffbauerdamm. However, this place was already occupied by Fritz Wisten's ensemble and was only vacated in 1954 when he was able to move to the Volksbühne, which was destroyed in the war and now restored .

The ensemble essentially consisted of the actors and employees who participated in the first public presentation of the ensemble on January 11, 1949 with the play by Bertolt Brecht Mother Courage . This performance took place at the "Deutsches Theater" in Berlin. From March 19, 1954, the ensemble played in its own house, the Theater am Schiffbauerdamm .

Following an idea from Brecht in 1953, various "brigades" were founded in 1959 to promote theater work in the BE artistically and socially, including the "Brigade for Theater Theory", the "Brigade Studio" and the "Brigade Work with the Audience" . The work of the ensemble was largely shaped by Bertolt Brecht, who, as a director and writer, made the house “his” theater. Picasso's dove of peace was the symbol of the Berliner Ensemble . She was pictured on the stage curtain. Due to its excellent reputation, the ensemble has often been invited to guest performances at home and abroad, for example in France, England, Austria, Sweden and Italy. In the middle of the preparations for a tour to London, Brecht died. His understanding of epic theater and collective work was continued by his widow Helene Weigel , who was the artistic director of the Berliner Ensemble from its foundation until her death in 1971 . Assistant directors such as Manfred Wekwerth , Peter Palitzsch , Isot Kilian , Benno Besson and Joachim Tenschert had learned from Brecht and are now continuing his work with the actors. After Helene Weigel, Ruth Berghaus followed as artistic director, whose husband, the composer Paul Dessau , had written the music for Mother Courage . Her attempt to bring experimental theater to the stage aroused resistance in the ensemble and in the audience, which ultimately led her to resign.

In 1977 Berghaus was replaced by Manfred Wekwerth , who managed the house until 1991. Organizationally, the following years were less successful. A controversial "joint directorship" Matthias Langhoff , Fritz Marquardt , Peter Palitzsch , Peter Zadek , Heiner Müller from 1992 to 1993 was followed by Marquardt, Palitzsch, Zadek, Müller from 1993 to 1994 and Marquardt, Palitzsch, Müller from 1994 to 1995, Müller 1995 , Martin Wuttke 1996 and Stephan Suschke from 1997 to 1999. With the performance of the play "The Brecht Files" about Brecht's observation by the FBI , the house was reopened on January 8, 2000 after renovation work under the director Claus Peymann , who was there until 2017 was director and partner. Since the 2017/18 season, Oliver Reese has been the new director of the Berliner Ensemble, who runs the house with a management team to which u. a. Michael Thalheimer as in-house director. For the opening of Reese's first season, Antú Romero Nunes staged "Caligula" by Albert Camus, the premiere was on September 21, 2017.

Many well-known and productive artists worked in the vicinity of the Berliner Ensemble. The photographer Ruth Berlau photographed stage scenes that were published as model books. The set designer Karl von Appen was for many years a synonym for sophisticated stage sets and theater posters. The brothers John Heartfield and Wieland Herzfelde and Karl-Heinz Drescher were also known for this.

The use of the word Berliner Ensemble has taken a turn. While in the past decades this meant the theater ensemble as a community of actors and employees, the BE is also repeatedly equated with the theater building. The theater in which the Berliner Ensemble plays is the Theater am Schiffbauerdamm . The building is owned by the Ilse Holzapfel Foundation, which was founded by Rolf Hochhuth . The foundation rents the building to the State of Berlin. Today the theater ensemble is run as a corporation in the legal form of a GmbH , partner is Oliver Reese. He has the right to use the property (quasi as a subtenant of the land ).

The years of use of a provisional second stage should have a happy ending. An outbuilding of the theater on Schiffbauerdamm will be converted by autumn 2019. This would give the theater a second, fully equipped venue for the first time.

Well-known former actors in the ensemble