Ernst Heinrich Barlach (born January 2, 1870 in Wedel , † October 24, 1938 in Rostock ) was a German sculptor , writer and draftsman . Barlach is particularly known for its wooden sculptures and bronzes . He also left behind a diverse range of prints , drawings and literary works. His artistic handwriting, both in visual and literary work, is somewhere between realism and expressionism . His works are researched, supervised and exhibited internationally by the Ernst Barlach Society in Hamburg, which was founded in 1946 .

Ernst Barlach was the eldest of four sons of the doctor Georg (Gottlieb) Barlach (1839–1884) and his wife Johanna Louise, née. Vollert (1845-1920). He spent a large part of his childhood in Schönberg (Mecklenburg) , where his father practiced from 1872, and from autumn 1876 in Ratzeburg . About his move from Schönberg to Ratzeburg, Barlach reports in his autobiographical work Ein Selbststahles Leben , published in 1928 : “... and when later my ... father said to me: 'We are moving to Ratzeburg soon', I asked carefully: 'Is that where the beautiful water was?' - That was it. ”The same work shows that the family in Ratzeburg first moved into a house on Seestrasse, but after a short time they moved into“ the old house with the high roof ”, which Barlach later always called his“ old father's house “And in which the Ratzeburg Barlach Museum is located today . After the death of his father, Barlach returns to Schönberg as a half-orphan with the family, where he attended secondary school.

Barlach's talent for linguistic and visual design was encouraged from early childhood. 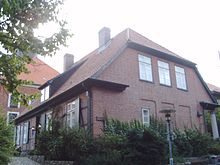 Memorial plaque on the Barlach house in Friedrichroda

After studying art at the Hamburg School of Applied Arts from 1888 to 1891, he studied at the Dresden Art Academy until 1895 as a master student of the sculptor Robert Diez . His thesis there was The Cabbage Picker . This was followed by a two-year stay in Paris , where he was mainly occupied with writing. Between 1894 and 1897 he spent some time in Friedrichroda , where he had accommodation at Alexandrinenstrasse 26.

From 1897 Barlach initially worked as a freelance artist. In 1901 he moved back to his hometown Wedel and began his first dramatic attempts. He also mainly created small ceramics for the Mutz pottery workshop in Altona. In 1904 he worked for half a year through the mediation of Peter Behrens as a teacher at the technical college for ceramics in Höhr-Grenzhausen ( Westerwald ).

In 1906 Barlach made a trip to Russia ; the impressions of Russian peasantry and folk art were to influence his sculptures in the way they were designed. In the same year he became the father of a son, Nikolaus (Klaus), from the short relationship with the seamstress Rosa Schwab, who had also been his model . After a two-year legal battle, he was given custody as a father. In 1907, in the spring salon of the Berlin Secession , Barlach exhibited the colored terracottas sculpted by Richard Mutz, Russian beggar with bowl and blind Russian beggar . From 1909 Barlach received a scholarship at the Villa Romana in Florence .

Barlach workshop on Inselsee in Güstrow, 1980

Barlach's early works already dealt with people, their living conditions and their attitudes towards life. From 1910 he regularly took part in exhibitions at the Berlin Secession, the Sonderbund and at the art collector Paul Cassirer in Berlin. Since that year Barlach lived together with his mother Louise († 1920) and his son Klaus in Güstrow ( Mecklenburg ), where he had a studio and house built by Adolf Kegebein on the Inselsee according to his needs . This is where his main works were created. In 1914 he met Friedrich Schult for the first time in Güstrow, who later became a lifelong friendship. In the conversations Barlach made the appropriate statement: "Every art needs two: one who makes it and one who needs it." After being called up in 1915 for the Landsturm , he was particularly concerned with the experience of "war". In 1925 he became an honorary member of the Academy of Fine Arts in Munich .

After the couple Bernhard A. Böhmer (art dealer) and his wife Marga (sculptor), who were friends with Barlach, separated in 1927, Marga Böhmer became his partner until his death and then his estate administrator.

In 1922 the first memorial to the Mother of Sorrows was inaugurated in Kiel . The memorial for the fallen, Der Schwebende , in Güstrow Cathedral was created in 1927. In Der Schwebende , Barlach is said to have processed the facial features of his artist colleague Käthe Kollwitz . Just one year later, the spirit warrior was set up in front of the Kiel University Church . The memorial in Magdeburg Cathedral followed in 1929, and the Hamburg memorial in 1931 .

Barlach was one of the 37 signatories of the call by cultural workers of August 19, 1934, in which he confessed to "trust and loyalty to him (Adolf Hitler)."

The draft of a Pietà for Stralsund was no longer completed in 1932 due to hostility from National Socialist circles. The character assassination campaign sparked against Barlach led to the storage of the Magdeburg Memorial in 1934 , and in 1937 to the removal of the Kieler Geistkämpfers and the Güstrow Memorial, which was melted down in 1941. Friends had made a second casting, which was hidden at Hugo Körtzinger's in Schnega until the end of the war . In 1938 the relief Mourning Mother and Child was removed from the Hamburg Memorial and the forced exit from the Prussian Academy of the Arts . More than 400 of his works were removed from public collections as " degenerate art ". In 1937 the Reich Chamber of Fine Arts banned him from exhibiting.

At the age of 68, Barlach died of a heart attack on October 24, 1938 in the St. Georg Clinic in Rostock. He was buried in the grave of the Barlach family in the "Vorstadtfriedhof" in Ratzeburg. The sculpture "The singing monastery student" (1931) is located on the grave site.

Ernst Barlach was the grandfather of the entrepreneur and gallery owner Hans Barlach .

In 1966, DEFA produced the feature film Der verlorene Engel, dedicated to Ernst Barlach, based on the novella Das schlimme Jahr by Franz Fühmann, directed by Ralf Kirstens . After postponement and censorship cuts, it was only performed in the GDR in 1971.

Barlach's critics include the Leipzig professor of art history Kurt Magritz , who accused his work of nihilistic and formalistic tendencies in the early 1950s .

The Ernst Barlach Foundation in Güstrow preserves and maintains essential parts of the Barlach estate and makes them accessible to the public through museum presentations.

In 1953 - after it was quiet around him until the end of the war - the Güstrow Gertrudenkapelle was opened as the first Barlach Museum. This was followed by memorials / staff museums in Ratzeburg , Hamburg, Güstrow again (Atelier in Heidberg) and the Ernst Barlach Museum in the birthplace in Wedel / Holstein .

Some of his works were shown posthumously at documenta 1 (1955) and documenta III (1964) in Kassel . The Leopold Museum in Vienna showed a retrospective of his work in 2009.

On September 19, 2012, “the largest Barlach exhibition in a long time” opened in Münster with almost 500 exhibits, prepared by the Evangelical Church District of Münster in cooperation with the Ernst Barlach Society.

Works in the visual arts (selection)

With the initial issue date January 2, 2020 was the German Post AG to mark the 150th birthday of Ernst Barlach a special stamp in the denomination out of 270 euro cents. The design comes from the graphic artist Thomas Mayfried from Munich.