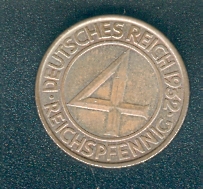 In the economy, goods that are money or have a face value in monetary units are also called nominal goods . This includes the large group of financial products , for which there is usually a nominal value, if there is also another value such as a market value , market value or metal value, which can deviate from the nominal value. If nominal goods have two values, laws regulate which of the values is to be used for their evaluation . Since the abandonment of metallism, coins have been detached from their metal value , so that money as a whole can only fulfill its purpose as a unit of account with the help of a face value. The face value thus represents an important money function, without it money is worthless. However, the face value of a coin does not always have to be imprinted. For example, the thalers of the Reichsmünzordnung were mostly minted without an imprinted face value (see e.g. minting according to the Reichsmünzfuß etc.).

The province of Westphalia’s 1 billion mark piece is the coin with the highest face value of all time that a German coin has ever had.

According to Section 14 (1) of the BBankG, banknotes denominated in euros are the only unrestricted legal tender for which there is a full acceptance requirement . Coins, on the other hand, are subject to limited acceptance. The face value on both indicates the legally prescribed monetary value of a means of payment . The owner at the nominal value of the cash has a claim on the issuer Central Bank , the emitted notes corresponding to the nominal value passivated . There is no second value other than the nominal value, so that there is no valuation problem with legal tender.

The higher the share capital, the more shares can be issued with the same nominal value.

If the nominal amount is higher (lower) than the acquisition costs when valuing assets , the difference is to be included in the accruals and deferrals on the liabilities side ( assets side ) (§ § 340e , § 341c HGB). In the annual report , capital investment companies in accordance with Section 101 (1) No. 1 KAGB must list their assets belonging to the investment fund according to type, nominal amount or number, price and market value.

Legal tender has only a nominal value at which it must be taken in payment . If - as with money - the nominal value is the only value, then the added nominal values ​​result in the total amount of cash as in the case of cash on hand . Also book money , assets and liabilities are to be reported at face value, unless it is doubtful receivables . In the case of a zero-coupon bond in the classic sense, the final payment is called the face value. Foreign currencies and sorts - legal tender in the currency area of their country of origin -, on the other hand, have a market value as a foreign currency in addition to a face value. Nominal goods that have a current value (market value, market price , market value or metal value) in addition to their nominal value cannot simply be valued on the basis of their nominal value. This only applies to cases in which the debtor, issuer or issuer of these nominal goods has undertaken in writing to redeem them at their nominal value on the due date at the latest ( check , bill of exchange ). If this obligation does not exist, the respective price, market or metal value must be used as a basis for the valuation. This results from multiplication with the nominal value:

For example, if the price of a government bond (with a nominal value of EUR 1000) is 91%, its price is EUR 910. In the case of bonds, their par value convergence must be taken into account.

Nominalism and the principle of nominal value