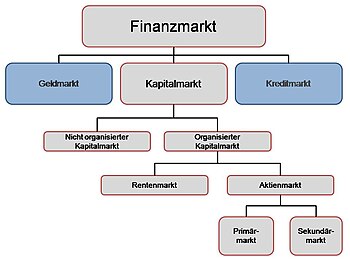 Demand for money arises from the need to bridge the time gaps between income and expenditure . There is therefore a demand for money when payments are due for the purchase of goods and services (for consumption or investments ), for investments or for the repayment of debts ( transaction fund ). If there is uncertainty about the amount of the transaction requirement, there is a demand for money to protect against illiquidity ( precautionary fund ). Money for hoarding purposes because of price and interest rate expectations (speculative fund) also creates demand for money. If the nominal gross domestic product plus trade in used goods (transaction volume) increases in the national economy at a constant velocity of circulation of money, the demand for money increases proportionally. It falls when the interest rate rises .

The control of money market rates is one of the most important monetary policy activities of central banks . The European Central Bank (ECB) controls money market rates via the main refinancing rate , the marginal lending rate and the deposit rate , which means that the money market rate usually always moves between the last two rates mentioned, which together form the interest rate corridor .

In addition to the quantitative method of discount policy , the US Federal Reserve (FED) controls money market rates using a target range for the federal funds rate . The Swiss National Bank is pursuing a similar strategy. Their quantitative control takes place via the above. Buyback agreements, direct control of the interest rate using a target range for the three-month Libor .

This so-called LM function leads neither to inflation nor to deflation in the goods market . If money demand and money supply do not match, there is either a money gap

or vice versa, there is a surplus of money . Money gap or money overhang produce inflationary or deflationary effects and are therefore eliminated by the central banks as part of monetary policy by controlling the money supply.

Money markets work like any other market . A distinction must be made between the allocation, information, evaluation and coordination functions:

A risk transformation takes place on money markets when financial intermediaries between market participants come with different risk and the default risk change.

How the money market works

The money market is of central importance for balancing liquidity between commercial banks and for refinancing them . The most important element is the business relationship between commercial banks and the central bank. Basically, commercial banks have different methods of meeting their short-term liquidity needs. In addition to raising central bank money via main refinancing transactions (in the euro zone via the so-called main refinancing instrument , in Switzerland via repurchase agreements with the Swiss National Bank ), various central banks offer other short-term refinancing instruments; in the euro zone this is the marginal lending facility ; in the United States it is discount deals with the Federal Reserve Banks .

All market participants are exposed to a default risk, which consists in the fact that the business partner (counterparty) can no longer fulfill his contractual obligation ( Herstatt risk ). This settlement risk is monitored through the granting of mutual credit lines . The market participants are therefore only willing to make money available to someone else up to a specified maximum amount. It must be taken into account that the transactions in interbank trading are usually carried out without credit protection ( blank credit ). In addition, there is an interest rate risk from money market activities , but this is comparatively low due to the short deadlines. The money market is an important instrument for controlling the liquidity risk , whereby money market activities can also give rise to independent liquidity risks.