The capital market is the sub-market of the financial market where the medium and long-term capital requirement meets the capital supply. Short-term transactions take place in the money market .

The compound “capital market” is made up of the homonym “capital” and market . Under capital is not the factor of production to understand, but in this market as commercial properties medium serving or long-term financing instruments . Market participants are all economic entities ( private households , companies , the state and its subdivisions (such as public administration and state-owned companies or municipal companies ). They act as capital providers ( investors ), financial intermediaries ( credit institutions , insurance companies , investment funds ) or borrowers . Commercial objects are specifically medium or Long-term loans ( investment loans , municipal loans ), loans ( mortgage loans , real estate financing ) or mezzanine capital ( credit market ), bonds of all types ( bond market ), stocks and participation certificates or profit participation certificates ( stock market ). The price on the capital market is generally the capital market interest rate , which however because of the diversity of financial products no single interest rate is. As market interest the act on bonds issue yield ( primary market ) or the current yield ( secondary market ) in shares, the dividend yield in loans from the loan rate . De The stock exchanges are the only organized capital market . 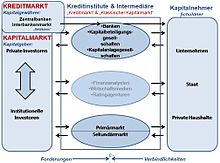 The task of intermediaries is to facilitate the balance between the supply and demand of capital by carrying out transactions in the payment flows of the buyers and providers of capital, improving the level of information and supporting transaction processing.

A distinction must be made between the allocation, information and evaluation functions:

The quantity transformation comprises the accumulation of the savings formed in an economy and their distribution to the investors in the desired maturity and quantity.

The maturity transformation enables the balancing of the deadlines between investors and investors. This is the period during which a loan is drawn by an investor and the period that elapses before a saver makes his financial resources available. These deadlines usually differ from one another.

The batch sizes transformation enabled by a merge of multiple lenders a match, the requested by the borrower amounts which could not provide a single investor.

A risk transformation takes place in the capital markets when financial intermediaries between market participants come with different risk and the default risk change. Risk transformation gives savers the option of hedging or spreading their credit risk . In this way, insecure payment flows can be converted into secure payment flows. For example, risks can be converted by fluctuating exchange rates.

Development of the capital markets

Marcus Tullius Cicero reported in 66 BC that a financial crisis in the province of Asia also infected Rome because of its interdependencies: “This credit system and these financial transactions, which are carried out in Rome at the forum , are closely intertwined with those funds in Asia".

In the late Middle Ages , between the second half of the 14th century and the end of the 15th century, the prevailing precious metal shortage and the resulting monetary contraction led to a liquidity crisis . European production of precious metals dried up, the mints reduced their production or even stopped it completely. The supply of money became scarce because the credit supply was also based on the precious metal stocks. The reason was not only the lower supply of precious metals, but also the hoarding of coins. Between 1331–1340 and 1491–1500, the decline in European coin production was estimated at 80%.

Institutionally, capital markets began with the establishment of stock exchanges. The Antwerp Stock Exchange started regular trading in bonds in 1532, including Dutch court letters ( government bonds ), private bonds of the Dutch state officials and magnates (for the account of the government), bonds of the Dutch provincial estates, city bonds, rentier letters and bonds of the English crown and the King of Portugal. The first stock exchange came into being with the Amsterdam Stock Exchange ( Dutch Amsterdam beurs ) in 1612. It is considered to be the first stock exchange that enabled permanent stock trading in the 17th century. This was followed by stock exchanges in Königsberg (1613), Lübeck (1614), Frankfurt am Main (1615) and Leipzig (1635), which initially only traded in bills of exchange and sorts .

One of the first capital market crises was the founder crash , which first led to major price losses on the Vienna Stock Exchange on May 5, 1873 , where the price falls on May 9, 1873 ( Black Friday ) reached their preliminary climax. The crisis was carried over to the German Reich as the Great Depression , primarily through the contagion effect .

The economist Rudolph Eberstadt obtained his material for his monograph from 1901 on the German capital market mainly through direct inquiries from the city administrations. He pointed out here that the “permanent weakness of the German capital market, the inability to raise the necessary capital for productive purposes, may be due to the claims of land debt [mortgage loan, i. Ed.]… Be adequately explained ”. Eberstadt's reference was made at a time when the capital markets were underdeveloped and even less explored.

Harry Markowitz developed the classical capital market theory in 1952. James Tobin applied the Markowitz model in 1958 when developing his money demand theory . He expanded the classic theory to include the possibility of a risk-free capital investment. In 1964, William F. Sharpe defined the risk of an investment solely as its statistical volatility , i.e. the extent of fluctuations in stock exchange prices. In 1965, Jack Treynor contributed to the further understanding of the Capital Asset Pricing Model (CAPM) with the key figure named after him, the Treynor quotient . In 1966, Jan Mossin completed the CAPM that was created, which is considered the most important pricing model on the capital market.

Eugene Fama developed the concept of market efficiency in 1970 . Accordingly, a market is efficient when its market prices reflect all available information. Robert C. Merton expanded the CAPM in 1973 by working on the Black-Scholes model for the valuation of financial options. By Stephen Ross developed in 1976 arbitrage pricing theory demands, unlike the CAPM no market equilibrium, but merely an arbitrage-free securities market.

The neoclassical capital market theory is based on the by John von Neumann and Oskar Morgenstern developed in 1944 expected utility theory to the expectation maximize their risk utility function when acting rationally actors. It forms the basis of rational action when making decisions under risk . She postulates that if the preference of a decisive actor with regard to risky alternative courses of action fulfills the axioms of completeness, continuity and independence, a utility function exists whose expected utility reflects the preference.

Both the classics and the neoclassical capital market theory initially assume the ideal-typical state of perfect capital markets. In reality, however, there is a capital market imperfection due to transaction costs , information asymmetries , limited rational behavior, liquidation costs and non- risk-diversified portfolios .

Capital markets are differentiated on the basis of the degree of organization and the division into primary or secondary markets.

The free capital market and interbank trading , on the other hand, have a very low level of organization with only a few market regulations . There mainly transactions take place without the involvement of banks, stock exchanges and insurance companies, which are mostly insecure and unmanageable. The least organized market in Germany is known as the gray capital market , where, for example, the focus is on trading shares in real estate funds .

Both in economics and in business administration , attempts are made to depict the above-mentioned characteristic features using models. In particular, the theoretical constructions of the perfect and imperfect capital market are used.

It is characteristic of this simplified theoretical model of the perfect capital market that the objects of trade on the market are homogeneous and there is complete market transparency . The possibilities for raising and investing capital are unlimited. The participants of the market can react quickly to changes in volume and price, as there are no time delays ( English time lags ) are. In the perfect capital market, there is no distinction between equity and debt , which means that there is only one uniform and constant market interest rate . These assumptions are gradually adapted to reality.

A complete capital market is used when the entire state space can be mapped through linear combinations of the traded payment flows ( securities ) .