Exchanges differ in the objects traded on them. While at stock exchanges as trading objects securities are, are at commodity exchanges trade standardized objects raw materials and natural products such as oil , grain , metals , electric current or cotton ( commodities ). The stock exchanges know as types of business the cash business or the futures business (also futures contracts ), which enable both stock exchange business with a commercial background and speculative business .

The first exchanges emerged as commodity exchanges. The first is the Lucca commodity exchange , which has brought money changers and spice dealers together in the courtyard of the cathedral since 1111. The stock exchange, which took place in Bruges from 1409 in front of the house of the founding family van der Beurse, brokered absent goods and bills of exchange . Because bills of exchange were also traded here as a type of security, it is considered the world's first stock exchange. 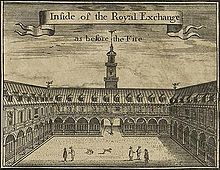 The original Royal Exchange just before the Great Fire of 1666

The Royal Exchange , which opened in London on January 23, 1571 and whose building fell victim to the great fire of September 1666, is the first exclusive stock exchange in today's sense . The Hamburg stock exchange , which had previously opened in 1558, was a mixed stock exchange where all kinds of wholesale transactions, money and exchange transactions, insurance and freight transactions, as well as transactions in securities were concluded. This was followed in 1611 initially as a commodity exchange ( Dutch goederenbeurs founded) and 1612 as a securities exchange ( Dutch effectenbeurs ) opened Amsterdam Stock Exchange after the established in March 1602 Dutch East India Company to their high capital needs funded by sale of shares in public. In 1747 her "fund coursemark" showed a total of 35 bonds and 6 stocks.

On September 9, 1585, the Frankfurt Stock Exchange opened primarily as an exchange stock exchange, in 1797 a printed securities slip appeared here for the first time; the first share listed here in 1820 was the share of the Oesterreichische Nationalbank. The first commercial Paris stock exchange existed in 1639 when the functions of the commodity and stock exchange were separated. A decree of April 2, 1639 gave the dealers the designation stock traders ( French agents de change ), whose official trade was given the designation "parquet" ( French parquet ). Since then, every trading floor has been referred to as floor and trading therein as floor trading . The Zurich Sensalenordnung of May 13, 1663 regulated the organization of the stockbrokers (" Sensalen "). In 1698 the London stock dealers had to leave the Royal Exchange because of their rowdy behavior and initially closed their shops in "Jonathan's Coffee House" until 1773 they were able to move into the new London Stock Exchange building . The Vienna Stock Exchange was founded on August 1, 1771 by patent from Maria Theresia . At first only bonds, bills of exchange and foreign exchange were traded. In 1818, the Oesterreichische Nationalbank was the first public limited company to be listed on the Vienna Stock Exchange.

The American New York Stock Exchange (NYSE) was established on May 17, 1792 through an agreement (“Buttonwood Agreement”) between 24 brokers , the first share traded on the NYSE was that of the Bank of New York . In the early days , trading in government bonds became less important, and from 1870 onwards, share trading increased significantly worldwide. With the construction of the railway , the steel industry and mechanical engineering also flourished, resulting in the establishment of capital-intensive joint-stock companies . The Berlin Stock Exchange , which had existed since June 1685, did not start trading in securities until 1820. While the price list of the Berlin Stock Exchange had only listed six railroad papers in 1842, there were 29 issues in 1844 and 50 in 1846 . A first stock exchange law from June 1896 standardized the organization of the then 29 German stock exchanges. In Switzerland meanwhile in 1884 the "Law on the Trades of Securities Selling and Stock Exchange Agents" placed all stock exchanges (in particular Geneva, founded in 1850; Zurich, ring trade since 1873; Basel, 1876) under state supervision .

In January 1935, during the Nazi era, a law merged the then existing 21 German stock exchanges into nine stock exchanges, twelve had to close. After the Second World War, the Hamburg stock exchange was the first to open on July 9, 1945, followed by Munich in August 1945 and Düsseldorf in April 1946. From 1971 onwards, the electronicization of the stock exchanges increasingly replaced floor trading because the computer systems were used in every phase of the trading process. The first level of automation was called computer-aided floor trading , in which individual transaction phases were electronically supported. In February 1971, NASDAQ introduced a screen-based trading system that made it the first electronic exchange. This was followed by computerized trading , then came computer trading systems used and finally followed by the computer market , which does not need any floor trading.

The German legislator only recognized the electronic conclusion of contracts in July 1989. These regulations were made in the Stock Exchange Act and made electronic stock exchange trading possible. In July 1988, the Frankfurt Stock Exchange introduced the DAX , and in October 1998 the introduction of " Xetra Release 3" enabled the electronic trading of around 2000 shares , 370 bonds and 28 stock option certificates at the expense of floor trading. He forwarded the securities orders of the credit institutions directly to the stock exchange and thus to the order book of the lead broker . In Switzerland, ring trading was discontinued in August 1996 after electronic trading in foreign stocks was introduced on December 8, 1995, electronic trading in Swiss stocks and options began on August 2, 1996, and bonds began on August 16, 1996.

The Fourth Financial Market Promotion Act of July 2002 set the course for electronic price formation, which tended to increase the importance of electronic trading systems. After the Frankfurt Stock Exchange already traded and settled 93% of all securities electronically, floor trading was finally stopped in May 2011.

In the case of securities exchanges, a distinction must be made between the market formation function, financing function and circulation function. The market formation function organizes and institutionalizes securities trading; its essential feature is the high degree of organization of the exchange. The finance function provides on the primary market that the capital needs of issuers is covered and also on the secondary market at a balance of supply and demand comes. The circulation function creates market liquidity , enables price formation and contributes to informing market participants about market data and thus to market transparency . The fact that even small securities orders can be traded at any time also leads to lot sizes , deadlines and risks being transformed on the securities exchanges.

Stock exchanges are not primarily used to issue securities, but rather act as a circulation market, which enables investors to acquire securities with little effort and at the lowest possible cost and to sell them again. In modern financial market theory , securities exchanges are viewed as an independent institution, as a service company , whose function consists in meeting contractual partners ( counterparties ).