The title of this article is ambiguous. Further meanings are listed under Dax .

The DAX (abbreviation for D eutscher A ktieninde x ) is the most important German share index . It measures the performance of the 30 largest and most (based on the free float - market capitalization ) liquidate most representative companies in the German stock market and represents around 80 percent of the market capitalization of listed companies in Germany. The index is a product and registered word mark and figurative mark of Deutsche Börse AG , whose shares are themselves included in the DAX. It is the most important member of the DAX index family .

The stock corporations included in the DAX are listed in the Prime Standard on the Frankfurt Stock Exchange . The index is based on trading data in the Xetra electronic trading system and is calculated every trading day from around 9 a.m. to 5:30 p.m.

The DAX was developed jointly by the Working Group of German Stock Exchanges , the Frankfurt Stock Exchange and the Börsen-Zeitung . It was introduced on July 1, 1988 and continues the Börsen-Zeitung index, the history of which goes back to 1959. For December 31, 1987, it was normalized to 1,000 index points. Initially, the DAX was only seen as a supplement to the already established German stock indices, but has since left the other indices behind and is recognized nationally and internationally as the leading index for the German stock market.

In the spring of 1994 the so-called DAX 100 was introduced. This index should document the performance of the 100 most liquid stocks on the stock market . With the introduction of the MDAX in 1996, it comprised the 30 stocks of the DAX and the 70 of the MDAX. By changing the MDAX to 50 stocks, since September 24, 2018 to 60 stocks, the DAX 100 was replaced by the HDAX . The CDAX , on the other hand, includes all shares traded in Frankfurt. The SDAX since 24 September 2018 includes 70 smaller values behind the MDAX.

The so-called strategy index includes: a. the ShortDAX . It is inversely proportional to the daily development of the DAX and thus enables investors who can only take long positions to participate in negative price developments. For example, if the DAX loses 5% on one day, the ShortDAX will increase by the same percentage. This z. For example, index providers have the option of offering a product that rises when the DAX performs negatively and opens up opportunities for the “buyer” to generate profits even when the price trend is negative.

The Eurex offers options (ODAX) and Futures (FDAX) on the DAX.

Since June 21, 1999, the index has been based on the prices of the Xetra electronic trading system . Since January 2016, its calculation has started every trading day at 9:06 a.m. CET / CEST . If no opening prices are available for individual shares at this point in time, the respective closing prices of the previous trading day are used. The calculation ends with the prices of the Xetra closing auction , which begins at 5:30 p.m. and can last 5 to 15 minutes. Until December 31, 2005, the DAX was updated every 15 seconds, every second since January 1, 2006.

For the calculation, which is based on the index formula of Étienne Laspeyres , the share prices of the selected listed companies are weighted according to their market capitalization . Only the shares in free float are taken into account. If the capital of a company is divided into several types of shares (e.g. common shares and preference shares ), the type of share with the higher liquidity is used. Special cases are also taken into account, e.g. B. the shares of Deutsche Börse AG traded for exchange in 2011/2012.

Companies in the DAX

For a company to be included in the DAX, it must be listed in the Prime Standard , continuously traded in Xetra and have a free float of at least 10% (until October 2008 this limit was 5%). In addition, the company must have a seat in Germany or have the focus of its trading turnover in shares in Frankfurt and a seat in the EU. Both the legal seat and the operational headquarters, i.e. the seat of the business or administrative management, can be considered the seat of the company.

Among the companies that meet these basic requirements, the further selection is based on the following two characteristics:

The DAX is adjusted according to the following four rules:

All four rules are only applied on the regular adjustment date in September. The fast-exit and fast-entry rules, however, also apply to the extraordinary adjustment dates in March, June and December. Extraordinary updates are also made in the event of a company's bankruptcy or if a company no longer meets the basic requirements mentioned above.

In addition, in exceptional cases, such as takeovers announced at short notice or significant changes in the free float, the Executive Board of Deutsche Börse AG can deviate from these rules in coordination with the Working Group for Equity Indices.

The stocks in the DAX are weighted according to their free float market capitalization . The decisive factor is not the entire stock market value or the entire capital of a company, but only the value of the freely tradable shares ( free float ) of the share class represented in the DAX . Fixed ownership, i.e. the ownership of major shareholders who hold 5% or more of these shares, is not taken into account for the weighting. Fixed ownership also includes own shares held by the issuing company, regardless of the amount of the stake. There has been a cap since 2006: individual titles may have a maximum weight of 10%.

The actual free float market capitalization changes continuously due to changes in share ownership, but above all due to price changes. The weighting is also recalculated with every second recalculation of the DAX based on the current prices. Changes to the free float, on the other hand, are only recorded by Deutsche Börse on the quarterly adjustment dates and are only then included in the weighting. This led to situations in which a share price adapts to a changed free float in real time, but which is only counteracted in the weighting with a delay. In response to the capers of Volkswagen ordinary shares, Deutsche Börse introduced additional rules in November 2008 to counteract such extreme distortions. A value can therefore be removed from the index between adjustment dates if its weighting exceeds 10% and the historical 30-day volatility of the share price exceeds 250%.

1) Daimler and E.ON were represented in the DAX by their predecessor companies since July 1, 1988.

Share prices and market capitalizations after close of trading on August 26, 2020

Based on this initial composition, the following changes were made: 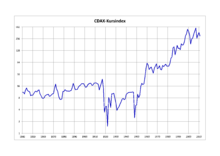 The DAX has been calculated by Deutsche Börse since July 1, 1988 and started at 1163.52 points. The index base is 1000 points as of December 31, 1987. Since investors are not only interested in the current performance of the German share index, but also in the historical one, Frank Mella, then editor of the Börsen-Zeitung and inventor of the DAX , counted back to 1959 on a daily basis.

On June 20, 1985, the DAX closed mathematically at 1007.18 points for the first time above the 1000 point mark. On October 19, 1987, the index posted a daily loss of 9.39 percent. The reason was Black Monday on the New York Stock Exchange , when the value of the Dow Jones Industrial Average plummeted 22.6 percent. On Monday, October 16, 1989, the DAX suffered the biggest daily crash in its history. It collapsed by 12.81 percent. On the previous Friday, the financing of the UAL airline in the USA had failed. On August 19, 1991, the DAX posted a daily loss of 9.40 percent. It was a reaction to the later failed coup against Soviet President Mikhail Gorbachev .

In December 2007, the 30 largest German listed corporations were for the first time in the majority owned by foreign investors. Compared to 2005, their share had risen by 20 to 53 percent.

The weakening of the global economy and the worsening of the euro crisis caused the German benchmark index to collapse again. On September 12, 2011, the DAX ended trading at 5072.33 points. The loss since the peak on May 2, 2011 was 32.6 percent. The announcements of new bond purchase programs by the European Central Bank and the US Federal Reserve , which are basically unlimited, then led to a recovery in prices on the stock market. The monetary stimulus played a bigger role in price formation than the global economic slowdown and the state of companies. In May 2013, the highest levels of July 2007 were exceeded for the first time: On May 22, 2013, the index closed for the first time in its history above 8500 at 8530.89 points, 68.18 percent higher than the last low point on 12. September 2011. After a setback in the summer months, it reached new all-time highs on a closing price basis from September 2013 onwards. On October 29, 2013, the DAX closed for the first time in its history above 9,000 at 9022.04 points. The 9500 point mark was broken two months later, on December 27, 2013, with a closing price of 9589.39 points.

On March 12, 2020 there was the highest loss of points to date with 1277.55 points. The trigger was fear of the economic consequences of the COVID-19 pandemic . With a total price drop of more than 40% within a month, investors experienced the largest drop in the DAX in such a short period of time.

Short squeeze of VW shares in 2008

There were fluctuations of a special kind at the end of October 2008 when Porsche Automobil Holding tried to take over the much larger Volkswagen Group. In October 2008, Porsche owned around 42.6% of the ordinary shares through acquisitions and derivative transactions and was entitled to a further 31.5% through purchase options .

When Porsche announced this four days before the publication of VW's quarterly results, there was a violent short squeeze in the following days . Some market participants (including hedge funds ) had sold the VW shares short and now had to stock up again. After Porsche held around 75% and the state of Lower Saxony held a further 20% of the shares ( VW law ), only just under 6% of the free float remained . Due to this scarce supply and the additionally increased demand from short sellers, the VW share temporarily soared to over € 1,000 by October 28, 2008. This briefly exceeded the total market capitalization of ExxonMobil, the world's largest company at the time .

As a result of this extraordinary price increase, the weighting of the share in the DAX increased from originally 5.88% in September to 27.22% at the close of trading on October 28, 2008. On that day, Dow Jones & Company announced the free float factor of the VW common stock in its indices at the beginning of trading on Friday from 49.63 to 37.32 percent. As of November 3, 2008, Deutsche Börse acted by performing an extraordinary reweighting of the DAX index and thereby capping the weighting of Volkswagen shares in the DAX to ten percent.

The table shows the first time the next 1000-point mark was exceeded on the basis of the closing price of the DAX, which was calculated back to 1959.

The table shows the highest percentage daily profits of the DAX calculated back from 2020 to 1959.

The table shows the highest percentage daily losses of the DAX calculated from 2020 to 1959.

The DAX was calculated back as a performance index (with dividends) until 1981 and as a price index (without dividends) until 1948. The time series is based on a linking of the DAX with the BZ index (1981–1986), the Hardy index (1959–1980) and the share index of the Federal Statistical Office (1948–1958). Earlier data come from Professor Richard Stehle, Institute for Banking, Stock Exchange and Insurance, Humboldt University Berlin . Stehle calculated the return on shares of those companies that would have been included in the DAX performance index if the stock market barometer had existed as early as 1937.

The table shows the annual development of the German stock index DAX, calculated back to 1937.

In July 2018, the television news channel n-tv criticized the fact that the calculation of the DAX compared to other indices, such as B. the FTSE 100 or the S&P 500 , leads to a distortion. He is limited to only 30 companies and thus excludes a large part of the other German stock corporations. The performance index is unrealistic, because it also includes distributed dividends, which leads to a considerable difference compared to the price index.

Companies in the DAX