Leiden ( listen ? / I ) (formerly Leyden , Latin Lugdunum Batavorum ) is a city and municipality in the Dutch province of South Holland . With 124,757 inhabitants (as of January 31, 2019), Leiden is the fourth largest city in the province of South Holland after Rotterdam , The Hague and Zoetermeer . Together with the surrounding communities Leiderdorp , Oegstgeest , Katwijk , Voorschoten and Zoeterwoude, Leiden has more than 254,000 inhabitants. This makes Leiden in South Holland the third largest agglomeration after Rotterdam and The Hague. Leiden has the oldest university in the Netherlands. The city is also known for its old town and the canals . The artist Rembrandt was born in the city.

Leiden is located in the north of the Dutch province of South Holland , about 45 km southwest of Amsterdam and about 18 km northeast of The Hague . The Oude Rijn flows through Leiden . In the inner city area, the Nieuwe Rijn splits off, but in the west of the inner city it merges with the Oude Rijn. The Rijn-Schiekanal and the Zijl also split off in Leiden to the north and south. Clockwise, starting in the north, Leiden borders on Teylingen , Leiderdorp , Zoeterwoude , Leidschendam-Voorburg , Voorschoten , Wassenaar , Katwijk and Oegstgeest .

It is often said that Leiden is identical to the Roman settlement Lugdunum Batavorum . It is believed, however, that the present-day city did not emerge until the 11th century as a settlement around the Burcht . Nevertheless, Leiden used this Latin name until the early modern period. The Roman settlement was closer to Katwijk than to Leiden. However, between AD 47 and AD 275 at the latest, the Roman fort Matilo was on the soil of the Leiden district of Roomburg . The Fossa Corbulonis , which branches off from the Oude Rijn to the southwest towards the Meuse , an artificially created waterway at the same time, testifies to the massive presence of the Romans in what is now Leiden's urban area.

The wool trade with England and Flanders brought prosperity and prosperity to Leiden in the 13th and 14th centuries. The Dutch Count Floris V granted Leiden city ​​rights in 1266 . The 15th century was a period of economic crises because of the turmoil of the Hook and Cod War , a civil war.

“The Liberation of Leiden” (1574), left: Prince Wilhelm I of Orange, right: the mayor of Leiden Van der Werff

During the Eighty Years' War , Leiden joined the uprising against the Spaniards. After a siege that had lasted since May 25, 1574 , the Geusen succeeded in liberating the city on October 3, 1574 , among other things by flooding the surrounding polders . Legend has it that after the Spanish besiegers were driven out, a pan with carrot stew ( hutspot ) was found in their camp . This meant that the starved city population was able to have a proper meal again for the first time. That is why this dish is served in all restaurants every year during the celebrations of Leidens ontzet on October 3rd. As a thank you for the courage shown by the people of Leiden, shortly afterwards, by decision of the government under the leadership of William of Orange , the city received the first university in the Republic of the Netherlands .

Afterwards, many Protestants from Antwerp, Brussels and other areas conquered by the Spanish fled to Leiden, so that the city had to expand its city walls several times between 1575 and 1650. During this epoch Leiden experienced a great cultural and scientific development: painters like Rembrandt and his students and scientists like Antoni van Leeuwenhoek , the discoverer of bacteria , lived and worked in Leiden.

The Stadhuis / Raadhius von Leiden was significantly modernized from 1600 by Lüder von Bentheim and provided with the three Renaissance gables, which also modernized the Bremen town hall . 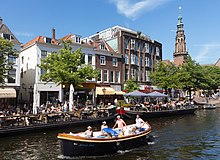 The town hall and boats in the Nieuwe Rijn

However, from around 1700 onwards there was another decline. To this day, however, the University of Leiden , at which the members of the Dutch royal family who are designated for royal dignity also study, has remained a stronghold of science in the Netherlands. For example, the physicist Pieter van Musschenbroek discovered the principle of the Leiden bottle in Leiden in 1746 when he received electric shocks during laboratory tests with the appropriate arrangements of glasses and metal parts.

The council of Leiden has 39 seats. Below is the compilation of the municipal council from 1982:

The city's cabinet has the following five city councilors for the period 2018-2022:

The city is the seat of Airbus SE and the Eurotransplant Foundation . IKEA's European headquarters , the INGKA Foundation , is also in Leiden. The armaments company KNDS and Heerema Marine Contractors are also based in Leiden.

The once important textile industry is no longer important. But Leiden also had other industries, for example the manufacture of lighters and steel processing. Today the tertiary sector (service sector) has a large market share. In Leiden u. a. Achmea , an insurance company, and many training institutes are based. The largest employer in the Leiden region is the hospital, which is located in the Bio Science Park Leiden , where several companies from the pharmaceutical and biotechnological industries have also settled.

Printing and publishing companies such as Elsevier and Brill have been world-famous for centuries for printing Latin, Asian and Arabic works.

There are direct rail connections from Leiden Centraal station to Rotterdam via The Hague , to Amsterdam via Schiphol or Haarlem Airport and to Utrecht via Woerden . There are also direct trains to Gouda at peak times . Other stations are De Vink (on the route to The Hague) and Leiden Lammenschans (on the route to Utrecht). 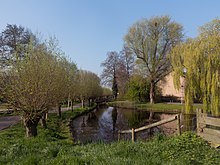 View of the street in Merenwijk

The municipality of Leiden is divided into four districts, ten districts and 54 so-called neighborhoods.

The 'Polderpark Cronesteyn' is located on the southeast side of the city, on the site of the former Cronesteyn Castle. This park consists of different cultural landscapes and has a heron forest. There is also a visitor center and a campsite. This park forms the connection between the city and the Groene Hart . 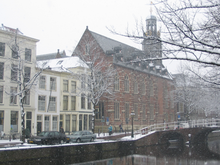 The Academiegebouw of the University of Leiden am Rapenburg

Two universities have their headquarters in Leiden. The University of Leiden was founded in 1575, making it the oldest university in the Netherlands . There are also many institutions and companies that are connected to this university and the like. a. the University Library in Leiden , the Observatory in Leiden and the University Hospital in Leids Universitair Medisch Centrum . The university has six faculties and more than 18,000 students. The core of the university is in the academy building. The University of Leiden also has its own botanical garden, observatory and university library. The Hogeschool Leiden is a technical college with around 6000 students and is located in the Leiden Bio Science Park . In this Bio Science Park there are also departments of biotechnological companies. The US Webster University has had a department in Leiden since 1983 .

There are also various institutions for vocational training in Leiden. The ROC Leiden , with more than 10,000 students, the ROC Mondriaan and the ID College . The 'Leidse Instrumentmakersschool' is a well-known school for precision mechanics . There is also a People's University in Leiden .

Overview of the secondary schools in Leiden: 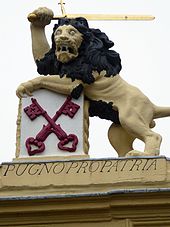 Coat of arms of Leiden 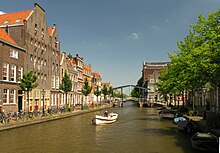 View from the bridge to the shipping company and mill 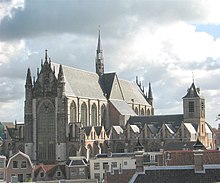 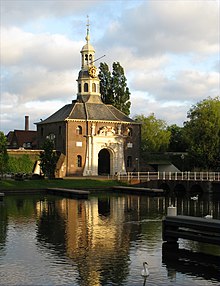 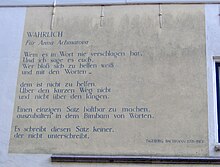 Bachmann's poem Verily on a house front in Leiden

The Pieterskerk ("St. Petrikirche"), construction started in 1121, dates mostly from the 16th century. There are many tombs of famous Dutch people in this church. St. Peter is the patron saint of suffering, hence the keys in the city's coat of arms (St. Peter has the keys to the heavenly gate). On special occasions such as B. Honorary doctorates or anniversaries, the Pieterskerk is used by the university as an auditorium. - Another Gothic church is the Hooglandse Kerk , the size of which towers high above the surrounding houses in the city center.

The main building of the university is located on one of the most famous canals in Holland, the Rapenburg , and was originally a monastery church.

Masterpieces of Renaissance architecture are the town hall (Stadhuis, Raadhuis), in whose design the Bremen builder Lüder von Bentheim was involved, and the Rijnhuis of the early modern water and shipping administration.

There are many hofjes spread across the city . These are groups of small, often very popular houses because of their simplicity, mostly around a courtyard with a fountain or herb garden, which were donated by rich people between 1600 and 1900. Thought as private retirement, widow or poor welfare institutions (compare the Fuggerei in Augsburg ), these little houses are now often inhabited by students or nurses. These hofjes are all under monument protection ( Rijksmonument ).

The Burcht is an artificially raised escape hill from the 11th or 12th century that was fortified and walled in the 17th century. It offers a good overview of the city center. In summer some events take place here such as B. Theatrical performances take place.

A specialty of Leiden are the Muurgedichten  ( wall poems ) that can be seen on the walls of houses in the street area of ​​the city center. The 101 texts by well-known and unknown poets from all over the world are the result of a project that began in 1992 with a poem by Marina Ivanovna Tsvetaeva and ended in 2011 with the poem Regen, meer en wind by Danila Stoyanova . The poems are painted in different designs in the original language and script on the walls of the houses.

Leiden also has various windmills . One of the last remaining is the Molen De Valk, which has been converted into a museum and shows the history of the mills in Leiden.

As a city of books, Leiden has the following major libraries:

There are various parishes in the city of Leiden.

→ Main article : List of personalities from the city of Leiden

Municipalities of the province of Zuid-Holland