The Fuggerei in Augsburg is the oldest existing social housing estate in the world. The row house settlement was donated by Jakob Fugger "der Reiche" in 1521. Today 150 needy Catholic citizens of Augsburg live in the 140 apartments of the 67 houses for an annual (cold) rent of 0.88 euros. To this end, they speak once a day an Our Father , a creed and an Ave Maria for the founder and the Fugger family . To this day, the social housing estate is maintained from Jakob Fugger's foundation assets. The Fürstlich und Gräflich Fugger Family Seniorat acts as a supervisory body for the Princely and Gräflich Fugger Foundation Administration , which looks after the Fuggerei and eight Fugger foundations. 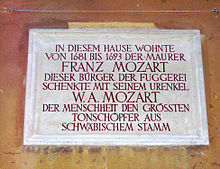 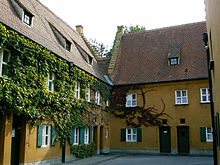 The Fuggerei was donated by Jakob Fugger on August 23, 1521 as a housing estate for needy citizens of Augsburg. The letter of foundation stipulated:

"Namely, so should such Hewser Poor people and craftsmen and burgers and residents of this city of Augsburg, which it is necessary and is best invested, for God's sake equal and in it neither has to be bared and was not viewed ..."

The complex was built between 1516 and 1523 under the direction of the builder Thomas Krebs. At that time, 52 apartments were built around the first six alleys. The apartments in the two-storey houses, which were built according to largely standardized floor plans, were generously planned for the conditions at the time they were built. The concept of the Fuggerei as helping people to help themselves was downright modern. The social settlement was for of poverty threatened artisans and laborers thought that could on their own, for example due to illness, lead independent households. They could pursue their livelihood inside and outside the Fuggerei and should move out again if the economy recovered. For the time, the residents of the Fuggerei were able to enjoy a luxurious privacy.

Up until the 20th century, the Fuggerei mainly housed families with several children. Only the “worthy poor” were allowed to move into the social housing estate. According to the will of the founder, beggars were not accepted.

The "Fuckerey" got its name as early as 1531. The first Fuggerei clergyman was the Jesuit Petrus Canisius , who was canonized in 1925 . In 1581/82, the master builder Hans Holl built the St. Markus Church in the settlement, donated by Markus and Philipp Eduard Fugger . In the Thirty Years War , the Fuggerei was largely destroyed by the Swedes until 1642. From 1681 until his death in 1694, Franz Mozart , the great-grandfather of the composer Wolfgang Amadeus Mozart , lived in the Fuggerei.

The Fuggerei was expanded in 1880 and 1938. During the Second World War , around two-thirds of the settlement was destroyed in a British air raid on the night of bombing in Augsburg from February 25th to 26th, 1944 in two air raids by the Royal Air Force on Augsburg. As early as March 1, 1944, the Princely and Countess Fugger Family Seniorat decided in writing to rebuild the Fuggerei.

From 1945 the social housing estate was rebuilt with funds from the foundation according to the plans of Raimund von Doblhoff according to the historical model, so that the first buildings could be occupied again in 1947. Reconstruction was completed in the 1950s . By 1973, the Fuggerei was expanded by around a third on the adjacent rubble property that was acquired, to 67 houses with 140 apartments today.

Most of the apartments in the Fuggerei are around 60 square meters and have their own entrance. Almost all of the apartments on the ground floor have a garden, those on the upper floor have a storage room. The apartments are connected to the district heating network of the city of Augsburg. The mechanical door bells, which are operated by a train, have been preserved throughout the age of electrics. The pendants and handles of the old bells are different, supposedly to avoid confusion in the dark Fuggerei (there was no street lighting yet). The conditions of admission are still the same as when it was founded: Anyone who wants to live in the Fuggerei must be Augsburg, Catholic and of good repute. The year (cold) rent for an apartment in the Fuggerei is still the nominal, inflation unappreciated value of a Rhenish guilder (converted 0.88 euro ). The tenants bear the additional costs (85 euros since July 1, 2013).

The ensemble with eight alleys and three gates is a "city within the city" with its own church, "city walls" and several "city gates". Since 2006, however, only one gate has been open to visitors, which is closed by the night watchman every evening from 10 p.m. to 5 a.m. Fuggerei residents who return through the Ochsentor by midnight give the night watchman a fee of 0.50 euros, then one euro. The main gate will be open again from 5 a.m. The property of the Fuggereistiftung consists of forests and real estate and finances the social housing estate to this day. From 2006 onwards tourism was added as a new source of economic income .

The Fuggerei is administered as one of nine Fugger foundations by the Fürstlich und Graeflich Fugger Foundation Administration. The foundation administrator is Wolf-Dietrich Graf von Hundt . The supervisory body of the administration is the Princely and Countess Fugger Family Senior Council. Since 2004, Countess Maria Elisabeth Thun-Fugger has been chairing the family senior council for the first time. Albert Graf Fugger von Glött as well as Hubertus Fürst Fugger-Babenhausen and Markus Graf Fugger-Babenhausen are also represented in it.

The Fuggerei is probably the most popular tourist destination in the city , along with the Augsburg town hall . Your visit costs admission, which is used to preserve the Fuggerei. In 2006 the Fuggerei Museum was considerably expanded and redesigned. It also houses the last original apartment, furnished in the style of the 18th century. Since 2007, a fully furnished show apartment in Ochsengasse has been showing how Fuggerei residents live today. In 2008 the museum was built in the "World War II bunker in the Fuggerei". In the preserved air raid shelter from 1943, the history of the building, the Augsburg bombing night of 25/26. February 1944, the years of reconstruction and the expansion of the Fuggerei up to 1973.

In the Fuggerimuseum, in the show apartment and in the World War II bunker, films explain the history of the foundation and the family that founded it. Several sights in the Fuggerei - from the church to Franz Mozart's house - have been signposted in German , Italian and English since 2006 . In 2007, the first and so far only Augsburg memorial for the founder of the Fuggerei, Jakob Fugger the Rich, was erected in the Fuggerei.