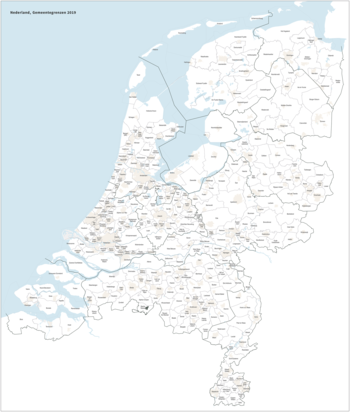 Map of the Dutch municipalities, 2019

The structure of the Dutch state with municipalities, provinces and the national level

A municipality ( Dutch gemeente ) is the third and lowest administrative level in the Netherlands after the imperial authority and the provinces . As of January 1, 2019, there are 355 municipalities in the Netherlands. There is a tendency to merge smaller parishes. In 2012, the new government even set itself the goal of only having communities with at least 100,000 inhabitants in the future.

In the European NUTS classification, NUTS1 is assigned to the landsdelen north, south, east and west (three provinces each, for example the north: Groningen, Friesland, Drenthe). NUTS2 is a province and NUTS3 is the COROP regions; This means forty units, each consisting of several communities, for example the Achterhoek , Zaanstreek or Noord-Overijssel. The landsdelen and the COROP regions are only used for statistics. Administratively, there are only the provinces and the municipalities, the latter correspond to LAU2 , as there is no LAU1 in the Netherlands.

Otherwise, a municipality can be composed of any localities that have no corresponding significance in the structure of the state. The municipality of Oude IJsselstreek consists of a small town, twelve villages and a few other localities. Sometimes the municipality is called the same as one of the localities, for example a distinction is made between gemeente Berg en Dal and plaats Berg en Dal . For postal addresses, the plaatsnaam ( German  place name ) is usually given . Anyone who lives in the village of Milsbeek in the municipality of Gennep therefore writes Milsbeek, not Gennep, in their letterhead.

At the head of the community is the College van burgemeester en wethouders (the community council). The mayor is appointed by the national government, which wethouders (German aldermen ) from gemeenteraad ( council selected). However, the local council is heard before the mayor is appointed and usually has the decisive influence. The mayor's posts in the largest cities in the country, on the other hand, are partly awarded according to the balance of power in the national parliament.