This article deals with parliament, for historical statehood see Republic of the Seven United Provinces .

Coat of arms of the States General

Originally, the States General, the “General Estates”, a conference of ambassadors, comparable to the Reichstag in the Holy Roman Empire . After the Netherlands broke away from the Habsburg Empire in the 16th century , the States General took on the decisive political role. After the French period (1795–1813), in which there were various forms of government, the Kingdom of the Netherlands was established in 1814/1815. At that time, the older term “States General” was used for the modern bicameral parliament.

The Chamber in which draft laws and amendments are introduced is the Second Chamber ; the great political debates take place there. When a majority of chambers express their distrust of the government (Dutch: motie van wantrouwen ), the government usually resigns. This emerged around the 1860s.

In order for a law to be adopted, both chambers must agree, including the first chamber . This is much less important, partly because it cannot change draft laws. It can only agree or reject the draft; the latter happens very rarely.

The second chamber is elected directly (with lists) by the Dutch citizens (if they do not have their main residence in Aruba , Curaçao or Sint Maarten ), the first chamber (also according to lists) by the members of the Provinciale Staten , i.e. the provincial parliaments. The countries of Aruba, Curaçao and Sint Maarten send bijzondere gedelegeerde to the chambers when they decide on laws that affect the Kingdom (provided that this does not only affect the Netherlands). 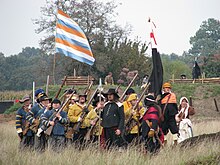 Historical reenactment in Groenlo in the east of the Netherlands , in which a battle of 1627 is re- enacted . Here the states with their flag (see also Prinsenvlag ), so "the estates".

Great Hall of the Binnenhof in The Hague, around 1651

Princess Beatrix at the speech from the throne in 1960 (instead of her mother) in the Ridderzaal .

Ridderzaal . The name comes from the 19th century.

In modern Dutch, the word for “Staat”, sta , is written with a double a , and the desired pronunciation with a long a. The majority, on the other hand, staten , only has a single a , since the open tone syllable sta- already ensures the long pronunciation. Hence it is called Staten-Generaal .

The name "States General" is not only used in older sources as another expression for the state name Republic of the Seven United Netherlands . This is due to the fact that the Staten-Generaal acted as sovereigns of the republic. In Dutch, the army of the states is referred to as het Staatse leger .

In the political parlance of the Netherlands, the expression “States General” is seldom used. The second chamber is much more important than the first and is therefore often referred to simply as kamer in the media ; the first chamber is traditionally also called Senaat . Expressly one thinks for some reason both chambers, one can of kamers both speak.

The history of the States General goes back to the Middle Ages . General assemblies of the estates took place as early as the 14th century . The stands were:

As early as January 9, 1464, a joint assembly called the Staten-Generaal of all Dutch regions (west) met in Bruges . She persuaded Philip the Good , especially at the request of the cities, to give his son Charles the Bold the dignity of governor . Later in the 15th and 16th centuries, Brussels was the seat of the States General.

The States General also played a major role in the early stages of the Eighty Years War . Through the Plakkaat van Verlatinghe , seven renegade provinces that had united in the Union of Utrecht declared their secession from the Spanish crown in 1581 . Brussels and the southern provinces remained under the rule of the Spanish king. The States General, which from then on formed the supreme decision-making body of the Republic of the Seven United Provinces , moved to The Hague .

In the Republic of the Seven United Provinces, the general assembly of estates functioned as a chamber of states . Each province, Holland , Zeeland , Utrecht , Overijssel , Gelderland or Gelre, Groningen and Friesland , had one vote. Parts of Flanders , Brabant and Gelre were administered by the States General as generals until 1795 : Staats-Vlaanderen , Staats-Brabant and Staats-Gelre .

As early as 1590, the States General described themselves in a resolution as “het souvereine college van den lande” (“the sovereign college of the country”) and thus as the bearer of sovereignty . This view was opposed to the far- reaching independence of the provinces to regulate their internal affairs and to appoint their governor , so that finally the view prevailed that the provinces had sovereignty. In this sense Johan de Witt spoke of the provinces as “respublicae foederatae” ('federated republics'). Accordingly, he viewed the Republic of the Seven United Provinces itself as merely a confederation . Regardless of this question of state and constitutional law, the “rulers” of the province of Holland, which held a hegemonic position among the provinces, proved to be the oligarchic leadership of the state in the realpolitik of the republic.

As a result of the French Revolution , in the course of the First Coalition War in 1795, the old republican and federal regime was overthrown and the Batavian Republic was established , which saw itself as a subsidiary of the French Republic and thus as a unitary state and therefore dissolved the previously sovereign provinces as well as the States General as a federal decision-making body.

In Brussels, in the Austrian Netherlands , the States General of the Southern States continued to exist as the General Estates of the Emperor until they also renounced the Emperor on January 11, 1790 and briefly founded the Republic of the United Belgian States ( États-Belgiques-Unis ).

In today's Netherlands it happens, albeit rarely, that both chambers meet together. This is called a United Assembly (Dutch: Verenigde Vergadering ). The Chairman of the First Chamber presides over the United Assembly .

Such a meeting takes place every year on the third Tuesday in September ( Prinsjesdag ). First, the monarch, together with his closest relatives, drives through The Hague in a carriage . The destination is the knight's hall , the oldest parliament building on the Hague Binnenhof . The monarch then reads out the speech from the throne written by the ministers . This speech discusses the government's programmatic objectives for the next parliamentary year (from September 1st to June 30th of the following year). On the same day the Rijksbegroting , the imperial budget , is announced. This Miljardennota was always preceded by the budget debate in the Second Chamber.

Other occasions for holding the united assembly are: