The provinces of the Netherlands go back to old feudal units, at the latest since the French period around 1800 they have had their current importance as administrative units of a central state . Since 1 January 1986, the divided Netherlands in twelve provinces ( provincies ).

The provinces are often divided into four groups:

The provinces, in turn, are divided into a total of 355  municipalities (gemeenten) (2019). In the European NUTS classification , the provinces correspond to the NUTS2 level. At the head of a province there is a Commissaris van de Koning ( Commissioner of the King ), appointed by the Reich Minister of the Interior. The commissioner presides over the provincial parliament, the Provinciale Staten , as well as the government of the province, it is called Gedeputeerde Staten . 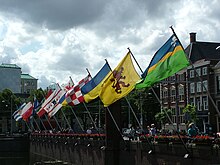 Flags of the provinces at the Binnenhof in The Hague

The Dutch provinces form the administrative level between the national government and the municipalities. Questions of regional importance are in their area of ​​responsibility. They are primarily entrusted with spatial planning and community supervision, as well as with a wide range of environmental, social and cultural issues. However, the framework conditions are set very closely by the ministries in The Hague. The vast majority of the income comes from the national provincial fund . Only the motor vehicle tax can be determined by the provinces themselves and varies greatly from province to province.

The provinces are not to be equated with German federal states, because they have no state quality and can be reorganized by the Dutch interior minister. Hardly anything has changed in the classification since the 19th century. There are, however, efforts to combine the northern provinces, to unite Overijssel and Gelderland or to set up city provinces (e.g. Rotterdam) in the Randstad . A more extensive proposal by the D66 party wants to replace the provinces with a handful of parts of the country. In 2012, the second Rutte cabinet announced that it would replace the twelve provinces with five parts of the country in the long term.

The population's interest in the provinces is rather low, which can also be seen in the low voter turnout for the provincial states (the 60 percent from 2011 were above average). The provincial states of all provinces jointly elect the members of the First Chamber of the Dutch Parliament, which also has a much smaller role than, for example, the German Federal Council.

The Interprovinciaal Overleg (IPO, roughly: Consultation between the provinces) has existed since 1986 . Each province has a seat there. As a cooperation body, the IPO deals with topics such as coalition agreements, savings, and questions relating to laws. It has several dozen employees and resides in The Hague opposite the Vereniging van Nederlandse Gemeenten building . Like this association of municipalities, the IPO is a registered association.

Traditionally, the three western provinces of North Holland, South Holland and Utrecht (the Randstad ) were considered rich and the others were comparatively poorer. Nowadays the picture is more nuanced. Gelderland and Overijssel in particular received a lot of money from the sale of energy stocks. The western provinces including Flevoland and the north are all poor. 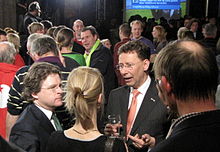 Clemens Cornielje (VVD), then Commissioner of the Queen in Gelderland, on the election evening of the provincial parliament in Arnhem 2011. The Commissaris usually belongs to a party, but does not play a role in the election campaign.

In Friesland , for example , the Commissaris is from the VVD party , there are also five deputies in the college , two from the CDA , two from the PvdA and one from the “ChristenUnie”. One of the Gedeputeerden is also loco-commissaris , a kind of (democratic legitimacy) representative of the commissaris . GS is supported by a secretaris-director ; in the other provinces his title is provinciesecretaris .

Commons : Provinces of the Netherlands  - Collection of images, videos and audio files