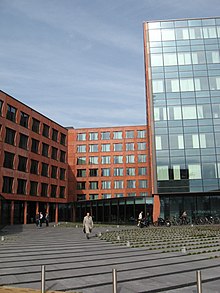 The Centraal Bureau voor de Statistiek ( CBS ; German  Central Office for Statistics ) is the Dutch counterpart to the Federal Statistical Office . The official English name of the authority is Statistics Netherlands .

The authority has two seats: in the city of Heerlen ( Limburg province ) and in Voorburg near The Hague . The CBS collects data to produce statistics on almost every area of ​​Dutch society. In part, it collects data by working with gemeentelijke basisadministraties , population and registry offices in the individual municipalities, and in part by sending companies forms on sales, costs, balance sheet data , investments , etc. This has been done via the Internet since 2007 . The companies included in the sample are legally obliged to fill out the forms and send them back. If this rule is violated, the CBS is entitled to impose fines. Up until 2006, this was not a popular task for the companies concerned, because the figures sometimes had to be calculated very differently than the accounting rules in the Netherlands determine.

The very informative website (also in English) and the publications of the CBS are the main source of a lot of statistical data about the Netherlands. Most of this data is freely accessible via the website.

The CBS was founded in January 1899. Until 2004 it was subordinate to the Ministerie voor Economische Zaken , the Ministry of Economics of the Netherlands, then became an independent authority.