The title of this article is ambiguous. For the watchmaker of the same name, see Egbert Jans van Leeuwarden . 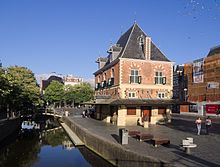 Leeuwarden [ ˈleːu̯ˌʋɑrdə (n) ] ( listen ? / I ) ( West Frisian Ljouwert ( listen ? / I )) is a city in the Dutch province of Friesland and the administrative seat of the province. In 2018 Leeuwarden was together with Valletta ( Malta ) the European Capital of Culture.

Leeuwarden is located in the province of Friesland in the north of the Netherlands .

The area has been settled at least since the 10th century. Recent excavations may show the remains of dwellings from the 2nd century.

Originally there were three terpene ( mounds ), whereupon the three villages Oldehove , Nijehove and Hoek were. In the 14th and 15th centuries they grew into the new city of Leeuwarden. The city received city ​​rights in 1435 . Due to its location on the Middelzee, a bay in the Wadden Sea , Leeuwarden was a busy trading center until the waterway dried up in the 15th century. After that, the city only had regional importance as a cattle market in the surrounding meadow areas and, after it had submitted to Albrecht of Saxony in 1498 and recognized him as the heir of Friesland, as the administrative center of Friesland.

Around 1600 Leeuwarden was temporarily a large city with 15,000 inhabitants, even under the conditions at the time. Leeuwarden was the seat of the governor of the province of Friesland, one of the seven provinces of the Republic of the Netherlands , from the 16th century . Unlike the five other districts, Friesland and Groningen had their own governors . One of them was Johann Wilhelm Friso von Nassau-Dietz , who was followed by his widow Marie Luise von Hessen-Kassel after his early accidental death in 1711 . This princess, very popular with the Frisians and known as Marijke Meu (Aunt Maria), bought a large house in the city in 1731, which has since been called the Princessehof. Marijke Meu collected precious porcelain; Her collection is still in the possession of the Princessehof Ceramic Museum , which is located in the same building.

In the 18th and early 19th centuries, Leeuwarden flourished again when it was connected to the railway network (around 1868). In 1901 the city had 32,203 inhabitants. 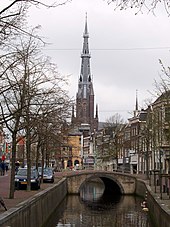 During the Second World War , the city was occupied by the German Wehrmacht from 1940 until it was captured by the Royal Canadian Dragoons on April 15, 1945 .

The name Leeuwarden was first mentioned in the early 9th century. However, there is great uncertainty about the name, of which over 200 spelling variants are known. Leeuwarden ( Dutch ), Liwwadden ( city ​​Frisian ) and Ljouwert ( West Frisian ) are still in use today .

The second component -warden is the Dutch-Frisian name for a terp . The first syllable can be interpreted as leeu- or leeuw- , Dutch for “lion”. This interpretation is supported by some scholars with reference to the city ​​coat of arms . But there is no w in the name. Other researchers are of the opinion that the name comes from the prefix leeu- , a falsification of luw- meaning “lee”, “protected from water”, or from lee- meaning “water cycle”. A mutilated personal name is also considered a possible origin.

Leeuwarden is the economic center of the province of Friesland . Numerous jobs in Friesland are located in Leeuwarden. In addition, Leeuwarden is one of the largest service cities with u. a. many financial service providers, government agencies and government institutions. Tourism is also an important pillar. Industrial products in Leeuwarden include clothing, rayon, linen fabrics, machines and food.

The city is on the German-Dutch holiday route Oranier Route . In the vicinity of Leeuwarden are the motorways A32 towards Heerenveen and Zwolle , and A31 to the final dike / A7 to Den Helder and Amsterdam .

Canals connect the city's port with Groningen (via the Langdeel connection to the Prinses-Margriet Canal ) and Harlingen (Van Harinxmakanaal).

There are train connections from Leeuwarden station to Amersfoort via Zwolle ( Intercity , once an hour); Stoptrein ( local train ) to Zwolle, to Groningen, Harlingen and Stavoren via Sneek (all local trains).

You can study at the Noordelijke Hogeschool Leeuwarden, the Van Hall Instituut and the Stenden Hogeschool , which currently teach around 15,000 students. Furthermore, the University of Groningen , which is one of the oldest universities in Europe, has been represented by a satellite campus in Leeuwarden since 2018 .

The local elections on November 22, 2017 resulted in the following distribution of seats:

In addition to the city, the municipality of Leeuwarden also includes numerous villages and smaller rural settlements (Buurschappen).

City (as part of the municipality) and rural settlements, population as of January 1, 2012: 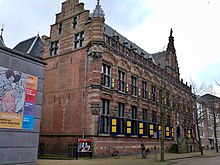 Many typical narrow-breasted town houses from the 17th and 18th centuries have been preserved in the old town. Known other structures are for example

The dark building of the Achmea insurance company, located near the train station, is the tallest building in the city at around 114 meters.

View of the language pavilion, in front of it the large-format multilingual text "Language makes us human"

For 2018, one of the two titles of European Capital of Culture, limited to one year, was awarded to the Netherlands. On September 6, 2013 it became known that Leeuwarden was able to prevail in the Dutch selection committee ahead of the remaining competitors Eindhoven and Maastricht with the Euregio Meuse-Rhine . Another European Capital of Culture in 2018 is Valletta (Malta).

The program and the cultural activities were organized by Leeuwarden together with the province of Friesland under the abbreviation LF2018 and extended across the entire province. Eleven fountains were built in the eleven Frisian cities , major events were held in Harlingen and other places, and an open-air gallery with over 400 paintings was set up in Sloten . Leeuwarden itself focused on the topic of language under the title “Lân fan taal” (Land of Language): A pavilion opposite the Oldehove demonstrated the multitude of languages ​​spoken, another “Living Room of Languages” was a venue for weekly changing languages ​​and cultures. References in the cityscape to the topic provided food for thought. 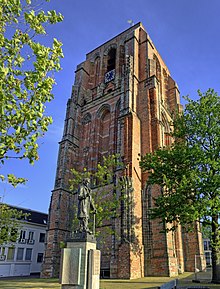 Municipalities in the province of Fryslân