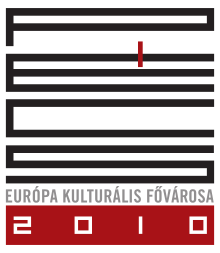 Logo of the cultural capital of Pécs 2010

In the run-up to the event, in 2009, the city of Pécs was awarded the Melina Mercouri Prize , which is awarded for extraordinary cultural and political efforts. The amount associated with the award was to be used for the artistic program.

After the invitation to tender in 2004 showed that a Hungarian city would have the opportunity to present itself as a cultural capital in 2010, an internal tender was launched. A total of eleven cities applied. A first selection was made in March, where only seven cities with the following topics were shortlisted:

The other cities of Kaposvár , Kecskemét , Székesfehérvár and Veszprém are eliminated. A national coordinating body, the Ministry of National Cultural Heritage , has been set up.

In the end, the Hungarian government put Pécs in first place, Miskolc and Debrecen in second and third place in Brussels, and the jury gave Pécs the bid.

Even if the majority of the preparations were made in small steps, there were still a few milestones that should be retained after the Capital of Culture year. A knowledge center with a new library as well as a conference and seminar center was built. The costs amounted to 4.6 billion forints (almost 17 million euros), some of which the European Union took over. In the old part of Tettye , parts of the Renaissance estate were or are being restored by Bishop György Szathmáry .

One of the expansion plans, which should still have an effect after the year is over, is the expansion of the Zsolnay porcelain factory into a cultural quarter. These Art Nouveau buildings were expanded as an artists' quarter into an exhibition center with the necessary catering. Up to 200,000 visitors should be able to attend cultural events annually on an area of ​​41,000 m². In the south of the Zsolny district there will be buildings available for the art institutes of the University of Pécs .

The aim should not only be art, but also the promotion of infrastructure, such as the construction of the section of the M60 Budapest-Pécs motorway .

Criticism was already voiced during the preparations by the minorities, who perceive the public's dealings with the fellow citizens of the minorities in advertising as embellished, while the reality is different. For example, the Gandhi grammar school is highlighted as the first Roma grammar school, while the Romany themselves would be excluded in reality.

The official opening ceremonies of the 2010 Capital of Culture year took place on January 10, 2010 in the presence of the Hungarian Prime Minister Gordon Bajnai and reflected the multi-ethnic history of the city of Pécs.

With the help of several hundred actors, all the epochs that shaped the city were represented. A visual arc was drawn from Roman history through the Ottoman period to the most recent cultural history. A laser show and slide projections on the Ottoman mosque, a landmark of Pécs, supported the spectacle.

Fireworks and the world premiere of the song Várj míg felkel majd a Nap (“Wait until the sun comes up”) by the Hungarian pop star Ferenc Demjén rounded off the opening.

Since Istanbul is also the European Capital of Culture in 2010 , Turkey is given special consideration, precisely because of the Ottoman history of Pécs.

In addition to individual events, dance, theater, literature, film and music festivals are held throughout the year.

The Pécs Spring Festival (March 15 to April 7, 2010) covers a wide area, stylistically covering both classical and contemporary arts and ranging from literary performances, folk art, dance, theater to choral and orchestral music. Part of the festival is also the III. International jazz weekend on March 21 and 22, 2010.

Almost 400 people have registered for the Fringe Festival (April 2-4, 2010), who will cover many artistic areas with solo or group performances based on the model of the Fringe Festival in Edinburgh . Theater, puppet theater, music, dance and literary performances are planned for this festival. This Fringe Festival, which takes place in Pécs and is part of the Budapest Fringe Festival, offers an alternative program in addition to the actual program for the year of the Capital of Culture year, with a platform for young, previously unknown artists.

The circus and street theater festival taking place in July 2010 tries with the help of the participating artists from the perspective of a non-local to bring the special features of the city of Pécs closer to both the residents and all visitors. During the performances, a relationship with the audience should be established in order to explore the usual social connections, actions and behavior of people in a city. These presentations are accompanied by workshops and analysis meetings. The presentations, events and performances take place both in a circus tent and outdoors. In addition to individual performances by various acrobats, jugglers and other circus artists, the festival will premiere the new program of the French Circus Academy (Le Center National des Arts du Cirque - Châlons en Champagne).

The Sétatér Festival ("Tummelplatz Festival") is described as one of the most important highlights (June 12-21 , 2010) and takes place according to its name on the Promenade Square (Sétatér) in Pécs. In addition to popular music performances, the festival also includes jazz, with Hungarian artists as well as prominent international groups invited. In addition to modern dance performances, folklore groups will also highlight the city's multicultural background. The festival is rounded off by installations and exhibitions created by students of fine arts at Pécs University.

The Grand Prix of Hungarian Marching Music (July 1 to 14, 2010) functions both as an international brass music competition and as a festival with a more than 300-hour music program, to which over 3,000 participants are expected to give over 200 concerts. The event is primarily intended for amateur orchestras and bands who want to present their musical spectrum in concerts, although participation in the competition is not mandatory. As a supporting program, visitors can also look forward to an international music exhibition including a music fair and a master class.

The international puppet festival (23-28 August 2010) for adults is only held every third year and offers a competition for amateurs and professionals on the one hand, and gala performances by renowned artists. Guests from Indonesia are also expected with a traditional shadow play , a Vietnamese water puppet theater and a bunraku performance from Japan.

The International Dance Meeting (September 20-25, 2010) spans a range from traditional dance groups to modern ballet. In cooperation with Josef Nadj, the director of the world-famous Center Chorégraphique National d'Orléans, a new dance program is being created in a Hungarian-Serbian-French coproduction.

Balkan World Music Festival and III. international and interdisciplinary conference at the gates of the Balkans

As a supporting program, exhibitions of contemporary art, philosophical and literary workshops are offered, supplemented by the opportunity to enter into public discussion with artists and thinkers. The aim is to provide a basis for interaction between different cultures.

The title of the parallel conference The 4th Meeting At The Balkan is: "Abolition of all cultural differences - the ethics, poetics and politics of unlimited hospitality". The aim is to develop ways of intelligently and comprehensively redefining the image of the Balkans.

As a university town, Pécs will be offering a colorful spectrum of demanding and easily entertaining music during the Pécs University Days (April 21 to 24, 2010) as a festival for students. A total of 30 Hungarian and ten international music formations will perform. The festival is accompanied by exhibitions and artistic installations.

The Eight Europe exhibition (October 18, 2010 to April 30, 2011) commemorates the legendary Budapest exhibitions of the Hungarian avant-garde at the beginning of the 20th century, which opened a new period in the history of Hungarian art as the Eight and from 1905 to 1915 developed a new painting and graphic style direction parallel to contemporary art. Over 200 pictures, graphics, sculptures and embroidery by the artists Vilmos Fémes Beck , Róbert Berény , Dezső Czigány , Béla Czóbel , Károly Kernstok , Anna Lesznai , Ödön Márffy , Dezső Orbán , Bertalan Pór , Lajos Tihanyi and Márk Vedres are on display.

From Art to Life - Hungary under the spell of Bauhaus architecture

The exhibition From Art to Life - Hungary under the spell of Bauhaus architecture (August 15 to October 15, 2010) shows what an important role the city of Pécs and the surrounding area plays in the history of modern art and architecture, which the members of the Bauhaus in particular play owes. The works of Bauhaus artists Marcel Breuer , Alfréd Forbát , Hugó Johan , Farkas Molnár , Henrik Stefán , Andor Weininger and Etel Fodor are presented in an extensive exhibition that includes the fine arts, applied graphics, design, architecture and theater projects. This is supplemented by a supporting program that includes both family days and special children's programs. Local tours document the activities of the Bauhaus artists in Pécs and the surrounding area, Bauhaus festivals such as the Kite Festival and the Lantern Festival are to be revived and ultimately theater and puppet theater productions in the spirit of the Bauhaus are to be performed. The exhibition is organized in cooperation with the Bauhaus Archive in Berlin and the Janus Pannonius Museum .

Over 1000 participants, choir members, conductors and music educators from Europe and other continents will meet at the Pécs Cantat (August 15-22, 2010) to develop and perform works by the Hungarian composers Zoltán Kodály and Béla Bartók . Residents and visitors have the special opportunity to make music together with the participants of the Pécs Cantat as part of evening events in the Pécs Cathedral.