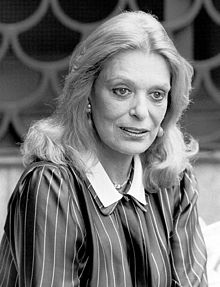 Maria Amalia Mercouri came from an upper-class family. The grandfather Spyros Merkouris was elected mayor of Athens for 30 years. Her father, Stamatis Merkouris, was a member of the Greek Parliament and briefly Minister of the Interior of Greece. After her parents separated, Melina lived with her grandfather, who refused her desire to become an actress. After graduating from high school, she married the elderly rich businessman Pan Charakopos in 1939 (elsewhere it is given as 1941), went to drama school and began performing at the Greek National Theater in Athens. She made her debut in 1944 in an avant-garde piece by Alexis Solomos. Reviews said the actress was "too young, too tall, too blonde, clumsy, lacking in talent".

The artist's marriage did not last long. In 1949, after brief appearances in the provinces, Melina Mercouri went to the theater metropolis of Paris, but soon returned home.

She began her career as a film actress in 1955 in the Greek film Stella , directed by Michalis Kakogiannis . The film received the American Film Critics' Award for Best Foreign Film of the Year. In Cannes, where Stella was also nominated, she met the Jewish-exiled American director Jules Dassin in 1955 , with whom she stayed together for the rest of her life and whom she married in 1966. In 1956 she starred under his direction in the film The Man Who Must Die . This was followed by Demon Woman , a weak costume colportage.

It became popular with international audiences in 1960 through the comedy Sunday… never! known, directed by Dassin again. For the role of the fun-loving whore Ilya she won the Actor Award of the Cannes Film Festival in 1960 and received a nomination for the Oscar for best actress . The title song, composed by Manos Hadjidakis , which has been covered by many singers around the world, received the award for the best film music. From this film onwards the year of birth of the artist was rumored to be 1925.

Your world success with Sundays never! opened the way for her to further large-scale productions. She celebrated success in films such as Phaedra (1962) - Mikis Theodorakis wrote the music for this -, Topkapi (1964), Hot Plaster Chicago (1969) and Promise in the Twilight (1970). Melina Mercouri also played the role of Illya in 1967/1968 in the Broadway musical Illya Darling .

During the seven-year military dictatorship in Greece between 1967 and 1974, Mercouri lived in exile in France. When the artist publicly took a stand against the regime, the rulers revoked her Greek citizenship, her passport was declared invalid, and Mercouri had great difficulties traveling internationally.

She responded to the expatriation with the sentence: “I was born a Greek and will die a Greek. Mr. Pattakos (then Greek Interior Minister) was born a fascist. He will die a fascist. ”She gave her autobiography , published in 1971, the title I was born a Greek . Melina Mercouri also made her criticism of the regime clear on the tours that took her around the world as a singer.

After the fall of the military junta and the re-establishment of democracy on July 24, 1974, the artist returned to her home country. In 1977 she was elected to the Greek parliament for the first time as a PASOK member. She made her last film in 1978: A Dream of Passion .

In October 1981 the newly elected Greek Prime Minister Andreas Papandreou brought her into his cabinet as Minister of Culture. She held this office from 1981 to 1989 and again from 1993 to 1994. The establishment of the annual European Capital of Culture goes back to Mercouri's initiative . Among other things, she campaigned for the Parthenon Fries ( Elgin Marbles ) to be returned to Greece from the British Museum in London.

In 1989 the artist, who smoked her first cigarette at the age of eleven, was operated on for the first time for lung cancer. A year later she ran for the office of Athens mayor, but lost the election against Antonis Tritsis very narrowly. On March 6, 1994, Melina Mercouri died after surgery at the Memorial Sloan Kettering Cancer Center in New York. Their final resting place is in the First Athens Cemetery (Πρώτο Νεκροταφείο Αθηνών - Próto Nekrotafío Athinón).

After the death of his wife, Jules Dassin founded the Melina Mercouri Foundation , which keeps the memory and visions of the actress and politician alive. The Melina Mercouri Prize for the preservation of cultural landscapes , which has been awarded since the late 1990s, commemorates her commitment to cultural policy . Jules Dassin died in Athens on March 31, 2008 and was buried next to his wife.