An autobiography ( ancient Greek αὐτός autós 'self', βίος bíos 'life' and γράφειν gráphein 'write', 'describe') is the description of one's own life story or parts of it from the retrospective (in contrast to the diary, for example ). What is special about this literary form is the identity between author and narrator and protagonist. Despite its explicitly subjective perspective, the autobiography has a greater claim to objectivity than the autobiographical novel . Memoirs related to autobiography place particular emphasis on the representation of contemporary events. Its “border crossing between history and literature ” puts the autobiography in a literary “marginal position”. With their help, however, core areas of literary studies are fundamentally redefined (for example by Paul de Man ).

First print from 1811-1814 of the three-volume autobiography From my life. Poetry and Truth by Johann Wolfgang von Goethe 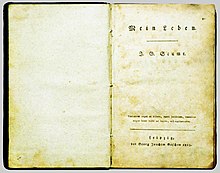 Autobiographies relate to historical reality in some way, this makes the autobiography a referential text. On the other hand, it is also obvious that it cannot meet this requirement, since objective reporting is opposed to the subjective author's position. It is obvious that no one is able to leave subjective perception behind. In contrast to the purely fictional genres, the autobiography is characterized by the structural openness towards the end: no autobiographer has yet described his own death. In literature, however, there are numerous examples where writers imagined and anticipated their own death, see the will of François Villon and Franz Kafka's The Metamorphosis . Some autobiographical books that deal with the own, life-threatening and traumatic experiences over time in the concentration camps of the Nazis were, such as Imre Kertész , also include death experiences. The boundary between autobiographical and fictional texts becomes fluid when an author combines a fictional event with autobiographical elements so that an autofictional text is created.

It was with this in mind that Wilhelm II wrote his memoirs; Goethe's autobiography Poetry and Truth ends with his first major book success.

History of the Autobiography

Problems are encountered in establishing the Greek autobiography of the classical period. There are texts with autobiographical tendencies, but no autobiography per se. One example is the travel report of the Ion of Chios (FGrHist 392 F 4-7), which is only preserved in fragments. The next two points also make it clear that you have to use other genres in order to write autobiographical texts.

The development of the literary genre autobiography is often associated with the development of the bourgeoisie in the free cities. However, there was previously, particularly as regards the German-speaking world, medieval experience reports of mystics and mystics , have the autobiographical references, such as in the writings of Mechthild of Magdeburg (1207-1290), Margareta Ebner (1291-1351) and Katharina Tucher († 1488). According to Bihlmeyer, the vita of the Dominican and mystic Heinrich Seuse (approx. 1295–1366) is considered to be “the first example of an autobiography in German that was written, or authorized and published, by the hero himself”.

With the growing role of the individual from the Renaissance onwards , the potential for autobiographical literature grew (cf. for example Francesco Petrarca ). The Enlightenment in the 18th century represents a special threshold ( Jean-Jacques Rousseau's “Confessions” as a secularized counterpart to the Confessions of St. Augustine ).

The production of autobiographical literature has increased steadily since the 19th century and has now become part of the booming non-fiction market . Politicians, artists and other celebrities write autobiographies, often with the help of "ghostwriters", which often have the character of justifications. Paul Delaney coined the term ad hoc autobiography for autobiographies that are written out of a desire to use a passing celebrity commercially . But even the so-called “simple” and “little” people are increasingly being helped by professional ghostwriters when writing their life stories .

Since the 1970s, as part of the research focus on history from below and sociological biographical research, the popular autobiography has received increasing academic interest. As a rule, these are writings written privately for the family circle, which can serve as sources for past historical circumstances. The oral history of contemporary witnesses is also increasingly being recorded in writing in the form of interviews. The documentation of biographical records at the University of Vienna has a collection of around 3000 such autobiographical testimonies. Similar institutions can be found today in almost all European countries. A particularly prominent collector of autobiographical evidence was the German writer Walter Kempowski ( Das Echolot ).

One name for such a work in ancient times was apologia . It was more of a justification than introspection. John Henry Newman's autobiography is an apologia pro vita sua. Augustine used the title Confessiones for his autobiographical work and Jean-Jacques Rousseau adopted this title in French: Confessions. The Autobiography of Benjamin Franklin , the first secular biography published in the United States, served as a model for later American autobiographies. Otto von Bismarck wrote thoughts and memories as an apology. The best-known German-language autobiographies include Goethe's Poetry and Truth and Johann Gottfried Seumes Mein Leben .

Elias Canetti has published a multi-part autobiography cycle for which he a. a. 1981 got the Nobel Prize. Mark Twain was probably the first person to include photographs in their autobiography.