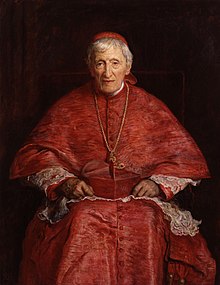 John Henry Cardinal Newman CO (born February 21, 1801 in London , † August 11, 1890 in Edgbaston ) was a cardinal of the Roman Catholic Church , to which he converted in 1845 . He was previously a pastor in the Church of England . Through his academic and literary work, as well as his conversion, Newman had a profound influence on the intellectual life of England and Europe in the 19th and 20th centuries. He is one of the pioneers of a Catholicism that was responsible before the knowledge horizon of modernity . John Henry Newman was beatified on September 19, 2010 and canonized on October 13, 2019 .

John Henry Newman was born in London on February 21, 1801. In his parents' house there was an atmosphere of a Christian educated middle class . At the age of fifteen he got into a spiritual and religious crisis, caused by the age-related identity problems and the reading of scriptures critical of religion . The crisis resulted in a move towards the " evangelical ", i. H. decidedly pious Anglicanism ("first conversion"). Since then, God was and remained for him the undoubted and all-determining voice of conscience.

In 1817 Newman entered Trinity College , Oxford as a theology student , where he deepened his education in many fields. In April 1822 he was elected a Fellow at Oriel College (Oxford). On June 4, 1823 he was awarded the Master of Arts , the Bachelor of Divinity followed on October 26, 1836. Bishop Edward Legge consecrated him on June 13, 1824 in the Oxford Christ Church Cathedral as a deacon of the Anglican Church and appointed him as a curate to St. Clement's Church in Oxford. On May 28, 1825, he was ordained anglican priest in Oxford Cathedral . With him we received the consecration and a. TT Churton and Charles Dodgson, the father of Lewis Carroll . In 1826 he was appointed tutor at Oriel College Oxford, and in March 1828 he was appointed vicar at St. Mary’s University Church in Oxford. In November of the same year, he was appointed to the Public Examiner , i.e. to take university exams.

Travel to Italy and Anglo-Catholicism

In 1832 he went on a trip to Italy, which also took him to Rome . When he fell critically ill in Sicily , he realized: “I will not die because I have not sinned against the light. […] I have a work to do in England. ”On the journey home, at sea, some of his famous poems were written in 1833, such as The pillar of the cloud (“ Lead, kindly light… ”).

Since his trip to Rome he turned away from the subject-centeredness of evangelical theology of piety and towards an objective- sacramental view of church and Christianity . The study of the theologians of the Old Church, who were normative in the Anglican Church, played the decisive role. Alongside John Keble and Edward Bouverie Pusey, Newman became the leading head of the Anglo-Catholic movement that sought a renewal of the Church of England from the doctrine and liturgy of the Old Church.

The ideas of the movement were propagated in the Tracts for the Time published by Newman. In 1841, in the 90th tract of the series, Newman questioned the thirty-nine articles and thus the legitimacy of Anglicanism, which led to a protest on the part of influential lecturers in Oxford (led by Churton, consecrated with Newman, meanwhile Vice-Principal at Brasenose College ) and Newman moved the To discontinue series of tracts, even if he did not deviate from his position as regards content.

The more he moved from a rigid, evangelical dogmatism , derived directly from the Bible , to an organic view that accepted the historical development of the church's doctrine (as if from a seed), the more irrefutable for him the Roman Church was the true and legitimate continuation of the Early church . At the same time, journeys had expanded and corrected his knowledge of Catholic religiosity.

The other front of his thinking remained (before and after the conversion) the rejection of theological liberalism , which does not recognize dogmatic formulations as binding and retreats to morality and feeling.

In the Catholic Church

After long internal struggles, Dominic Barberi accepted him into the Catholic Church in October 1845 . He was ordained a priest in Rome on Trinity Sunday, 1847 . With his companions he became a member of the Oratorian community , which he planted and led in England.

Newman's life after the conversion was marked by hostility on the Anglican side and distrust on the Catholic side. There one saw in him the apostate , here the thinker still dominated by liberal Protestant categories. The English ultramontanes disliked his intellectual independence. Monsignor George Talbot (1816–1886), the secretary of Pope Pius IX. , Cardinal Henry Edward Manning , the Archbishop of Westminster , warned in a letter: “Dr. Newman is the most dangerous man in England. ”So the rectorate of the newly founded Catholic University of Ireland in Dublin was withdrawn from him after a few years. However, through his great pastoral instinct, his unconditional sincerity and his high intellectuality, which were expressed in his correspondence and his books, he gained increasing esteem and respect on all sides. His life justification Apologia pro vita sua (1864), with which he responded to the violent attacks by Charles Kingsley against his credibility, was decisive. His Grammar of Assent (1870) can also be read as an important contribution to Analysis fidei . 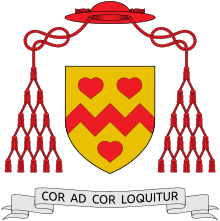 Newman considered the definition of papal infallibility in official doctrinal decisions at the First Vatican Council to be tactically inopportune, but correct in terms of content. It was therefore accepted by him and encouraged him to further clarify the question of authority in the church. He declined invitations to participate as a theologian at the council .

In 1877 Newman received the title of "Honorary Fellow" of his old Oxford University, in 1879 he was appointed by Pope Leo XIII. appointed cardinal deacon with the title deaconry San Giorgio in Velabro and thus recognized and honored on both sides of the denominational divide.

Newman died in Edgbaston on August 11, 1890. At the time of his death he had been cardinal protodeacon for six months and, at 89, the oldest member of the college of cardinals.

The beatification of Newman soon after his death was the wish of many believers. Numerous Newman monuments across England, including the London Monument from 1896, bear witness to the devotion shown to him. In October 1945 Pope Pius XII paid tribute to him . on the occasion of the 100th anniversary of his conversion. In 1955 the formal beatification process was opened, which took an unexpectedly long time. The reason given is Newman's extensive literature that had to be examined. In 1991 Pope John Paul II awarded Newman the title of Venerable Servant of God .

On 11 August 2008, Newman's 118th anniversary, the British granted Justice Department approval, the remains of Cardinal Newman to exhume and in a sarcophagus in the Oratory Church of Birmingham to transfer. When the grave was opened in Rednal on October 3, 2008, only the remains of clothes were found in the coffin.

On July 3, 2009, Pope Benedict XVI authorized the decree recognizing the authenticity of the miracle attributed to the intercession of the Venerable Servant of God Cardinal John Henry Newman. On September 19, 2010, Pope Benedict XVI spoke. Newman blessed at a service in Cofton Park, Birmingham. As a liturgical memorial he determined the Oct. 9 , the day of Newman's inclusion in the Catholic Church.

On January 15, 2011, Benedict XVI. the newly established staff ordinariate of Our Lady of Walsingham under the patronage of Blessed John Henry Newman.

On February 12, 2019, Pope Francis confirmed a miracle attributed to Newman's intercession as the final requirement for canonization. The canonization was canonized by Pope Francis on October 13, 2019 in Rome.

The first editions are given. In addition, various volumes of sermons and open letters as well as a complete edition of his works compiled by himself were published in the 1860s and 1870s. After his death several compilations of letters and similar occasional publications were published. The most important works are accessible in German in the Selected Works in nine volumes (edited by Matthias Laros and Werner Becker; Matthias-Grünewald-Verlag , Mainz 1951–1975).