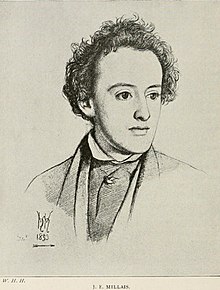 Sir John Everett Millais, 1st Baronet [ ˈmilɛː ] PRA (born June 8, 1829 in Southampton , † August 13, 1896 in London ) was a British painter from the Pre-Raphaelite circle . Millais was the first artist to be bestowed the hereditary title of baronet .

John Everett Millais came from a middle-class Jersey family . His parents were John William Millais (1800-1870) and Mary Evamy (1789-1864). Between 1833 and 1838 he lived in St. Helier , Jersey, and in Dinan , Brittany. As a child prodigy, he attended Sass' Art School from 1838 to 1839 and won a silver medal from the Royal Society of Arts at the age of nine . In 1840, at the age of eleven, he was admitted - the youngest member of all time - to the Royal Academy of Arts in London by Sir Martin Archer Shee , which he successfully completed by 1847. Here he was called "the child". In 1843 he received the silver medal for a drawing of antiquity. His painting The Tribe of Benjamin Seizing the Daughters of Shiloh was awarded a gold medal in 1847. In 1846 he was represented for the first time at the exhibition of the Royal Academy with his picture Pizarro Seizing the Inca of Peru (1.28 × 1.72 m). 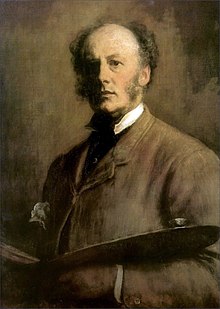 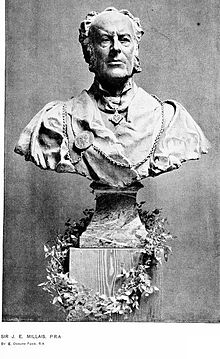 In July 1848 the Cyclographic Society was founded with the members: Everett Millais, Frederic George Stephens , Thomas Woolner , James Collinson , Walter Howell Deverell as well as Holman Hunt and Dante Gabriel Rossetti . Her designs circulated in this circle, e.g. B. the drawing by Rossetti Gretchen in Church , which was criticized by Millais. However, this company was dissolved again at the end of August. Instead, they formed the Pre-Raphaelite Brotherhood , which was to become a fellowship rather than a real collaboration.

With William Holman Hunt , whom he had met at the academy, he maintained a joint studio from 1848. Millais was one of the founding members of the Pre-Raphaelite Brotherhood in 1848 and the most talented of them all.

In 1849 he exhibited his first Pre-Raphaelite picture in the Academy: Isabella , inspired by a poem by John Keats .

His painting Christ in His Parents' House sparked public protest in 1850. The support of John Ruskin changed public opinion in 1851, Millais showed Ophelia in 1852 . In 1853 he visited Scotland at the invitation of John Ruskin, whom he portrayed. In 1855 he married Effie , Ruskin's wife, after their marriage was annulled. The couple had seven children. To avoid the scandal in London society, they lived in Scotland until 1861.

By 1856 Millais had perfected his painting technique and was restlessly looking for new ways to express himself. He had realized that the precision of painting in the Pre-Raphaelite style was only one step in his development.

In 1861 he moved back to London with the family. Here he had great success with his children's pictures. His picture A Child's World by his grandson, which became famous under the name "Bubbles", became particularly well known . The following story is related: The picture exhibited in the Tooth & Sons Gallery, 5 and 6 Haymarket, London, in the spring of 1886 was bought by Sir Ingram, owner of Illustrated London News . He wanted to use them to make printing plates for the 1886 Christmas greetings. Thomas J. Barratt of A. & F. Pears saw the picture in Sir Ingram's office and bought it from him. The company Pears was a soap manufacturer and the boy with the soap bubbles ("Bubbles") from Millais became very well known as a soap advertisement for the company, which wanted to appeal to the higher earners.

In 1863 Millais was elected to the Royal Academy. By the late 1860s, Millais had become an extremely popular artist, including through book illustrations, history, genre and event pictures. He made a handsome income from selling licenses to publish his works as intaglio prints. From 1870 he worked successfully as a society painter and portraitist and received numerous international awards, including the Prussian order Pour le Mérite , the Belgian Leopold order and the French Légion d'honneur . In 1882 Millais was accepted as a foreign member of the Académie des Beaux-Arts .

On July 16, 1885, Queen Victoria ennobled him with the hereditary title of Baronet, of Palace Gate, in the Parish of St. Mary Abbot, Kensington , in the County of Middlesex , and of Saint Ouen, in the Island of Jersey . In 1886 the Grosvenor Gallery exhibited 159 of his works. Later his works were also shown at the Glasgow Institute of the Fine Arts .

In 1889 he was instrumental in setting up the National Portrait Gallery in London. In 1896, a few months before his death, the Royal Academy appointed Sir John Everett Millais as its President.

He died on August 13, 1896 in Kensington, London, and was buried in St. Paul's Cathedral. His eldest son Everett Millais (1856-1897) inherited his title of nobility as 2nd baronet.

Millais 'painting Christ in His Parents ' House , commonly called The Carpenter's Shop at the time , triggered one of the Royal Academy's biggest scandals when it was exhibited in the spring of 1850 . Faithfulness to nature was seen as blasphemy and in Millais “papist” tendencies, a not inconsiderable reproach in a religiously intolerant England at the time. One of the fiercest opponents was the writer Charles Dickens . He complained: "A hideous, crooked-necked, flaming redhead in a nightgown" . And about Maria: she was "so repulsive in her ugliness that she would stand out as a monster even in the most vulgar French tingle and the most shabby English bar" .

Queen Victoria was so troubled by the fuss that was being made about the Pre-Raphaelite that she had some pictures brought to her palace. Consideration was given to banning the Pre-Raphaelites from the Academy's annual exhibitions. Then John Ruskin , whose opinion was highly regarded by the public, came to their aid with two letters to the editor to the Times . The public attention and the laudatory criticism of Ruskin spurred the Pre-Raphaelites.

Millais illustrated a number of literary texts by well-known writers, including the novels Anthony Trollopes and the Moxon edition of Alfred Tennyson's Poems from 1857.

His paintings of beautiful young women were also very popular, such as B. Stella 1868. In the style of Sir Joshua Reynolds he painted “Hearts are Trumps” in 1872, the three daughters of Walter Armstrong - Elizabeth, Diana and Mary playing cards.

List of Presidents of the Royal Academy of Arts (PRA)