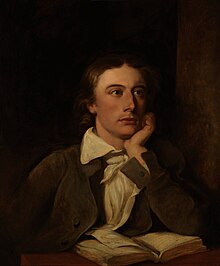 John Keats (born October 31, 1795 in London , † February 23, 1821 in Rome , Papal States ) was a British poet. Along with Lord Byron and Percy Bysshe Shelley, he is one of the most important representatives of the second generation of English Romanticism .

Born on Halloween 1795 in Moorgate, London, the son of a stable master and his wife in a rented stable, his first seven years were happy. That changed in 1803 when his father died of a fractured skull that he sustained when he fell off his horse. His mother remarried a short time later, but soon left her new husband and moved with her children to live with Keats' grandmother. Here Keats attended Clarke's School, where his love for literature was awakened. In 1810, however, his mother died of tuberculosis and left him and his siblings in the care of their grandmother.

With the headmaster's son, Charles Cowden Clarke , who also gave him additional school knowledge, Keats had a lasting friendship and love of literature (see also Keats' words “ you first taught me all the sweets of song ” in his Epistle to Charles Cowden Clarke ). The grandmother hired two guardians for her grandson, and they brought Keats out of school to teach him to a doctor. After a dispute with this, Keats ended his apprenticeship in 1814; he learned further at a local Hospital Guys Hospital , where a statue has been in memory of him since 2007 . In that year he devoted more and more time to the study of literature.

Ambrotype by Fanny Brawne (circa 1850)

The preoccupation with the work of Edmund Spenser , in particular with The Faerie Queene , became the turning point in Keats' development as a poet and prompted him to write his first poem under the title Imitation of Spenser . He became friends with Leigh Hunt , a writer who helped him publish his poems in 1816. In 1817 Keats brought out the first volume under the simple title Poems . Keats' works, however, were not well received. John Gibbons Lockhart referred to it in Blackwood's Magazine as poetry of socially low origin ( Cockney Poetry ) .

In the summer of 1817, Keats traveled to the Isle of Wight . During his work, his brother Tom soon joined him, who had to entrust himself to his care: Tom suffered from tuberculosis like his mother. After completing his epic poem Endymion , Keats went on a wandering tour of Scotland and Ireland with his friend Charles Brown . There he showed the first symptoms of tuberculosis; as a precaution he returned. At home, he found Tom's health deteriorating and learned that his poem Endymion - like his earlier poems - had become the target of derisive reviews.

In 1818 Tom died of tuberculosis and John Keats moved again, now to live in Brown's London home. There he met Fanny Brawne , who also lived in the house with her mother, and fell in love with her. The publication of their correspondence after his death became a scandal in Victorian society . 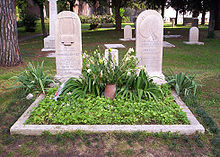 Keats' grave (left headstone), next to it the grave of his friend Joseph Severn

During this period, especially in the spring and summer of 1819, Keats wrote his most famous poems such as Ode to Psyche , Ode on a Grecian Urn , Ode to a Nightingale , On melancholy and To autumn . These poems show him as a master of lyrical meditations and reflective verses that transcend traditional conventions of the genre. Thematically, they deal with questions of beauty, transience and death.

The relationship with Fanny Brawne was broken off in 1820 when Keats showed clearer signs of the disease that raged in his family. At the suggestion of his doctors, he left the unhealthy London air in September 1820 and, at the invitation of Percy Bysshe Shelley , traveled with his friend Joseph Severn to Rome , where he lived in what would later become the Keats-Shelley House on Piazza di Spagna . In January 1821 his condition worsened. Keats died on February 23, 1821 without attempting to contact Shelley. Shelley did not learn of Keats' death until April 15, when he returned from Livorno to Pisa. Keats was buried in the Protestant cemetery in Rome. His last request was granted, on his tombstone are the words: “ Here lies One Whose Name was writ in Water. ”

“[…] Who but the supreme and perfect artist could have got from a mere color a motive so full of marvel: and now I am half enamored of the paper that touched his hand, and the ink that did his bidding, grown fund of the sweet comeliness of his charactery, for since my childhood I have loved none better than your marvelous kinsman, that godlike boy, the real Adonis of our age […] In my heaven he walks eternally with Shakespeare and the Greeks. "

“[…] Who but the most excellent and perfect artist could create a motif so full of miracles from a mere color: and now I am almost in love with the paper that touched this hand and the ink that carried out his commands; I have come to love the sweet grace of his handwriting; for since my childhood I have loved no one more than your wonderful relative, this godlike boy, the true Adonis of our time [...] In my heaven he goes forever next to Shakespeare and the Greeks. "

The main character of the film Dead Poets Society John Keatings is based on him.

Text of the sonnet Bright Star