Tennyson was the third of eleven children of clergyman and teacher George Tennyson . In addition to four years in elementary school, Tennyson was tutored by his father. In 1827, at the age of 18, a wealthy aunt made it possible for Tennyson to study at Trinity College , Cambridge . This noble gesture and the liberal world at the university made a big impression on shy Tennyson.

Between 1828 and 1830 Tennyson studied at Trinity College , Cambridge , but did not finish his studies. During this time he was a member of the Cambridge Apostles .

Tennyson had been writing poetry since he was a student and was able to publish the anthology Poems of two brothers in 1826 with his brothers Frederick Tennyson and Charles Tennyson . As a student, Tennyson was awarded the Chancellor's medal for English verse for a poem .

In the summer of 1830 Tennyson traveled with Arthur Henry Hallam through France to the Pyrenees. They wanted to deliver an amount of money raised in the United Kingdom to revolutionaries who rose against the Spanish monarchy.

When his father died in March 1831, Tennyson immediately left the university to help his mother. A year later, his friend Hallam got engaged to his sister Emily.

Hallam died unexpectedly on September 15, 1833. Tennyson was so shaken that he retired completely for the next four years. It was only when the family moved from Somersby to High Beech , Epping (near London) in late 1837 that Tennyson seemed to recover.

In early 1838, Tennyson and Emily Sellwood , his sister-in-law's sister , became engaged . Since Tennyson could still not make a living from his literary work after two years, the Sellwood family broke off the engagement.

On June 1, 1850, Tennyson published In Memoriam , an elegiac lament that he had worked on for 17 years over the death of his friend Arthur Hallam. With this poem he made the breakthrough; the criticism was overwhelming. On June 13, he and Emily Sellwood married and on November 19 appointed him Queen Victoria for Poet Laureate .

From 1851 to 1853 Tennyson lived in Chapel House , in Twickenham , where his son Hallam was born in 1852 . Tennyson wrote the Ode on the Death of the Duke of Wellington , published that same year .

In 1854 he published the famous poem The Charge of the Light Brigade in memory of the brave but bloody and costly attack of the British light cavalry brigade on a Russian artillery position in the Crimean War during the Battle of Balaklava that year. This episode, made famous by the poem, was later filmed twice - in 1936 by Michael Curtiz with the title The Betrayal of Surat Khan and in 1968 by Tony Richardson with the title The attack of the light brigade .

In 1864 he became an Honorary Fellow of the Royal Society of Edinburgh and in 1865 a member ( Fellow ) of the Royal Society of London . In 1876, Tennyson was elected to the American Academy of Arts and Sciences . In 1884 he was a Baron Tennyson , of Aldworth in the County of Sussex and of Freshwater in the Isle of Wight to peer collected, and it was also a seat in the House of Lords to. In the winter of 1888/89 he contracted rheumatic ailments from which he could no longer recover. A poll during this period found that Tennyson was the most famous Briton alongside Queen Victoria and Prime Minister William Gladstone .

A flu he caught in the spring of 1892 proved very persistent. Alfred Tennyson died of her, along with rheumatic attacks, early that morning on October 6, 1892, at his home in Aldworth. His eldest son Hallam, who later became Governor General of Australia , inherited his title .

His poems often dealt with English mythology (e.g. the Arthurian legend in Idylls of the King 1859) and history (e.g. The charge of the Light Brigade ) and thus offered a wide variety of templates for the Victorian art movements of the 19th century, like the Aesthetic Movement , the Arts and Craft Movement, which later ended in Art Nouveau , and the Pre-Raphaelite Brotherhood , which The Lady of Shalott in particular repeatedly addresses.

In 1869 the East Westphalian doctor, politician and poet Friedrich Wilhelm Weber translated several poems by A. Tennyson's Enoch Arden and Aylmers Field , and in 1874 Maud into German. Tennyson's best-known works include: 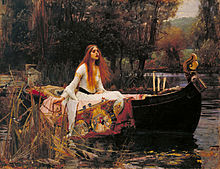 The Cape Tennyson in Antarctica was named after him.

Allusions and quotes from Tennyson's works are still common, even in popular culture. In the feature film The Dead Poets Club , a few verses are recited by Alfred Lord Tennyson: "Come on, my friends, it is not too late to look for a new world ..." from Ulysses . The secret service chief M quotes other verses from the same poem during a parliamentary hearing in the James Bond film Skyfall , when an attempted murder was made against her, which failed because Bond successfully stood in the way of the attacker - alluding to old ones , indomitable virtues, as described in the poem: "... One equal temper of heroic hearts, / Made weak by time and fate, but strong in will / To strive, to seek, to find, and not to yield ."