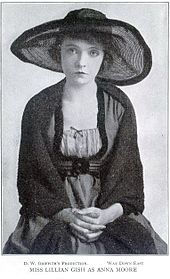 Lillian Gish starred in one of the film adaptations in 1915

Enoch Arden is a ballad by Alfred Tennyson published in 1864.

After an accident, the former fisherman Enoch Arden leaves his wife Annie and their three children to support his family in the merchant shipping . He is shipwrecked and stranded with two companions on an abandoned island. The other two die. Arden only returns after ten years. His wife, who thought he was dead, now has a child from his old friend Philip, whom she has also married. Enoch decides not to reveal himself to his wife or children and dies of a broken heart.

The verse epic spread rapidly and became a tremendous success. This show u. a. the twelve different translations into German, which appeared up to 1914, extensive film adaptations in the early silent film era (including with Lillian Gish ), the processing into an initially highly successful opera of the same name , a well-known setting as melodrama and extensive lecture tours on which Ernst von Possart recited the work to this very music by Richard Strauss . After the First World War , the ballad gradually fell into oblivion and is now also regarded in literary studies as a barely significant work by the author, which, despite initial public success, is not one of the enduring works of world literature. In 1984 Gert Westphal reread the story for a less successful record recording by a Swiss record company in German-speaking countries . The 1940 Hollywood comedy film My Favorite Wife, starring Cary Grant and Irene Dunne, is inspired by Enoch Arden ; in later films Jean Arthur and Doris Day played the main female roles.

Commons : 25 illustrations from the original 1866 edition  - collection of images, videos and audio files