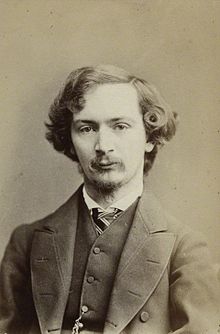 Swinburne as a model for D. Gabriel Rossetti's book, 1861 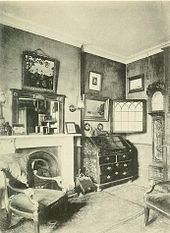 Swinburne's room in The Pines

Algernon Charles Swinburne (born April 5, 1837 in London ; † April 10, 1909 ibid), also AC Swinburne for short , was an English poet and author in Victorian times . His early poetic work revolved around topics such as sadomasochism , longing for death, lesbian fantasies or anti-Christian attitudes and was received as a major literary scandal.

Swinburne was the firstborn son of Admiral Charles Henry Swinburne and Lady Henrietta Jane, daughter of the 3rd Earl of Ashburnham. He spent his childhood at the family home at Capheaton Hall in Northumberland or at his parents' home in Bonchurch on the Isle of Wight . At the age of 12 he went to the boarding school in Eton . He studied from 1856 to 1860 at Balliol College at Oxford University , which he left without a degree. Here he got to know the Pre-Raphaelite movement, namely Dante Gabriel Rossetti , who worked on frescoes there. He later shared a house with him in Chelsea for a year. He admired Victor Hugo , whom he met personally in Paris in 1882.

In 1865 he drew attention to himself with the verse drama Atalanta in Calydon and the talent shown in it in handling words, rhyme and rhythm. The first volume of Poems and Ballads triggered a literary scandal in 1866, particularly because of the depiction of sadomasochistic eroticism. Swinburne is known to have had a strong lifelong affinity with spanking . In October 1868, Guy de Maupassant saved the poet's life on the coast of Étretat in Normandy .

The Songs Before Sunrise , published in 1871, are inspired by Swinburne's admiration for the democrat and freedom fighter Giuseppe Mazzini . In the elegy Ave Atque Vale from the second volume of the Poems and Ballads (1878), Swinburne's preference for Charles Baudelaire is expressed .

After a health breakdown ( attributed, among other things, to permanent alcohol abuse ) in 1879, Swinburne was taken in by his friend, the poet and critic Theodore Watts-Dunton , and lived in his house, The Pines in Putney , London , until his death . His late work turned increasingly to philosophy and literary criticism. In particular, Swinburne dealt with Shakespeare , Maria Stuart and the saga of Tristan and Isolde . In old age he was almost deaf.

Swinburne was buried next to his parents in Bonchurch, Isle of Wight.