The chapel of Eton College 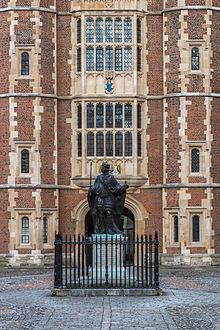 The statue of the founder in the schoolyard ( Schoolyard )

The Eton College is an independent, funded by school fees secondary school for boys (called Public School ) in Eton in the English county of Berkshire .

Eton College has around 1,300 boys aged 13-18 years old. With school fees of £ 13,556 (15,033 euros, as of the 2018/19 school year) per half or term (with three terms forming a school year), the school is one of the most expensive boarding schools in the world. In addition, there are additional fees for music lessons, excursions, etc. as well as the costs for the mandatory school clothes.

The college is known for the influence of its former students (so-called Old Etonians ) as well as its ancient traditions and very own team sports. This also includes the black school uniform. The school has been attended by several representatives of the British royal family and there are also 20 British Prime Ministers among its former students .

The King's College of our Lady of Eton was founded in 1440 by Henry VI. Founded as a charity school to provide free schooling to 70 poor students. Henry VI. transferred half the students and the principal of Winchester College (founded 1382) to Eton. Eton is modeled after this college and became popular in the 17th century.

Eton College owns Dorney Lake , an artificial lake used for rowing and canoe racing . This is where the rowing and canoeing competitions took place during the 2012 Olympic Games .

North side of the college with the Provost's Garden