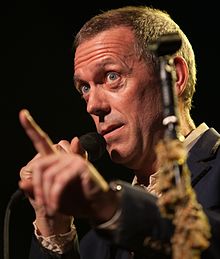 After graduating from Eton College , Laurie began studying at Selwyn College at Cambridge University (degree in anthropology and archeology ). During his studies, he joined the Cambridge Footlights , a theater group at the university that has been the starting point for a successful career for many British actors and entertainers. Laurie led the group from 1980 to 1981. At Cambridge Footlights he met Emma Thompson , with whom he had a relationship and is still good friends today. Emma Thompson introduced Laurie to new theater group member Stephen Fry in 1980 , Laurie's later partner in several British television productions. Laurie calls Stephen Fry his best friend.

At the British Junior Rowing Championships in 1977 Laurie, the son of 1948 Olympic champion Ran Laurie , took first place in a two-man with helmsman, at the Junior World Championships in the same year he finished fourth in this discipline. Laurie is still a member of the exclusive Leander Club today . Laurie was also part of the Cambridge eighth in the traditional Oxford and Cambridge Boat Race , which was beaten by the Oxford team in 1980 by a meter and a half. He also announced in a late-night show in 2005 that he had started boxing.

A passionate pianist, Laurie performs alongside other celebrities as the singer and keyboard player for the charity rock group From TV , which includes fellow actors Teri Hatcher (vocals), Jesse Spencer (violin) and James Denton (guitar).

Laurie has been married since 1989. He and his wife, Jo Green, have three children. His youngest child and only daughter Rebecca had a role in the 2001 film Wit . On May 23, 2007, Laurie was appointed Officer of the Order of the British Empire (OBE) by Queen Elizabeth II for his services in the acting arts.

From 1986 to 1995, Hugh Laurie and Stephen Fry formed a successful comedy duo in the BBC sketch series A Bit of Fry & Laurie . Laurie also wrote the scripts for the four seasons of this series, which aired in a total of 26 episodes.

Hugh Laurie became known to a wide audience through numerous engagements, initially mainly in British comedy series, such as B. the Blackadder series. Hugh Laurie is a great admirer of the writer PG Wodehouse and took on the role of Bertie Wooster alongside Stephen Fry as Jeeves' valet in the ITV film adaptation of the Jeeves and Wooster book series in the early 1990s . He also cast roles in feature films, including the comedies Peter's Friends , 101 Dalmatians and Maybe Baby and in children's book adaptations by Stuart Little . At the same time, Laurie repeatedly took on roles beyond the comedy genre, such as in some episodes of the spy series Spooks , in the Jane Austen film Sense and Sensibility and in the remake of The Flight of the Phoenix . In 2003 he played the lead role in the British television series Dr. Slippery (OT: Fortysomething ). For his title role as Dr. Gregory House in the hospital series Dr. House (2004–2012), in which he speaks with an American accent, was nominated seven times for an Emmy Award and in 2006 and 2007 received the Golden Globe Award . For the 5th season, which began in the USA in September 2008, Laurie received for the performance of Dr. House $ 400,000 per episode; so around nine million dollars a year. At the start of the eighth and final season, his salary rose to $ 700,000 per episode. He also starred in the 1986 music video for Experiment IV by Kate Bush and in 1992 with John Malkovich in the music video Walking on Broken Glass by Annie Lennox .

Hugh Laurie also works as a writer. In 1996 he published a novel (The Gun Seller) which hit the bestseller lists when it appeared in the UK. In Germany, the book was published in 1999 under the title The Arms Dealer , which was reissued in March 2008 under the title Bockmist . Hugh Laurie is working on his second novel, The Paper Soldier .

On April 29, 2011 his debut album Let Them Talk was released by Warner Music . During the recording he worked with Irma Thomas and Tom Jones , among others . The second album Didn't It Rain followed on May 6, 2013.

In the German-speaking world, Laurie appears in the television series Dr. House, Dr. Slippery and dubbed in the film Street Kings (2008) as well as in the series Chance by Klaus-Dieter Klebsch .