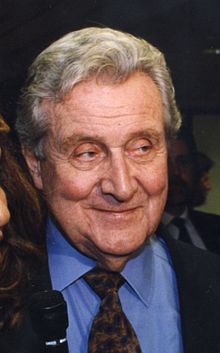 Daniel Patrick Macnee (born February 6, 1922 in London - † June 25, 2015 in Rancho Mirage , California ) was a British - American actor and radio drama speaker . Macnee was mostly identified by the public with the role of gentleman agent John Steed , which he played in the television series With Umbrella, Charm and Melon .

His father Daniel Shrimp Macnee was a horse trainer; he drank, gambled away the family fortune, and eventually left the family. Patrick grew up with his lesbian mother Dorothea Mary (née Henry or Hastings) and her partner Evelyn. He had to wear the kilt until he was eleven , even though the family lived in southern England. Macnee almost got expelled from Eton College for pulling up a player ring. After graduating from school, he first appeared as a stage actor. He had his first small film role in The novel of a flower girl (Pygmalion , 1938).

The Second World War interrupted his beginning film career because he was drafted into the Royal Navy . After the war Macnee attended the Webber Douglas School of Dramatic Art in London on a scholarship and continued his film career as a young "Jacob Marley" in A Christmas Story ( Scrooge , 1951). Disappointed with the limited range of roles, he left England and moved to Canada and the United States as a producer . In Canada he is considered a pioneer of television there.

In 1954 he went to Broadway with a company from the Old Vic Theater in London . He later moved to Hollywood , where he made various television and film appearances. His best-known films of the 1950s include Panzerschiff Graf Spee (The Battle of the River Plate , 1956) and The Girls (1957). In 1959 Macnee returned to England, where he benefited from his experience in Hollywood and Canada. He became co-producer of the television series Winston Churchill: The Valiant Years (1960).

Shortly thereafter, he received the role that made him known worldwide, John Steed in the television series With Umbrella, Charm and Melon (The Avengers , 1961) and in the 1998 film of the same name as the voice of Invisible Jones . After the series was canceled in 1969, he had difficulties getting offers due to the close connection of his person to this role. With the new edition of the series in 1976 under the title The New Avengers , he was given the opportunity to continue playing the role of John Steed. However, the magic and charm of the original series, especially the episodes starring Diana Rigg as Emma Peel , were not possessed by the new episodes. He was then seen in the television film Sherlock Holmes in New York (1976) as Dr. Watson at the side of Roger Moore . In 1980 he appeared in the adventure film The Sea Wolves Are Coming in a supporting role as Major "Yogi" Crossley , alongside Gregory Peck , Roger Moore and David Niven . The film turned into a box office hit.

In the 1980s and 1990s he was a guest in several American television series such as Gavilan (1982), Empire (1984), in 26 episodes of the television series Thunder in Paradise (1994) with Hulk Hogan and Night Man (1997). Less well known is his role in the television series Kampfstern Galactica (1978-1980) as the star of the lofty ruler of the Cylons and as Count Iblis. He also recorded various audio books.

He had bigger roles in Joe Dante's horror film The Beast ( The Howling , 1981) as Dr. George Waggner , in Rob Reiner's This Is Spinal Tap (1984) as Sir Denis Eton-Hogg and in the James Bond film James Bond 007 - View to a Kill ( A View to a Kill, 1985) as Sir Godfrey Tibbett . He also starred in the comedy the creature was not nice ( The Creature Was not Nice , 1983) with Leslie Nielsen in the lead role. After that, he also appeared in several television series such as In 80 days around the world ( Around The World In 80 Days , 1989) alongside Pierce Brosnan and as Dr. Watson alongside Christopher Lee . He made his last feature film in 2003 with The Low Budget Time Machine . In 2000 he worked as a narrator in documentaries about various James Bond films and about Ian Fleming .

He had a brief guest appearance as the driver of the Oasis group in the video clip for the song Don't Look Back in Anger .

Patrick Macnee's German voices were spoken by Gert Günther Hoffmann and Hans Sievers, among others .

Patrick Macnee died in June 2015 at the age of 93 in his California home town. He left behind his son Rupert, daughter Jennifer and a grandson.

In 1968 Patrick Macnee received the Golden Bravo Otto in Germany and in 1969 the bronze Bravo Otto from the youth magazine Bravo . The Academy of Science Fiction, Fantasy and Horror honored Macnee with the Golden Scroll Award.