This article covers the character Dr. Watson , the companion of Sherlock Holmes. For the error analysis program of the same name in Microsoft Windows, see Dr. Watson (software) , for other meanings see Watson

Dr. Watson in a representation by Sidney Paget

Dr. John H. Watson is a literary character from the detective stories Sherlock Holmes by Arthur Conan Doyle . Sherlock Holmes' friend and constant companion acts as the narrative self . In his role as a mediator between detective and reader, he became a prototype in crime literature .

Sherlock Holmes sees Watson's pragmatism as an enrichment and addition to his own, somewhat eccentric character and values ​​him as a recipient of his deductive conclusions. In Doyle's tales, Dr. Watson as an educated man of common sense, against whom Holmes' outstanding achievements stand out all the more. 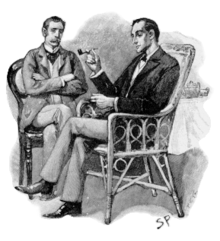 Dr. Watson (left) and Sherlock Holmes in a portrayal by Sidney Paget

Dr. Watson's biography , the first novel A Study in Scarlet (dt .: A Study in Scarlet is told), has parallels to life Doyles. Like Doyle, he is a war veteran and a doctor. Watson returned to London wounded and sick from the war. There he looked for an apartment in order to cure himself in peace. While looking for an apartment, he met the young chemist Sherlock Holmes through a mutual friend. He had rented an apartment that was too expensive for him at 221b Baker Street and was looking for a roommate.

According to A Study in Scarlet , Watson sustained a shoulder injury during the Second Anglo-Afghan War . In the second novel, The Sign of Four (dt .: The Sign of Four ) is told that he in the Battle of Maiwand was wounded in the leg.

In The Sign of Four , after successfully solving the Holmes case, Watson marries former client Miss Mary Morstan, sets up his own medical practice and moves out of the shared apartment. Nevertheless, he always finds time to support Sherlock Holmes in his cases. While Holmes' absence after his apparent death in The Final Problem (dt .: The last problem ) dies Watson's wife, as the Doctor in The Empty House (dt .: The Empty House ) reports. As a widower, he moved back to Holmes for a while. In The Case Book of Sherlock Holmes (Eng .: Sherlock Holmes' Book of Cases ) Watson is married again, the name of his second wife is not mentioned.

In Doyle's short stories and novels, Watson appears as a medium-sized, athletic man of Holmes' age who is often attractive to Holmes' female clients, and whose intellect is equal to Holmes', even if the two have different skills and educational backgrounds. Holmes values ​​Watson as an equal conversation partner who can help him out with information that the detective lacks for lack of interest. For example, Holmes has little knowledge of human anatomy and no political knowledge. Alluding to Samuel Johnson's biographer James Boswell Holmes said in A Scandal in Bohemia (dt .: A Scandal in Bohemia ) to Watson: "I am lost without my Boswell."

The middle name John H. Watsons is not mentioned in the stories and is therefore the reason for various speculations. Doyle's fellow writer Dorothy L. Sayers concluded from the short story The Man with the Twisted Lip , in which Watson's wife calls her husband "James", that the full middle name should be Hamish , the Scottish variant of the English James . Some non-canonical adaptations, such as the television series Sherlock , adopt this name.

With the figure of Dr. Watson Doyle created a prototype of crime fiction , which has since been used in numerous detective stories and is often referred to as the "Watson figure" or a sidekick . He is not the actual investigator, often portrayed as “ingenious”, who clears up the crime, but his loyal companion who reports the event and serves as a mediator for the reader, whom he always supplies with as much information as it does for the reader Action is necessary. It usually has three functions:

Furthermore, Watson's role and function is an essential part of a prototypical narrative analysis. Since almost all Sherlock Holmes stories are told from Watson's point of view, they are also heavily dependent on his perception. Watson's function as an explicit narrator (en .: overt narrator ) is reflected in the text by describing the external relationships of the characters and objects, as well as the language and thoughts of the character (s). This type of narrator also allows an assessment and commentary on the events. Since these essential functions are so excellently worked out by Doyle and, due to their immense importance, are indispensable, Watson is an important prototype of an explicit , authorial narrator in the first person (en .: overt, authorial, first-person narrator ).

Although Watson is the best-known embodiment of such a narrative companion, the character itself has a forerunner in the nameless first-person narrator of Edgar Allan Poe's stories about the private detective C. Auguste Dupin ( The Double Murder on Rue Morgue , The Secret of Marie Rogêt and The Stolen Letter ). Many later crime writers adopted this constellation, such as Agatha Christie in the first Hercule Poirot novel The Missing Link in the Chain in the character Arthur Hastings and also in Miss Marple's first appearance in Murder in the Rectory in the character of the Reverend Clement.

Adaptations in literature and film

In his novel The Name of the Rose in the characters of the Franciscan William von Baskerville and his accompanying Benedictine novice Adson von Melk, who admires the acuteness of his “master”, Umberto Eco not only alludes by name to the role models Holmes / Watson.

In the crime comedy Genie und Schnauze with Ben Kingsley as Watson, the relationship between the two is satirically reversed. Dr. Watson is a brilliant detective here who, in order to preserve his reputation as a doctor, hires a sane actor to play the role of detective Holmes.

In the television series Elementary , the male Dr. John Watson the female Dr. Joan Watson. Previously there was a female Watson in the film The Return of Sherlock Holmes , who was a descendant of Dr. John Watson and no variant of him.

In 1983 the asteroid (5050) Doctorwatson was named after the character.