William Nigel Ernle Bruce (born September 4, 1895 in Ensenada , Baja California , Mexico ; † October 8, 1953 in Los Angeles , California ) was a British actor who was primarily known for his appearances as Dr. Watson and Basil Rathbone in a total of 14 Sherlock Holmes films between 1939 and 1946. The character actor was mainly specialized in the portrayal of somewhat dumb, but good-natured Englishmen. 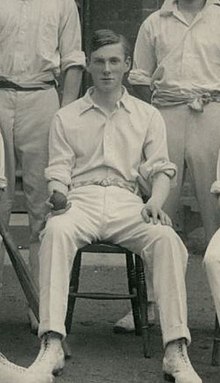 Nigel Bruce on the Abingdon School cricket team in 1912

Nigel Bruce was born in Mexico , where his parents were on vacation, as the son of the engineer and Sir William Bruce, 10th Baronet (1856-1912) and his wife Angelica († 1917). On his father's side, he comes from a line of the Scottish clan Bruce . When his father died in 1912, his older brother Michael inherited his title of nobility Baronet , of Stenhouse in the County of Clackmannan . Nigel Bruce attended Grange School in Stevenage and the renowned Abingdon School in Oxfordshire . During his service in the First World War , Nigel Bruce was seriously wounded in France in 1914, so that he had to spend most of the war years in a wheelchair .

In May 1920 he began his acting career on the theater stage, in autumn of the same year he accompanied the actors and actresses Henry V. Esmond and Eva Moore on their tour in Canada as a stage manager and actor. Eight years later, the theater actor made his first film in Great Britain. In 1934 he moved to Hollywood . Over the course of his career he has worked on more than 70 films and has appeared alongside the big stars in all genres. He has starred in dramas ( Fighting in the Mountains ), adventure films ( The Treason of Surat Khan ), children's films ( Lassie: Homesickness ), and comedies ( The Last of Mrs. Cheyney ). Directed by Charlie Chaplin , he played the role of Impresario in the limelight in 1952 .

As a rule, Nigel Bruce appeared in the role of friendly, often absent-minded gentlemen. In 1940 , Alfred Hitchcock used it specifically as a comic relief in the literary film adaptation of Rebecca . A year later, Bruce shot again with suspicion directed by Alfred Hitchcock. Here he plays Gordon 'Beaky' Thwaite , the nice-naive friend of Cary Grant , who dies under mysterious circumstances. In 1939 he had the role of Dr. Watson played alongside Basil Rathbone as Sherlock Holmes . The appearances in The Dog of Baskerville and The Adventures of Sherlock Holmes were so successful that a fourteen-part film series was created by 1946, each with Bruce in the role of Dr. Watson. Some complain that the Dr. Watson from the books, although not an outstanding detective, is an intelligent and capable character, but the way Nigel Bruce portrayed him and the stage directions make him appear simpler and more bungled and therefore do not do justice to the role. For others, Bruce was the ultimate Dr. Watson. Nigel Bruce played Dr. Watson also in several radio plays, also here together with Basil Rathbone.

Nigel Bruce was a member of the Hollywood Cricket Club and temporarily its captain. From 1921 until his death he was married to the British actress Violet Campbell (1892-1970), with whom he had two daughters. He died of a heart attack in 1953 at the age of 58 in Santa Monica , California . His ashes were buried in Los Angeles in the Chapel of the Pines Crematory. His last film Abduction in Singapore ( World for Ransom ) was released posthumously in 1954 .

In the German dubbed versions produced by German television broadcasting , Alfred Bohl spoke this role in ten and Hinrich Köhn in four films.