Max Ophüls ( ˈofʏls , in exile Ophul and from 1941 Opuls, actually: Max Oppenheimer; born May 6, 1902 in St. Johann , a district of Saarbrücken since 1909 ; † March 26, 1957 in Hamburg ) was an important German - French film -, theater and radio play director . The Max Ophüls Prize is named after him and has been awarded annually to young German-speaking filmmakers since 1980 as part of the Saarbrücken film festival named after this prize .

Ophüls (he adopted this artist name in 1920) was born in Saarbrücken as the son of the Jewish textile merchant Leopold Oppenheimer and his wife Helene. The house where he was born in Försterstrasse in the Nauwieser Viertel is still there today. Initially, Ophüls embarked on a career as an actor. He played at the Aachen Theater (1921–1923) and directed at the Dortmund City Theater for the first time. From 1925 Ophüls also worked for radio . He was also engaged as an actor at the Vienna Burgtheater in 1925 and 1926 and directed at the Akademietheater . At the Burgtheater he met the actress Hilde Wall (1894–1980), who in 1926 became his wife.

Shortly after the premiere of his fourth production, Ophüls was fired in 1926 in the wake of the rise of anti-Semitism . From 1926 to 1928 he was engaged at the New Theater in Frankfurt . He then worked as a director in Breslau until 1930 , where he staged works by Klabund , Bulgakow , Hauptmann , Lampel , Kleist and Wedekind , among others , and received recognition for them. He then came to Berlin, where he assisted the Russian filmmaker Anatole Litvak in directing a dialogue. In 1931 Ophüls made his first film, which is now considered lost, Then I prefer cod liver oil based on an original story by Erich Kästner . After two more films in 1932, he had his breakthrough as a film director with the Schnitzler film adaptation Liebelei (1932/1933).

The rise of the National Socialists to power made it impossible for Ophüls to continue working in Germany. He left Berlin in March 1933; After a short stay in Saarbrücken, he went to Paris with his family , where he continued his work as a director and screenwriter almost seamlessly. In 1938 Max Ophüls became a French citizen. In 1941 he fled to America, where he directed several films between 1946 and 1949 under the Anglicised stage name Max Ophuls. In 1949 he returned to Paris from Los Angeles . Here he shot a few films until his death in 1957, of which Lola Montez is the best known.

Max Ophüls died of heart disease in Hamburg in 1957 and was buried in Paris in the columbarium of the Père Lachaise cemetery. His memoirs, published posthumously in 1959 , are titled Spiel im Dasein. A flashback .

Tomb of Max Ophüls in the Père-Lachaise cemetery in Paris

The opening credits of Montparnasse 19 contain a dedication to Max Ophüls, who died in 1957. 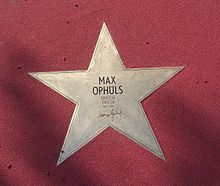 Star by Max Ophüls on the Boulevard der Stars in Berlin