The Nauwieser Viertel is a district of the Saarland capital Saarbrücken in the St. Johann district ( city ​​district Mitte ). It has the district number 132.

The quarter is located in the center of the state capital Saarbrücken. It is bordered by Stephanstrasse / Großherzog-Friedrich-Strasse ( B51 ) in the south, Dudweiler Strasse ( B41 ) in the west, Richard-Wagner-Strasse in the north and Egon-Reinert-Strasse in the east. Neighboring districts are clockwise (starting in the north): Am Homburg, Rotenbühl, Bruchwiese, St. Johanner Markt and Hauptbahnhof.

The residential area was built from the middle of the 19th century north of the old city center of St. Johann.

In the course of the economic boom in St. Johann after the main station was built in 1852, there was heavy building activity on the entire north side of the Saar. The Bruch- und Wiesengelände Nauwies was gradually drained. Originally, Nauwieserstraße was the only path through the area, which is particularly clear due to its curved course. Starting from this street, the rest of the street network of the Wilhelminian-era district grew, which is also called the Chinese district by long-established residents . 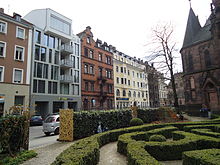 The park behind the Johanneskirche with the magnificent Wilhelminian style facades

For the houses built here between 1860 and 1920, the historicism of the Wilhelminian era is often the dominant architectural style. This is particularly evident in the middle Nauwieserstraße, but also in the upper Blumenstraße.

After the Second World War, the district increasingly fell into disrepair. In the 1970s, students particularly enjoyed the inexpensive and, in some cases, spacious apartments in old buildings and the diverse pub culture. In the late 1980s and almost all of the 1990s, the quarter was one of the major social hot spots in Saarbrücken. Drug problems, drug-related crime and prostitution gave the quarter in the center of the state capital a bad reputation. The streetscape was dominated by old, dilapidated houses, rents were low, and there was a relevant pub scene. From the turn of the millennium a clear turnaround became apparent. Extensive construction work began as part of an urban redevelopment program. By the middle of the decade at the latest, the quarter developed into a popular nightlife and residential area.

View from the quarter to the St. Johann town hall

Old and dilapidated buildings have now been extensively renovated. Many places were also planted with greenery and dirt spots such as Landwehrplatz and Max-Ophüls-Platz were fundamentally redesigned. This change process, initiated in the 1980s by the declaration as a redevelopment area, led to an all-encompassing change. The drug scene could be completely pushed out of the neighborhood, the streetscape improved, and the neighborhood's reputation improved. In recent years, it has developed its own pub and nightlife culture, which is also known beyond the city limits of Saarbrücken. A remarkable art and music scene has also developed and in many places the Nauwieser Viertel is already known as the “cultural heart” of the state capital of Saarbrücken. The scene ranges from exquisite restaurants to cooperative culture and work yards such as Nauwieser 19 .

Only the sharp rise in rental prices still has a negative impact on the quarter. This process has displaced many of the old residents of the district and is running parallel to the gentrification of individual districts in other large cities. The quarter is currently considered to be the “hippest” and hippest part of Saarbrücken. It has also found its way into film and television.

Analyzes by the city of Saarbrücken on the long-term voting behavior of its residents identified the district of Nauwieser Viertel as the stronghold of the parties Bündnis 90 / Die Grünen and Die Linke , which in the rest of the district always achieved results above the overall city result. The party The PARTY has always achieved results above the city-wide average since it ran for the elections. The results of the FDP and the CDU were always well below the city-wide average.

The quarter is connected to the Saarbahn (line 1) via two stops - Johanneskirche and Landwehrplatz . In addition, due to the central location of the district, most of the Saarbrücken bus routes operate at one or more of the five bus stops in the district.

Car traffic is of minor importance in the quarter, which consists entirely of 30 km / h zones . There is a car sharing station at Landwehrplatz . The most important means of transport, on the other hand, is the bicycle , which is allowed to travel in both directions on all streets, while most streets are one-way for cars , as well as pedestrian traffic .

The Otto-Hahn-Gymnasium and the Saarbrücken evening school are located in the quarter . The state capital Saarbrücken's music school is also located there.

The old fire station of the Saarland State Theater and the eight and a half cinema are located in the quarter .

Sons and daughters of the neighborhood 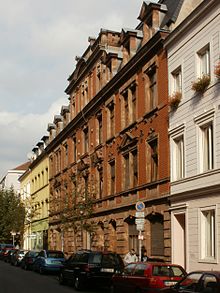 The house where Max Ophüls was born in Försterstrasse

The most famous offspring of the district is the internationally successful film director Max Ophüls . The house where he was born is still in Försterstrasse today. He is the namesake of the Max-Ophüls-Preis and the Max-Ophüls-Platz in the district.