The Catholic parish church of St. Peter in Ensheim

Ensheim is the easternmost district of the Saarland capital Saarbrücken and is located in the city ​​district of Halberg . As of December 31, 2018, 3,432 people lived there; it is therefore the third smallest district in the district.

Until 1974 Ensheim was an independent municipality in the district of Sankt Ingbert .

Ensheim is located around 9 km east-southeast of Saarbrücken city center, is separated from the rest of the city by the Ensheim valley , in which the Wieschbach flows, and is located directly south of Saarbrücken airport . On the slopes of Ensheimer Höhe (approx.  321  m ; location of the airport) in the north, Wickersberg ( 361.4  m ) in the west and Ormesberg, it is on both sides of the small Aubach, a northern tributary of the nearby Saarbach . The small Wieschbach tributary Erlenbach rises directly to the northwest of the village .

The place name on " -heim " belongs to a place name type that was often chosen in the early Middle Ages . The written tradition begins in the 12th century. In 1121 the St. Martin monastery in Lubeln owned the fourth part of the church in Onsheim . In 1264, the Wadgassen Abbey acquired the Lubeln property in Ensheim and expanded it in the course of the following decades through acquisitions. Until the abbey of Wadgassen was dissolved in 1792, the abbey was the landlord in Ensheim. In 1816 Ensheim became Bavarian and belonged to the Palatinate (Bavaria) .

After the First World War , the Versailles Peace Treaty of 1919 determined the formation of the Saar area as a mandate of the League of Nations from the southernmost parts of Prussia and the westernmost part of the West Palatinate . From then on, Ensheim was no longer Bavarian, but belonged to the Saar area and later to the Saarland .

Up until the Reformation, Ensheim was a Catholic with a strong connection to the Wadgassen Abbey . 1575 was by the Count Philip III. from Nassau-Saarbrücken (1574–1602) introduced the Lutheran Confession . In 1680 the area around Ensheim was occupied by France, which, as part of its religious policy, restored the Catholic faith in the occupied territories. Even after France had to evacuate the annexed areas on the Saar due to the Peace of Rijswijk in 1697, recatholization continued.

Only at the beginning of the 19th century did Protestants move in, who were initially looked after from Kirkel-Neuhäusel . In 1852 a Protestant vicariate was set up in St. Ingbert , which included Ensheim, Eschringen and Ommersheim . Ensheim's former affiliation to the Palatinate still determines the church organization today. Ensheim is the only community in Saarbrücken that belongs to the Evangelical Church of the Palatinate (Protestant regional church) , while all other parts of the city belong to the Evangelical Church in the Rhineland . In contrast to other districts of Saarbrücken, which belong to the Diocese of Trier , the Catholic population belongs to the Diocese of Speyer , as does the neighboring community of Eschringen .

Analyzes by the city of Saarbrücken describe Ensheim as a stronghold of the CDU; all other parties regularly achieved below-average results there compared to the city as a whole.

Blazon : "Split, on the right in blue a silver abbot's staff emerging from the lower edge of the shield, on the left in silver three oblique, four-petalled red roses with golden lugs and green sepals."

The colors of the place are blue - white.

The abbot emphasizes that the place belonged to the Wadgassen Abbey, as well as the roses that are contained in the seal of this abbey (Madonna with roses). The colors indicate that it later belonged to Nassau-Saarbrücken.

The design of the coat of arms comes from the Saarbrücken State Archives.

In the list of monuments of the Saarland, some buildings in Ensheim and outside of the local area are listed as individual monuments. These include u. a. the Catholic parish church of St. Peter (hall 1755, extension hall 1834, transept, choir and tower from 1907 to 1909, furnishings from the 18th century), the provost's office of the Wadgassen monastery with surrounding wall (Propsteigarten, mansion around 1750, second half of the building was increased 19th century) and the Ensheimer Hof .

Among other things, there is a club for old tractors in Ensheim, the IG of the agricultural machinery friends Ensheim and the surrounding area . The association collects old agricultural machinery, especially tractors. The tractor meeting, which takes place every two years on the second weekend in July, is one of the largest in Saarland. 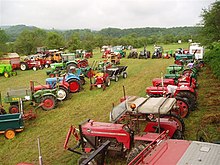 There has been a tennis club in Ensheim since 1968; In 1956 a model railway club was founded. In 1919, 1. FC Ensheim, the first football club in the area, was founded, and DJK Ensheim was founded the following year . With the TV Ensheim there is also a gymnastics club in Ensheim.