The Evangelical Church of the Palatinate (Protestant Regional Church) is one of 20 member churches ( regional churches ) of the Evangelical Church in Germany (EKD) and a member of the Conference of Churches on the Rhine . Like all regional churches, it is a corporation under public law and has its seat in Speyer . The church has 505,793 parishioners in 402 parishes (as of December 2018) and is one of the United Churches in the EKD.

Territory of the regional church

The area of ​​the Evangelical Church of the Palatinate (Protestant Church) includes the historical area of ​​the Palatinate , which belonged to Bavaria until 1945 and whose area - within the borders existing until 1920 - has been part of the states of Rhineland-Palatinate and Saarland since 1946 . The Rhineland-Palatinate parts formed an independent administrative district of Palatinate until 1968 , which included the independent cities of Frankenthal (Palatinate), Kaiserslautern, Landau, Ludwigshafen, Neustadt an der Weinstrasse, Pirmasens, Speyer and Zweibrücken as well as the districts of Bad Bergzabern, Frankenthal, Germersheim, Kaiserslautern, Kirchheimbolanden, Kusel, Landau in the Palatinate, Ludwigshafen am Rhein, Neustadt, Pirmasens, Rockenhausen, Speyer and Zweibrücken. In Saarland, the area of ​​the Evangelical Church of the Palatinate includes the entire Saarpfalz district , with the exception of the former Prussian St. Ingbert district of Rentrisch , as well as the places Ensheim (Saarbrücken) and Eschringen (today districts of Saarbrücken ), Schnappach (district of Sulzbach ) , which both belonged to the St. Ingbert district until 1974, and the Ostertal Osterbrücken, Hoof, Niederkirchen , Bubach , Marth and Saal, as well as Hauptersweiler, Seitzweiler, Oberkirchen and Schwarzerden , which today belonged to the district town of St. Wendel (until 1947 to the Palatinate district of Kusel ) .

Union Synod in Kaiserslautern in 1818

The area of ​​today's Palatinate belonged to several territories in the old German Empire . The largest part belonged to the Electorate of Palatinate . Here the Reformed direction had prevailed during the Reformation . After the Congress of Vienna in 1815, today's Palatinate was formed as part of the Kingdom of Bavaria , into which areas that had previously been Lutheran were also incorporated. Within this closed area on the left bank of the Rhine, which was known as the Rhine District , from 1837 Palatinate (also Rheinpfalz ), there were from then on Reformed and Lutheran communities.

Against this background, Bavaria initiated a survey of the parishes in early 1818 with the aim of finding out whether a union of Lutheran and Reformed parishes was possible. The majority of the congregations supported this, so that from August 2 to 16, 1818 a general synod in Kaiserslautern decided on the union of Lutheran and Reformed congregations. The new church was called the United Protestant-Evangelical-Christian Church of the Palatinate , which, however, was initially still under the consistory in Munich. In the heartland of the Kingdom of Bavaria on the right bank of the Rhine, however, unification did not prove possible. This led to the United Protestant-Evangelical-Christian Church of the Palatinate becoming legally independent from the consistory in Munich in 1848 and having its own consistory based in Speyer. 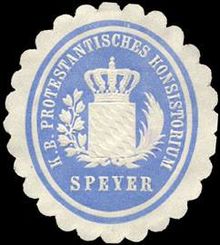 Seal of the Protestant Consistory in Speyer

Head of the Palatinate Church was the respective King of Bavaria as summus episcopus . The administrative authority, the senior consistory in Munich, later the consistory in Speyer, was headed by a president or director . After the First World War , the king in Bavaria had to abdicate (end of the sovereign church regiment ). The consistorial director therefore initially acted as head. Then the Palatinate regional church received a new constitution in 1920. With the constitutional amendment of 1920, the head continued to be the church president. The administrative authority was renamed the State Church Office .

In the presbyter and synodal elections in March and July 1933, the newly elected synod won representatives and sympathizers of the German Christians , who also occupied the official church organs, which is why supporters of the Confessing Church counted the Palatinate Church among the destroyed churches . In 1934, the synod elected Pastor Ludwig Diehl (1894–1982) to the newly created leadership position of a "regional bishop" and gave him extensive powers that were actually her responsibility. The Palatinate Synod voted for the merger of the regional church with the German-Christian dominated German Evangelical Church .

After the territorial destruction of the Evangelical Church AB of Alsace and Lorraine in 1940, the German occupation administration placed the Lutheran parishes in the CdZ area of ​​Lorraine under the Palatinate Church until the Allied advance in 1944 put an end to this.

The authoritarian office of the regional bishop was repealed in 1946. After a renewed revision of the constitution in 1976, the Palatinate Church took on its current name in 1978, after heated debates, Evangelical Church of the Palatinate (Protestant Church) .

Head of the regional church 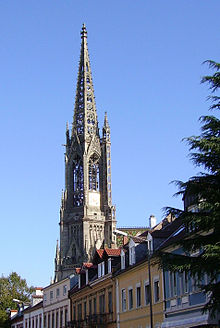 At the head of the Evangelical Church of the Palatinate (Protestant regional church) is the church president, who is elected by the regional synod for seven years. As a rule, his term of office ends when he turns 65. In the Palatinate Church, the choice of the leading clergyman is not limited to the group of pastors (i.e. the ordained).

Meeting of the regional synod

Presidents of the regional synod

Administration of the regional church

In the administrative hierarchy, the regional church is structured from bottom to top as follows:

At the base are the parishes as corporations under public law with elected church councils, the presbyteries . The members of the presbytery are called presbyters . Several parishes together form a church district (also called the deanery ) (in general administration comparable to a district ) , at the head of which there is a dean. The church districts are also corporations under public law and have the district synod, the members of which are appointed or called by the respective parishes, and a district council of churches.

The 15 church districts ( deaneries ) consist of 402 parishes , 32 of them in Saarland. This number was lower when the parishes were formed. In the course of the following years, however, the number increased, as the parishes in cities became so large as a result of influxes that they were divided up, creating new parishes. Due to the declining number of parishioners, the number of parishes within the framework of organizational mergers decreased by 22 parishes between 2011 and 2015.

The parishes of the Evangelical Church of the Palatinate (Protestant regional church) have been singing or singing in the last few decades mainly from the following hymn books:

Commons : Evangelical Church of the Palatinate  - Collection of images, videos and audio files

Member churches of the Evangelical Church in Germany