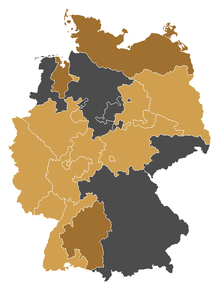 Member churches of the ICE in light brown, churches with guest status in dark brown (status: 2007). The Evangelical Reformed Church (Bavaria and Northwest Germany) is not shown.

The ICE thus mainly consists of Uniate or Reformed regional churches of the Evangelical Churches in Germany (EKD).

The following churches and member church associations have guest status:

The ICE was established on July 1, 2003. It replaced the previous Evangelical Church of the Union (EKU) and the Arnoldshainer Conference . The regional churches that had emerged from the church provinces of the former Prussian regional church ("Old Prussian Union ") belonged to the EKU ; For the Arnoldshain Conference in 1967, several United and Reformed regional churches came together. Since the Pomeranian Evangelical Church had been a member of the ICE and did not want to give up this connection with the other Union churches, the Evangelical Lutheran Church in Northern Germany, to which the Pomeranian Church had merged with the Evangelical Lutheran Church in Mecklenburg and Northern Elbia in 2012, became one Guest status granted in the ICE.

According to Article 1 Paragraph 1 of its constitution , the UEK is a corporation under public law (KdöR), as it continues the EKU's legal status as a KdöR. It was initially based in Berlin at the previous EKU church chancellery, and has been the seat of the UEK Hannover since 2007 .

The organs of the ICE are the full conference and the presidium.

The full conference consists of 81 elected synodals from the twelve member churches, appointed synodals and non-voting guest members from the guest churches of the ICE. The members of the full conference are elected by the member churches for a period of six years. It usually meets once a year and elects a chairman and two deputies, who also chair the Presidium. The Church President of the Palatinate Regional Church , Christian Schad , was elected chairman of the ICE on November 8, 2013 in Düsseldorf . His deputies are Church President Volker Jung (EKHN) and President Brigitte Andrae (EKM) . The full conference is the “parliament” of the Union. It has to make all fundamental decisions (Article 5, Paragraph 1 of the ICE's constitution), in particular to pass church laws or to approve EKD church laws for the ICE and to adopt the ICE's budget.

The member churches each send a representative to the Presidium of the ICE, the host churches send a permanent guest who is not entitled to vote. In addition, the head of the office of the ICE belongs to the presidium. The Presidium conducts the business of the ICE between the sessions of the full conference and prepares its sessions and resolutions. It is also responsible for all tasks that are not reserved for the full conference. It carries out the technical supervision of the office of the ICE, makes numerous decisions at sub-statutory level and concludes agreements for the ICE. In urgent cases, it can issue statutory ordinances which must be confirmed by the full conference at the next session, otherwise they lose their validity.

To support their work, the full conference and the presidium make use of two standing committees, the theological and legal committees, as well as one established committee, the liturgical committee. The member and guest churches send members; the Presidium also appoints university teachers of Protestant theology from the area of ​​the member churches to the Theological Committee .

The Church's jurisdiction of the ICE has been exercised by the Evangelical Church in Germany since 2010/2011.

The basic order defines the following tasks for the Union of Evangelical Churches (Article 3 Paragraph 1):

For some areas of activity, common regulations are made; according to Article 6 (4) of the Basic Regulation, these are:

In the respective implementing acts of the member churches, their traditions are taken into account. Therefore, the implementation of the common tasks in the various regional churches sometimes appears to be quite different.

Institutions and fields of activity