Nordkirche is a redirect to this article. Further meanings are listed under North Church (disambiguation) .

After negotiations since 2004 about a merger with the Evangelical Lutheran Church of Mecklenburg , the synod of the Pomeranian Evangelical Church declared in October 2006 that it wanted to examine a merger with the Evangelical Church of Berlin-Brandenburg-Silesian Upper Lusatia . In February 2007 the North Elbian Evangelical Lutheran Church offered the churches of Mecklenburg and Pomerania talks about the formation of a northern church . On March 17, 2007, the Pomeranian Church announced that it would hold talks with Northern Elbe. On March 31, 2007, the Mecklenburg Synod in Plau am See decided to also take part in the talks. On June 14, 2007, a joint steering group started exploratory talks in Lübeck . On November 26th, 2007, negotiations on a church merger began in Schwerin . After a meeting in Ratzeburg, the church leaders announced on April 28, 2008 that Lübeck would become the seat of the church office and the regional bishop or the regional bishop of the northern church.

On March 28, 2009, the three synods meeting at the same time in Rendsburg , Plau am See and Züssow each approved the merger agreement with the necessary two-thirds majority; the Synod of Northern Elbia in Rendsburg voted with 102 votes out of the 128 Synod, the Synod in Züssow with 44 members out of 58 and the Mecklenburg Synod in Plau am See with 39 votes out of 56 for the merger.

After the conclusion of the contract, the Association of the Three Churches, organized as a corporation under public law , drafted and adopted the constitution. For this purpose, a joint church leadership and a constituent synod were formed. While January 1, 2012 was initially set as the merger date, the constituent meeting of the church leadership of the Association of Evangelical Lutheran Churches in Northern Germany (VELKN) on May 26, 2009 in Hamburg saw the start of the new church on Pentecost Sunday , May 27 2012, determined to connect the foundation with the feast of the Holy Spirit . In order to bring the members of the three churches into contact, thematic study days and encounters should be invited; In addition, ten working groups were formed on topics such as theology, constitution, finance, administration, services and works as well as relocation. The chairman of the committee was Gerhard Ulrich .

At a meeting of the joint church leadership of the Association of Protestant Churches in Northern Germany on September 17 and 18, 2010 in Ludwigslust , templates for the constituent synod were drawn up. In addition, the committee decided on the proposed name Evangelical Church in the North , by then the name Evangelical Lutheran Church in North Germany had also been mentioned. The draft constitution contains 129 articles, the so-called introductory law was also discussed. At the first constituent synod of the association from October 29th to 31st, 2010 in Lübeck-Travemünde , there was the first reading of the draft constitution. The synod approved the first draft of the constitution by a large majority. After heated discussions, the majority of the synodians agreed on the name Evangelical Lutheran Church in Northern Germany . Church bodies and groups were able to comment on the draft constitution until summer 2011. At the third meeting of the constituent synod in Rostock- Warnemünde on January 7, 2012, the constitution and the introductory law were passed with the required two-thirds majorities. At Whitsun 2012 the merger was legally completed.

The constitution of the common church lays down the theological and legal bases. It contains the components of the basic articles, parish, parish, regional church, services and works, financial constitution, legal protection and final provisions. 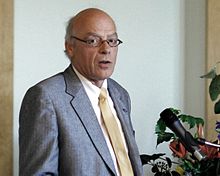 The north church is divided into the parish , parish and regional church levels . Each of these levels has the status of a corporation under public law with the right to self-government within the framework of the constitution of the Northern Church and the statutory provisions. Supraregional services and organizations such as Diakonie, Frauenwerk and youth ministry are based on the two-pillar model and are on an equal footing with the local community. Parishes within a parish can join together to form parish associations as an employing body. Church congregations are amalgamated into church regions for the purpose of cooperation if this is determined by a church district statute. In contrast to the parish associations, however, the church regions cannot be assigned any tasks and they also have no budgetary law.

The regional bishop or the regional bishop with seat in Schwerin is responsible for the leading spiritual service and the representation of the northern church towards the states and other churches. The cathedral in Lübeck and the cathedral in Schwerin serve as preaching sites .
The only candidate for election as regional bishop on February 21, 2013 was Bishop Gerhard Ulrich . He was elected with a large majority. The election committee of the regional synod proposed the Hamburg provost Karl-Heinrich Melzer and the Central German regional bishop Kristina Kühnbaum-Schmidt to succeed him . During the synodal conference in Lübeck Cathedral on September 27, 2018, Kühnbaum-Schmidt prevailed in the first ballot with 90 out of 150 votes. She took office on April 1, 2019.

The regional church office as the highest administrative authority has its seat in Kiel with a branch in Schwerin. Peter Unruh has been President since 2012 .

At the regional church level, the northern church is led by the regional synod, the church leadership and the regional bishop in joint responsibility. At the constituent meeting in November 2018, the Synod elected Ulrike Hillmann to succeed the President Andreas Tietze, who has been in office since 2012 .

The sermon church of the bishop in the Sprengel is St. Michaelis in Hamburg. The former bishop's church of Lübeck Cathedral is also located in the area of ​​the Sprengels .

The Schleswig and Holstein district also includes the North Schleswig community , a German-speaking community with several parishes in Denmark , which has the legal status of a free community there. The sermon church of the bishop in the Sprengel is the Schleswig Cathedral .

There are also memberships in the World Council of Churches (WCC), the Lutheran World Federation (LWF), the Conference of European Churches (CEC) and the Community of Evangelical Churches in Europe (CPCE).

In the tradition of the church fellowship of the Pomeranian Evangelical Church, the Northern Church has a guest membership in the Union of Evangelical Churches (UEK). Without prejudice to guest membership in the UEK, the law of the VELKD applies in the common church. The preservation of regional liturgical traditions in the context of the divine service book remains possible (point I.4.1 of the merger agreement).

The common church appoints theologically or legally trained representatives at the seat of the governments of Hamburg, Mecklenburg-Western Pomerania and Schleswig-Holstein (Section IV.9.1 Merger Agreement).

The three regional churches contributed to the northern church, which became the universal successor to the contracting churches (as of December 31, 2011):

Member churches of the United Evangelical Lutheran Church in Germany

Member churches of the Evangelical Church in Germany