This article describes a municipality in Northern Germany, for other meanings, see Jork (disambiguation)

Jork ( Low German : Jörk ) is a municipality in Lower Saxony in the Stade district on the south-western border with Hamburg and the center of the Altes Land , one of the largest fruit-growing areas in Europe. 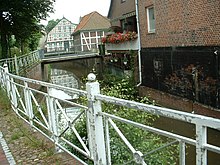 Jork is divided into the following districts:

The place Jork was first mentioned in 1221. In the period that followed, it developed into the administrative center of the Old Country. In 1885 Jork became the seat of the Prussian district of Jork , which in addition to the old country also included the city of Buxtehude and the municipality of Neuland. In 1932, Jork lost the function of an administrative center, as the district was dissolved and connected to the Stade district to the west of the Este , and to the Harburg district to the east . The Jork District Court no longer exists since 1972.

Jork in the Altes Land was the starting point for several new apple varieties. The Gloster 69 emerged as a cross between bell apple and Richared in 1951 from a breed at the local fruit growing research institute Moorende in the state. The jamba also found its origin here in 1955.

In 1776 the writers Gotthold Ephraim Lessing and Eva König married in Jork . To commemorate this, a wedding bench with a memorial plaque was set up in front of the Jork town hall and the Lessing Talks have taken place every November since 1992.

It is clear that the place name was initially Majork (e) and only later became Jork (e), Jork. There was a phrase "to dem jorke", "bei dem Schlamm, Schlick" contains Low German "gor (k)", thus "Schlamm, Schlick", also attested in Dutch "gor", which explains the older documents "Majorke" : “To dem jorke” merged with “demjorke” to “mejorke, majorke”. In addition, more and more "jorke, gorke" from the same word used to describe the settlement.

The following parishes belong to Jork: 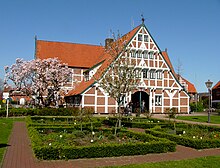 The council of the municipality of Jork consists of 28 council members. This is the specified number for a municipality with a population between 11,001 and 12,000. The council is elected for a five-year term in local elections. The current term of office began on November 1, 2016 and ends on October 31, 2021.

The full-time mayor is also entitled to vote in the council.

The last local election resulted in the following distribution of seats immediately after the election:

The full-time mayor has been Matthias Riel ( independent ) since November 1, 2019 . His deputies are Michael Eble (CDU) and Peter Rolker (FDP).

The municipal coat of arms of the municipality of York was of the grown in York painter and sculptor Carsten Eggers designed.

The old municipal coat of arms of the municipality of York was the heraldist Otto Hupp designed.

Well-preserved old half-timbered courtyards with magnificent gates, the so-called Altländer gates, can be found throughout the Altländer Land . The Obstmarschenweg runs along the huge fruit-growing areas and (historical) farms . Another tourist destination is the mill located on a piece of dike in the Borstel district . Of particular note is the town hall - the so-called Graefenhof - whose history can be traced back to the 12th century. In particular, the wedding room on the first floor is very well preserved and in proper style.

In the district of Moorende there is the Esteburg, a manor from the beginning of the 17th century. There are numerous old lighthouses near the Elbe dike, for example in Twielenfleth, Lühe and Mielstack.

Four bus routes operate in Jork, all of which are operated by KVG Stade and are connected to the Hamburg transport association:

There is a pathway , the "Altländer Bimmelbahn", for round trips .

Municipalities in the district of Stade