from Wikipedia, the free encyclopedia
This is the spotted version , flagged on August 23, 2020 . There is 1 pending change that has yet to be viewed.

Doris Schröder-Köpf , b. Köpf (born August 5, 1963 in Neuburg an der Donau ) is a German politician ( SPD ), journalist and book author . As a journalist, she has worked for BILD and Focus , among others . From 1997 to April 2018 she was married to the SPD politician Gerhard Schröder in his fourth marriage . During his tenure (1998–2005) she took on charitable tasks as the Chancellor's wife.

Köpf grew up as the daughter of a master mechanic and a housewife in Tagmersheim near Donauwörth and has a brother. From 1973 to 1982 she attended the Catholic St. Bonaventura grammar school in Dillingen an der Donau , from which she graduated from high school.

She completed a traineeship at Augsburger Allgemeine from 1982 to 1984 and then worked there as an editor. In 1987 she went to the Bild newspaper and was a parliamentary correspondent in Bonn. Kopf accompanied her then partner, the ARD - correspondents Sven Kuntze , 1990 after New York . Their daughter, who was born in New York in 1991, comes from this connection. Shortly afterwards, Kuntze separated from her and Köpf returned to Bavaria with her daughter. In 1992 she moved to Focus magazine in the domestic policy department.

In 1997, Köpf married the then Prime Minister of Lower Saxony, Gerhard Schröder . After her husband was elected Federal Chancellor in 1998, Schröder-Köpf was in the public eye to a particularly high degree. She was the patron of various children and youth projects, u. a. Number against Kummer , Stepkids and Teen Spirit Island , and the drug counseling facility Prisma .

Schröder-Köpf and her husband adopted a three-year-old girl from Saint Petersburg in 2004 and a boy in 2006. The family lived in Hanover's Zoo district for a long time and moved to the Waldhausen district in June 2009 .

From January 2011 to April 2012, Schröder-Köpf was a member of the supervisory board of the Karstadt department store group .

After 17 years of marriage, it was reported in March 2015 and finally in autumn 2016 that Schröder-Köpf had separated from her husband Gerhard Schröder. She has been living in a relationship with Lower Saxony's Interior Minister Boris Pistorius (SPD) since 2016 . 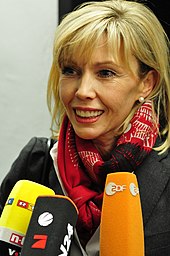 Doris Schröder-Köpf on the evening of the Lower Saxony state elections on January 20, 2013

In January 2012 she announced that she would run as a direct candidate for the SPD in the Lower Saxony state electoral district of Hanover-Döhren for the 2013 state election. At a constituency conference on March 21, 2012, she unified 25 out of 40 delegate votes in a battle vote, prevailing against long-time member of the state parliament Sigrid Leuschner and securing the candidacy. As a constituency candidate, however, despite a second majority in the SPD, she lost quite a bit, eight percentage points behind. Nevertheless, it moved into the state parliament via the state list .

In the Lower Saxony state election on October 15, 2017 , she was able to increase her share of first votes to 38.2 percent of the vote and win the constituency directly. With that she prevailed against the CDU candidate Dirk Toepffer , who got 36.7 percent of the vote.