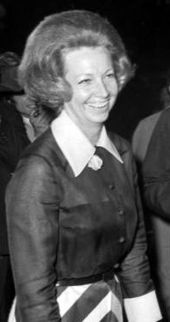 She grew up as the third oldest of the four sisters Hjørdis, Tulla, Rut and Olaug. Her father Andreas Hansen, who was employed as a private chauffeur at the Adlungstad estate in Stange , died when Ruth was three years old. Her mother, who was later described by her as a socialist and Christian, had to earn a living for the family after her husband's death. They moved to Kapp on the other side of Mjøsa , where their mother found work in a milk factory, and a few years later, when Ruth was seven years old and the milk factory was relocated, back again, near Hamar. After finishing school, 15-year-old Rut became a saleswoman in a bakery, then a maid and finally an apprentice tailor.

At the age of 16, Rut Hansen, who later described herself as a “born socialist”, joined a socialist youth group. The group was already active against the fascism threatening Europe when it was still a long way from Norway. After the unexpected German occupation of Norway in 1940, the group was banned, people continued to meet in private and obtained information by regularly listening to the Norwegian news from the BBC ; even after the possession of radios was banned. The group published the illegal newspaper "Radionytt - H7" for about half a year, which had a circulation of between 1,000 and 3,000 copies, was distributed by railroad workers and through reliable contacts and provided the Norwegians with politically important news. This made Rut Hansen part of the Norwegian resistance against the German occupiers.

When the group was exposed in the summer of 1942, Rut fled to Sweden with her sister Tulla, who was two years older than her . There she met her friend again, the railroad worker Ole Olstadt Bergaust, who was also active in the Norwegian resistance, whom she called Brum and who was married in exile in Stockholm in autumn 1942 . Both were employed by the press office of the Norwegian embassy. Brum was strong through a lot of sport, but he suffered from a "stubborn smoker's cough" that was initially considered harmless. Soon after, he became ill and had several lung operations. In 1946 he died of lung disease.

In 1944, Rut Bergaust got to know Willy Brandt , who emigrated from Lübeck and whom she first saw at their wedding in 1942. Although both were still married, they soon became committed. In 1947 she followed Willy Brandt to the Norwegian Military Mission in Berlin, where she worked as his secretary. Rut Bergaust had the rank of lieutenant. She gave up her position on the military mission at the end of 1947 after Brandt had already done so.

After the death of her husband and Brandt's divorce in 1948, the two married that same year. The wedding was performed by a Norwegian military chaplain who came to Berlin from his unit in the Harz Mountains. Since her husband's real name was Herbert Frahm , she was called Rut Frahm until 1949 . The marriage resulted in three sons: Peter (* 1948), Lars (* 1951) and Matthias Brandt (* 1961). Even if Rut Brandt dedicated herself to the “classic activities” of a politician's wife, political companions and observers agree that Willy Brandt would not have been able to pursue his political career without Rut at his side. With her, the politician was supported by a woman who earned him a lot of sympathy with her open, communicative nature and often acted as a "mouthpiece". It is attributed to her work that Willy Brandt's political interlocutors became friends.

In the years after Brandt's resignation as Chancellor, the two drifted apart. When Rut found out about her husband's relationship with his future wife Brigitte Seebacher in the spring of 1979 , she separated from him and filed for divorce. They met for the last time on December 16, 1980, the day of the divorce.

Even after the separation from Brandt, Rut Brandt remained present in the social life of the then federal capital Bonn , which documents that the affection shown to her did not stem solely from Brandt's social position. From 1982 the Danish journalist Niels Nørlund (1924-2004) was her partner. When she published her memoirs under the title "Freundesland" in 1992, she lived with Nørlund in Roisdorf near Bonn.

After Willy Brandt's death in October 1992, Rut Brandt did not take part in the state ceremony and the funeral. She hadn't been invited. According to her son Peter (on the occasion of Willy Brandt's 100th birthday), this corresponded to his father's wishes. But his mother told him that she would not have taken part in an invitation: “She wasn't stupid. That would have been the found food for the media. [...] the two widows. ”Nevertheless she would have liked to have received an invitation, but went to the grave the next day to say goodbye in her own way. In the years after Brandt's death it was often rumored in public that Brandt's third wife Brigitte Seebacher-Brandt had explicitly dismissed Rut Brandt, but there is no clear evidence for this. Egon Bahr reports in Zeit No. 47 from November 14, 2013 on page 16 of the dossier about Willy Brandt:

“After Willy's death on October 8, 1992, the chief of protocol at the Chancellery called me. He said: 'We have a problem: we don't know how to treat Rut Brandt during the state act.' To which I replied: I'll try to find out. I called Ruth and started stuttering. She laughed and said, 'I can imagine exactly why you're calling. But you can rest assured. I am not his widow. I'll take the opportunity to visit Willy when it's over. ' The protocol was relieved and it was no longer an issue. The rumor that Brigitte Seebacher-Brandt unloaded Rut is wrong. "

In August 2014 Bahr reaffirmed this correction to the deputy chairman and the managing director of the Unkel community foundation. 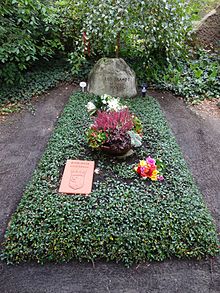 Rut Brandt moved to a nursing home in Berlin in 2004 and died in 2006 after a long illness at the age of 86. She was buried at the Waldfriedhof Berlin-Zehlendorf , where Willy Brandt's grave is also located. The grave has been dedicated to the city of Berlin as an honorary grave since July 12, 2016 .

About her relationship with her native Norway and with Germany, where she spent most of her adult life and where her sons were born, she said:

“I don't feel divided between Norway and Germany. I am at home here and there, and I live in both languages. I know Norway with the familiarity of childhood, I have lived and argued with Germany and suffered all of my adult years. "