This article covers the city in Norway. For further meanings, see Hamar (disambiguation) .

Hamar is a city in Norway . It is the administrative center of the province ( Fylke ) Innlandet and has 31,369 inhabitants (as of February 27, 2020). Hamar is located on the east bank of Lake Mjøsa , about 130 kilometers north of Oslo .

The forerunner was a power center near Åker , at the junction of the important north-south connection from the inland settlements to the coast. It led across the Mjøsa along the Vorma and Glomma rivers . There was also traffic from Mjøsa towards Sweden. The names of the surrounding farms indicate that the area was a religious center. Here sacrifices were made and this is where people met for the thing . In addition, the importance of the site is reflected in numerous grave fields and large individual burial mounds. The largest is six meters high and 60 meters in diameter.

Hamar was founded in 1152 on Mjøsa as a bishopric . It was the only medieval city ​​in Norway outside of the coastal regions.

The cathedral, monastery and school soon followed. For 400 years Hamar was one of the four to five central cities in Norway. The last Catholic bishop before the conquest of Hamar by the Danish general Truid Ulfstand in 1537 was Mogens Lauritsson .

Remains of the old cathedral in the protective building Domkirkeodden

View of the city from Mjøsa

In 1567 the cathedral was destroyed by the general of the Swedish King Erik , Johan Siggeson. As a result, most of the residents left the city. In 1587 the market was closed by royal order. Hamar lost its city status.

But in 1849 the city was rebuilt as an administrative and economic center according to a royal resolution. Towards the end of the 19th century, Hamar grew strongly, not least because of its strong food industry and the associated agriculture.

In 1992 the municipality of Vang was incorporated. Hamar has been a university town since Hedmark University was founded in 1994.

* after merging with the municipality of Vang 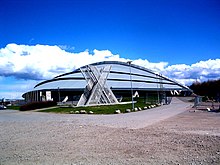 In addition to the Olympic Hall built for the 1994 Winter Olympics - better known as the Viking Ship ( Vikingskipet ) because of its shape - there are a number of other sights and museums:

Hamar station is on the Dovre Railway , electrified since 1970 , which runs from Oslo to Trondheim . This is also where the Rørosbahn branches off, which also takes another route to Trondheim, but is not electrified.

In Hamar there is a production facility of the crispbread manufacturer Wasabröd .

During the Winter Olympics in 1994 in nearby Lillehammer (Klein Hamar), Hamar u. a. Venue for figure skating and speed skating.

Hamar's football club Ham-Kam took third place as the best result in the Norwegian Tippeligaen in 1970 and made it to the semi-finals of the Norwegian cup competition several times.

In the Vikingskipet , the “Viking ship” , numerous sporting events take place, such as the World Speed ​​Skating Championships in 2013 and other events. Probably the most prominent example is the demo party The Gathering , one of the largest parties in the demo scene with over 5000 participants, which is held there every year over Easter.

Municipalities of the Fylke Innlandet