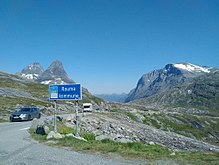 Municipality in Norway is the name for the lowest or local level of government administration. It is an area that has its own political and administrative unit. In Germany, Austria and Switzerland the (political) communities correspond to them .

Subordinate to the municipalities are the provinces (norw. Fylke ) and these are the Norwegian state (norw. Staten ).

There are two types of commune: In many communes there is a communal board ( communestyre ) elected by the people for four years , which is like a commune or city council, and another body called the Formannskap (presidium). The members of this body are elected by the local board from among its own ranks. You can pass the annual budget or tax resolutions without the local council. There is no formannskap in other municipalities. Instead, a Kommuneråd is formed. The mayor is called Ordfører (bokmål) or Ordførar (nynorsk). He and his deputy are not elected directly by the people, but by the members of the local council. In municipalities with Formannskap , both the mayor and the deputy must be a member of the Formannskap and thus also the municipal board, in the other municipalities they only have to be part of the municipal board, but not of the Kommuneråd.

All Norwegian municipalities are treated equally. They are responsible for primary and lower secondary education, social facilities, municipal road construction, water supply and wastewater regulation as well as land use planning. You finance yourself from your own tax collection and from the allocation of central funds.

The size and population of the municipalities vary greatly. The largest municipality in terms of area is Kautokeino in Finnmark with 9,704 km², the smallest is Kvitsøy in Rogaland with around 6 km². The most populous municipality is Oslo with 673,469 (as of January 1, 2019); in Utsira live the least population, namely only 210th

Usually, the municipalities that consist of a city get the lowest numbers in the respective province, for example Trondheim has the municipality number 5001. The other municipalities are numbered according to a topographical sequence. The number sequences have many gaps.

The term municipality for the smallest administrative unit in Norway was introduced in 1853 and replaced the former administrative unit Formannskapsdistrikt . The distinction between urban communes (bykommune) and rural communes (herredskommune) was abolished with the municipal law (kommunelov) of September 25, 1992. The terms urban commune and rural commune are still used in the Norwegian language, but no longer have a formal meaning.