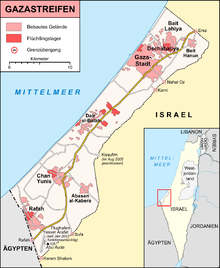 Chan Yunis on the map of the Gaza Strip

Chan Yunis ( Arabic خان يونس Chān Yūnis , DMG Ḫān Yūnis , in English oftentranscribedas Khan Yunis , Hebrew ח'אן יונס Khan Younis ) is a city and a refugee camp in Khan Yunis Governorate , the southern part of the Gaza Strip , which since 1994 de jure administered by the Palestinian Authority stands. The city of Chan Yunis and the refugee camp together have a population of around 220,000 (2014). Chan Yunis is the second largest city in the Gaza Strip after Gaza . Chan Yunis is one of the locations of the Al-Quds Open University .

The city is located around four kilometers from the Mediterranean Sea and eight kilometers north of the Egyptian border . In terms of climate, Chan Yunis is located in a semi-arid region with an average annual rainfall of 260 millimeters.

Chan Yunis was founded in the 14th century.

The city has its origin in an old caravanserai (Han), built by the Emir Yunis in 1387 AD. The name of the city Chan Yunis goes back to its builder Yunis ibn Abdallah an-Nauruzi ad-Dawadar . He was the chief secretary and one of the highest officials of Barqūq , the first sultan of the Mamluks in Egypt . Its job was to protect the caravans, pilgrims and travelers of the time. The place later became an important center for trade, the weekly market took place on Thursdays and attracted traders from the neighboring regions. During the First Arab-Israeli War in 1948/49, Chan Yunis was occupied by Egyptian troops. On August 31, 1955, the Israeli army carried out a military action against Chan Yunis, as a guerrilla action against Israel had taken place from here. The action that killed over 70 Egyptian soldiers led to a ceasefire between Egypt and Israel.

During the Suez Crisis in 1956 fighting again broke out in Chan Yunis between the Israeli army and the 86th Palestinian Brigade of the Egyptian army.

In this context, 275 Palestinian civilians were killed. While Israel claimed to have encountered military resistance, the Palestinians claimed that Israel deliberately murdered unarmed civilians.

In 1967, during the Six Day War , Chan Yunis was also affected by fighting and bombing.

During the Israeli occupation (1967–2005), there were repeated violent clashes in Chan Yunis between Israeli security forces and members of Palestinian underground organizations, in the course of which bystanders were also harmed. The city is considered to be the stronghold of Hamas .

In 2006 Hamas took power in the Gaza Strip. Since the Israeli border blockade in 2005, over 2,000 Qassam rockets have been fired into Israel by Chan Yunis, mostly in the southern Israeli city of Sderot .

At the end of 2017, the Qatar- funded Sheikh Hamad City project was completed, a new residential area for more than a thousand families.

The Chan Yunis refugee camp ( English Khan Younis camp ) is located not far from the city about two kilometers from the Mediterranean coast. It was built in 1949 in the west by Chan Yunis. Most of the residents are descendants of refugees who lived in villages around Beer Sheva or other communities in the Negev desert before the First Arab-Israeli War . In 2014 the refugee camp had around 46,000 inhabitants.

The refugee camp is divided into 13 blocks; some blocks in low-lying areas are flooded in winter. Most of the shelters are made of cement blocks and have asbestos roofs. There is no sewer network in the warehouse. All shelters are supplied with water from public and private wells.

The western block, "Block 1", was very close to the Israeli settlement block Gush Katif . Before the border closure of the Gaza Strip in September 2000, most of the refugees worked as workers in Israel or in local agriculture and fishing. In order to get to their work at the sea or to the farms in the Mawasi region near the sea, the workers had to pass an Israeli checkpoint at the entrance to the Gush Katif settlement block. Only when Israel withdrew from the Gaza Strip was the settlement area completely cleared in August 2005; the Israeli army began demolishing the houses immediately after the evacuation of the settlements.

Other refugees run shops and workshops. A public market is held every Wednesday.

The Relief and Social Services Department of the United Nations Relief and Works Agency for Palestine Refugees in the Middle East (UNRWA) has captured several hundred houses in the Chan Yunis refugee camp that were destroyed by Israeli Forces (IDF) operations . UNRWA helps rebuild houses, provides education and medical aid.

Chan Yunis has partnerships with the French city of Évry , the Norwegian city of Hamar and the Spanish city of Almuñécar .

The cemetery is located in the middle of the city in a heavily populated area with many avenues and small squares. The family grave of the al-Qidwas, Yasser Arafat's paternal relatives, lies on it .

Chan Yunis lay on the Sinai Railway from Beirut via Lod to Cairo from 1916 until the section in question was closed in the 1970s or 1980s (until 1967). Today most of the railroad tracks in the Gaza Strip have been dismantled.