from Wikipedia, the free encyclopedia
This is the sighted version , which was flagged on September 4, 2021 . There is 1 pending change that has yet to be viewed.

1669: Siege of Candia from a Turkish point of view 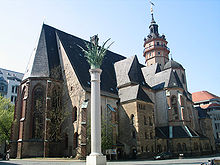 1989: The monument for the peaceful revolution in front of the Nikolaikirche Leipzig

1802: deciphering of the cuneiform script

2010: Kaiapoi train station after the earthquake